Proxima b - A Close Earth-like Planet 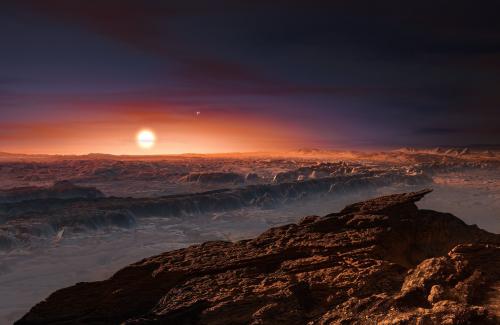 Wednesday, August 24th brought the announcement that the Pale Red Dot campaign, using European Southern Observatory (ESO) telescopes, has in fact discovered a planet in the habitable zone around Proxima Centauri, the closest star to the Solar System. Named Proxima b, the newly discovered planet is creating waves of awesome in science communities and is certainly a veritable dive into moments of unbridled geek-like freak outs. Though amazing, this nearby exoplanet is not quite the Earth twin that we may want it to be. 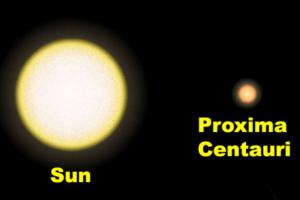 Proxima Centauri is a red dwarf star, which is quite different than the toasty G-type main-sequence star (the Sun) that we bask in on summertime beach days. Red dwarf stars are small and much cooler than the Sun, emitting so little light that they are not visible to the naked eye. The low mass and temperature of a red dwarf significantly changes the conditions we have become accustomed to while living in the Sun’s habitable zone. The habitable zone, also called the “Goldilocks zone”, is the distance from a star where temperatures are just right to allow for liquid water to exist on a planet’s surface. Proxima Centauri’s habitable zone is closer than the orbit of Mercury is around the Sun.

Over a period of 11.2 days, Proxima Centauri appears to move towards the Earth at about 3.1 mph (walking speed), then away from Earth at the same speed. Proxima Centauri is known to produce flares that can mimic the effects of an orbiting planet and these flares needed to be considered during the observation period. To compensate for this anomaly, observations that were taken during periods of flare activity were removed from the final analysis. The result is a stable Doppler shift pattern that the team used to calculate the planet’s mass and position. 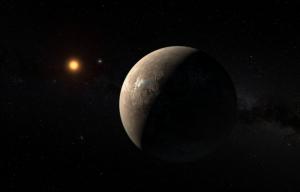 Proxima b is a rocky planet with 1.3x the mass of Earth. Given the super close habitable zone of Proxima Centauri, Proxima b orbits at a mere 5% the distance that Earth obits the Sun and completes one full orbital period in 11 Earth-days. At this distance, Proxima b receives around 66% the amount of energy from its parent star as the Earth receives from the Sun. Like Earth’s moon, the planet is likely tidally locked to the star, meaning that one side of the planet remains constantly in starlight, where the other side of the planet is always in darkness. As a result, seasons probably do not occur on Proxima b. Depending on rotational characteristics of the planet and Proxima Centauri, liquid water might only exist on the daytime side of the planet or along the tropical belt around the equator. Additionally, Proxima Centauri is a flare star (a dwarf star that occasionally increases in brightness due to magnetic activity) that produces intense X-ray emissions. Proxima b would need a stable magnetic field to deal with periodic flaring activity, otherwise its atmosphere would slowly evaporate or be blown off the planet into the stellar wind. 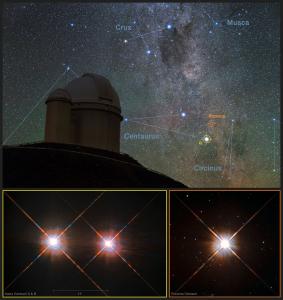 At this point, extensive theoretical debate is happening with the highest certainties laying in the discovery itself. The next step in identifying habitability is to measure what is in the planet’s atmosphere. Since we need the planet to visibly pass in front of Proxima Centauri (transiting) to get a glimpse of the atmosphere, we may be stuck for the moment. Proxima b does not appear to orbit in a position where it will pass into our line of sight of Proxima Centauri. These challenges, insights, and curiosity will make for extensive observations with the next generation of high powered science telescopes, including the James Webb Space Telescope (JWST), which launches in 2018.

The potential for a habitable planet orbiting the closest star to the Solar System is an awesome discovery and will certainly bring to light many new ideas and technologies designed to grab a better view of the planet, including a possible probe (see Project Starshot. Amazing things are happening and right now is the time to get involved!