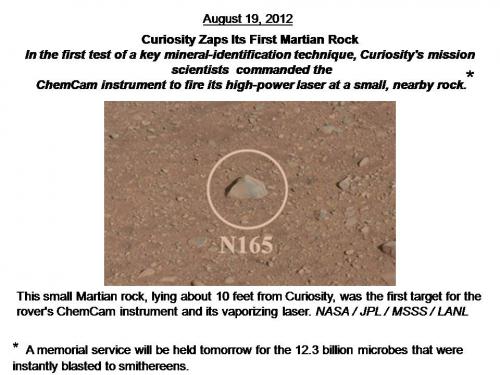 A neutrino walks into a bar… and keeps right on going.

I’ve loved cartoons and jokes for about as long as I can remember. There’s a scrapbook of cartoons somewhere in my attic that I had cut and pasted (literally) from magazines in my collection of “stuff” from my childhood. I was a big fan of Rowan and Martin’s Laugh-In from the late 1960s to the early 1970s. And I watched (and still do) episodes of The Three Stooges slapstick comedy episodes, which now broadcast along with parental warnings. “Pick two.” Then there are the old classics like the Marx Brothers, as well as Abbott and Costello. Kids, ask your parents and grandparents.

I also like parodies and spoofs that are really clever. From 1991 to 1994 a series created by Jim Henson simply called Dinosaurs, featured a Pangaean family of dinosaurs who spoofed every facet of human culture. There was DTV (MTV spoof) and an occasional spoof of the 1950s science show Watch Mr. Wizard called Ask Mr. Lizard with an assistant named Timmy who always ended up getting hurt during the experiments, prompting the line, “We’re going to need another Timmy!” See one of the Ask Mr. Lizard spoofs here: https://www.youtube.com/watch?v=MM1S27fPUQY. The whole show was very well thought out and executed, and always left me in stitches.

One of my absolutely favorite programs was Mystery Science Theater 3000 (MST3K for short). This cult series featured Joel, and later Mike, sent into orbit to watch “cheesy movies” as a plot by two mad scientists to eventually take over the world. Joel creates some “robot friends” as companions from parts of the ship to cope with this torture. Throughout their movie “reviews” they make jokes and wisecracking remarks at a lightening pace. You really have to pay attention because they come at you at the speed of light. At various intermission times they perform skits to pass the time. This show was hilarious. Here’s a link to the opening sequence: https://www.youtube.com/watch?v=VF7cO4t0o9c.

I know I left many shows off this brief review, but I wanted to leave space for a few astronomy, space and physics jokes. Many of the ones that follow I had heard before. Only a couple of them were new. And after much internet research to refresh my memory, I found many variations of the same theme.

Q: What happened to the astronaut who stepped on chewing gum? A: He got stuck in orbit!
Q: What type of songs do the planets like? A: Nep-tunes!
Q: Why can’t Saturn take a bath? Because he leaves a ring in the tub!
Q: Why couldn’t the astronaut book a room on the moon? A: Because it was full!
Q: How do you know when the moon is going broke? A: When it’s down to its last quarter!
Q: Did you hear about the bones they found on the moon? A: The cow didn’t make it after all!
Q: What should you do if you see a green alien? A: Wait until it’s ripe!
Humor for General Science Folks
I was up all night wondering where the sun had gone … then it dawned on me.
Did you hear about the new restaurant on the Moon? Great food … no atmosphere!
Q: Where are black holes more commonly found? A: Black socks.
The library book club is reading a book about anti-gravity. It’s impossible to put down.
A lecture on time travel will be held last Thursday at Seagrave Memorial Observatory.
Q: Why can’t you trust an atom? A: Because they make up everything.
Humor for the Scientifically Minded
Heisenberg is out for a drive when he’s stopped for speeding. The policeman says “Do you know how fast you were going?” Heisenberg says “No, but I know where I am.”
Q: How do astronomers see in the dark? A: They use standard candles!

Astronomers say the universe is finite, which is a comforting thought for those people who can’t remember where they leave things.
Einstein developed a theory about space. And it was about time too!
Copernicus is well known for his theory of the Sun centered scheme of our solar system. However, there is no truth that his parents once said to him at an early age, “Copernicus, when are you going to realize that the world does not revolve around you?”
There was a young lady named Bright
Whose speed was far faster than light;
She set out one day
In a relative way
And returned on the previous night.
Once a well-kept secret, NASA astronauts discovered the well-preserved remains of Alice Cramdem during one of their lunar excursions. Authorities assume it was one of those days.

Also, on several occasions I have seen a news item that I couldn’t resist modifying by digitally cutting and pasting! One of them accompanies this column.

These representations are just a handful of the more humorous sides of science. There are many, many more. If I left out one of your favorites just send me an email including it. I’m always looking for a good laugh.

I’ve often said that you either have a sense of humor, or no sense at all. What category best describes you?

In conclusion, there is a “Sirius” nature to this column. From July 28-30 there are two overlapping meteor showers you can watch for between midnight and dawn. These meteor streams do not produce high meteor counts, but a waning crescent Moon will not severely hamper observing as many shooting stars as possible from a dark sky location. The Delta Aquarids can produce about 20 bright, yellow meteors per hour at peak, while the Alpha Capricornids produce only about 15 of the same color. However, the Alpha Capricornids are noted for producing brilliant fireballs.

Aquarius and Capricornus, the constellations from which these shooting stars appear to emanate, will be just less than halfway between the southern horizon and zenith (straight up) around 2:00 a.m. Spend a little time on successive mornings to see if you catch peak activity. Observing only a few bright meteors will get you excited about the upcoming Perseid meteor shower display on the night of August 12-13 when many more shooting stars will blaze across the sky. Good luck and good observing.

I’ll leave you with these final words. I’m proud to be a supernova remnant!