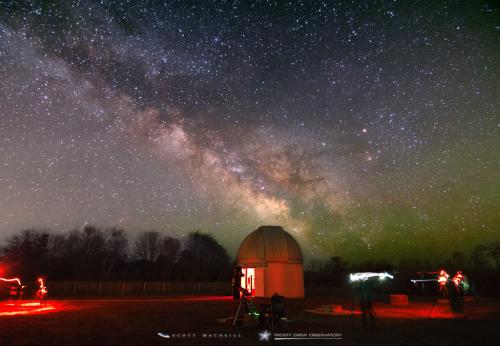 It's the best kept secret in/of ____________. You've all heard the phrase before. Just fill in the blank. It would be hard to believe there are any secrets in Rhode Island, the smallest state in the Union. But it is true because native Rhode Islanders are such provincial citizens. We even joke about packing an overnight bag and a passport if we have to cross one of the bridges spanning Narragansett Bay.

But if you wish to observe the heavens from perhaps the darkest site in Southern New England then you must shrug off those inhibitions and visit Frosty Drew Observatory (FDO), located in Ninigret Park off Route 1 in Charlestown. For you GPS folks, the address is 62 Park Lane, Charlestown, Rhode Island, 02813.

While it may be a secret to most folks north of North Kingstown, Frosty Drew Observatory is a jewel of an astronomical facility located down on Rhode Island’s south coast. On many a clear Friday night up to 600 stargazers of every knowledge level come to enjoy skies so dark you can almost reach up to touch the sky and scoop up a handful of stars. With so many visitors on one night, we can assume it is not a secret in the southern environs of our state. 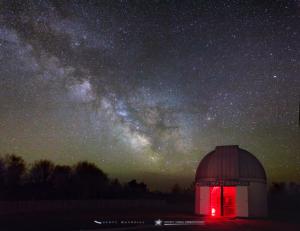 The Frosty Drew story started back on July 3, 1983, when a nature center opened on the grounds of the former Charlestown Naval Auxiliary Landing Field. It is located on the edge of the Ninigret National Wildlife Refuge and the Ninigret Conservation Area. The center, built next to a small pond, displays a variety of sea shells and other objects of the natural world. A deck on the edge of the pond allows one to watch birds and other wildlife close-up.

Then in 1988, a domed observatory was erected across the street. It currently contains a 16-inch Meade LX200 Schmidt-Cassegrain telescope. Every clear Friday night the facility is open to the public free-of-charge, though a donation of $1 per person is suggested. One should make every opportunity to visit Frost Drew because the skies are the darkest ones I know of anywhere in Rhode Island. Meteor observing is exceptional from this location, and if you have a telescope of your own, the incredible dark skies will provide excellent and unmatched views of our beautiful universe.

The only problem one could encounter during certain times of the year would be the fog. While it may be clear up in Pascoag, Scituate, Warwick, Coventry and even Wakefield, by the time one travels closer to Ninigret Park and Block Island Sound, you may soon find yourself in a dense fog bank. However, if the skies remain clear you are in for a treat.

The knowledgeable staff, including Director Scott MacNeill, and a complement of volunteers will be your guides to the wonders of the heavens. Whether it is the Moon, a planet, open clusters, globular clusters, galaxies, double stars or simply constellation identification, the views will be magnificent under steady and haze-free sky conditions. And during September our own Milky Way Galaxy stretches across the sky. 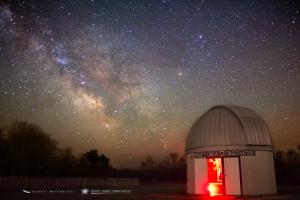 In addition, in 2010 a Sky Theatre was added to the Nature Center. This auditorium provides an indoor facility to hear astronomy and nature lectures alike. So should clouds keep the telescopes closed, Scott told me, "…we will open with presentations in the Sky Theatre and tours of the facilities." He also noted, "…we do post updates from the Observatory on Friday nights to our Twitter (http://twitter.com/FrostyDrewOBSY) and Facebook (http://www.facebook.com/FrostyDrewObservatory) about onsite conditions and what we are looking at, as well as a "Closing Up" post when we decide to start our shutdown procedures."

The Frosty Drew Observatory is open every clear Friday night year-round. Please check out the web page for weather closures before venturing down: http://frostydrew.org. Click on “Observatory and Sky Theatre” to access the Observatory home page. The website also contains other interesting information for stargazers of every interest level.

While the drive from northern Rhode Island to Frosty Drew can take upwards of one hour and fifteen minutes, if the night sky is clear your journey will be well worth the effort. Or, if you have a Friday off from work and have spent the day in the sun and surf at one of the south coast beaches, you can stop over at the Observatory before the drive home. Depending upon the day you may also wish to explore the Nature Center. Either way you’ll most assuredly enjoy your visit.

Recently, Bill Heath of Oxford, Massachusetts, visited FDO with his daughter and granddaughter for the first time. They not only viewed Jupiter and a couple of its moons, but also observed "the rings of Saturn for the first time (that) gave us all a thrill and confirmed our unique place in the Milky Way" he commented. "We concluded the hour and 15 minute ride was worth it and wondered how many other small observatories there may be within the same distance from home. The 'tease' of our Drew visit sparked a lively discussion of space exploration and the hopes of grand discovery in our lifetime. Keep up the good work 'Drew'—your viewing sparks the curiosity of young and old alike!" 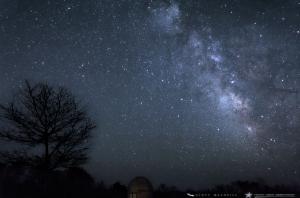 There are a couple of astronomical events to bring to your attention in September. If you have an unobstructed view of the western horizon after sunset on the 2nd, you will see bright Jupiter just above a very thin crescent Moon, with even brighter Venus to the upper left. The following evening the Moon will be positioned to the upper left of Venus.

Since June 20 (the summer solstice) the Sun has been moving steadily southward in our sky. On September 22 at 10:21 a.m. EDT, the autumnal equinox (the beginning of the fall season) occurs. A person standing on the Earth’s equator will see the Sun directly overhead at local noon on this date. And here in Rhode Island we will experience earlier sunsets and cooler temperatures, more conducive to observing the heavens.

And for those of you who’ve been keeping Frost Drew one of the best kept secrets of South County, I hope you will make the journey north to visit the astronomical facilities of your northern neighbors. It’s not that far. This is Rhode Island after all!!