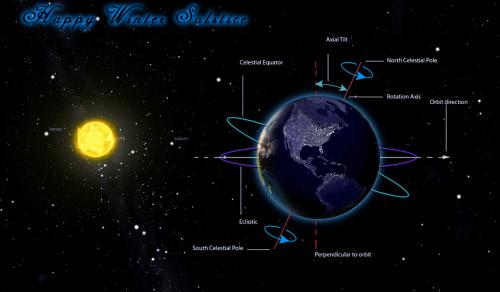 On Wednesday, December 21, 2016 at 5:44 a.m. EST the Winter Solstice will occur, marking the start of the Winter season.

The Winter Solstice is the point when Earth's axis is most inclined away from the Sun in the Northern Hemisphere and most inclined toward the Sun in the Southern Hemisphere. This will cause Earth's celestial equator to rise 23.4° above the Ecliptic, which is the path the Sun takes through the sky and represents the plane of the Solar System. During the Winter Solstice those residing on the Tropic of Capricorn will see the Sun at zenith (directly overhead) during midday and the Antarctic Circle will experience 24 hours of sunlight with the Sun dropping to the horizon at midnight, hailing the Midnight Sun. Consequently the Arctic Circle will see near 24 hours of darkness with the Sun just barely rising to the horizon during midday. 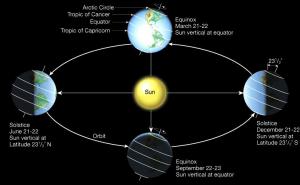 All that aside, the Winter Solstice brings us the long cold of Winter, festive Holiday lights, Smoking Bishop, much Dickens goodness, and the merriment of time spent with friends as the height of our Winter celebrations and the final approach to the end of the year come together.

Among all the awesome things happening during the start of the Winter season and the coming New Year, we may have a binocular visible comet coming to the Northern Hemisphere sky this February. Comet 45P/Honda-Mrkos-Pajdusakova will be rising higher every night as we move into early-mid February for all of us Northern Hemisphere residents. The comet could reach binocular visibility making for easy viewing and photographing.

All of us at Frosty Drew Observatory are hoping you have have a happy Winter Solstice!