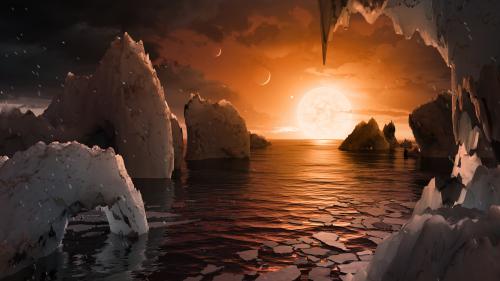 A potential view of the TRAPPIST-1 system from the surface of TRAPPIST-1f. Credit: NASA/JPL-Caltech

On Wednesday, February 22nd the discovery of seven Earth-like planets orbiting a red dwarf star that resides 40 light years distant, was announced. Though we frequently hear about Earth-like exoplanet discoveries, this one is the first time we have identified so many Earth-like planets around one star so close to the Solar System. Add in that 3 of these planets reside in the habitable zone, which is where liquid water can exist on the planet’s surface, and this discovery is taking the astro-geek world by storm.

The star, whose initial designation was 2MASS J23062928-0502285, is now called TRAPPIST-1. Discovered in 1999 by the Two Micron All-Sky Survey (2MASS), the star resides at nearly 40 light years distant towards the constellation Aquarius. It is a cool red dwarf star with a spectral classification of M8V. Shining at only 0.05% the brightness of the Sun, TRAPPIST-1 has 8% the mass of the Sun with a radius measuring 11% that of the Sun. 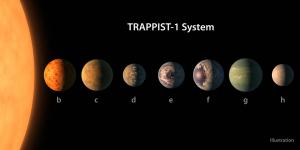 During September – December 2015, the TRansiting Planets and PlanetesImals Small Telescope (TRAPPIST) in Chile, observed the star system with the goal of identifying potential exoplanets. Their observations revealed three exoplanets that closely orbit the star. This discovery garnered the name TRAPPIST-1 for the star system. Then in the autumn of 2016, the NASA Spitzer Space Telescope, alongside several ground-based telescopes, confirmed the existence of the TRAPPIST discovery and found four additional planets around the red dwarf star, as well as measuring the size of the planets and initial estimates of their masses and densities. 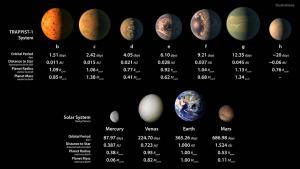 The TRAPPIST-1 planetary system is comprised of seven planets that all reside significantly closer to their parent star than Mercury does to the Sun. The planets have the designation b – h with TRAPPIST-1b having the closest orbit to the star and TRAPPIST-1h having the furthest. Though all planets in the TRAPPIST-1 system have the potential of harboring liquid water on their surfaces, TRAPPIST-1e, f, and g reside in the star’s habitable zone, significantly increasing that possibility. Orbiting so close to their parent star means that all seven planets are likely tidally locked, which is where one side of the planet always faces the star, with the other side in perpetual darkness. Additionally, the close proximity to their parent star gives them super fast orbital periods, with the shortest year occurring on TRAPPIST-1b at 1.51 Earth-days and the longest period occurring on TRAPPIST-1h at around 20 Earth-days. Planetary sizes range from 0.76 Earth-radii (TRAPPIST-1h) to 1.13 Earth-radii (TRAPPIST-1g), with TRAPPIST-1f being the closest in size to Earth with 1.04 Earth-radii. The distance between each planet’s orbital position puts them quite close to each other. This would allow for fantastic naked-eye views of neighboring planets, with some appearing larger than the Moon appears to us in our night sky. 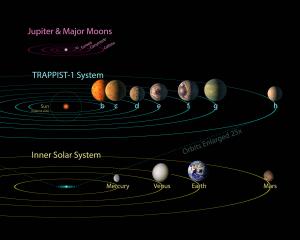 All of this awesomeness inevitably raises the question of the potential for life in this rather crowded planetary system. Being that substantially further observation and study of the system needs to happen before we can even begin to answer that question, there are some initial hints of the possibility. From what we can tell at this point, all planetary components are likely rocky planets (not gaseous like Jupiter) with a similar composition to Earth. Depending on atmospheric conditions (if atmospheres are even present), strong winds could balance out temperatures on the tidally locked worlds. TRAPPIST-1 being a red dwarf star has been identified as producing sufficient x-ray emissions and intense ultra-violet radiation to alter the primary and secondary atmospheres of the habitable zone planets. Though speculation is exhilarating, the real discoveries in this area will start coming in after the James Webb Space Telescope (JWST) is launched in October 2018, giving us the ability to detect chemical signatures of atmospheric elements and possible signs of life.

All the hype aside, this is yet another fantastic discover and staggering example of how far we have come with our understanding of sciences and engineering. Further observations with Hubble, Spitzer, and Kepler are being scheduled and will set the stage for follow-ups with the James Webb Space Telescope. The detection of the TRAPPIST-1 planetary system, alongside the growing number of Earth-like exoplanet discoveries in our galactic neighborhood, further substantiates the idea that the universe is teeming with worlds where life can start and possibly thrive, just as it has on Earth.