June is for Jupiter 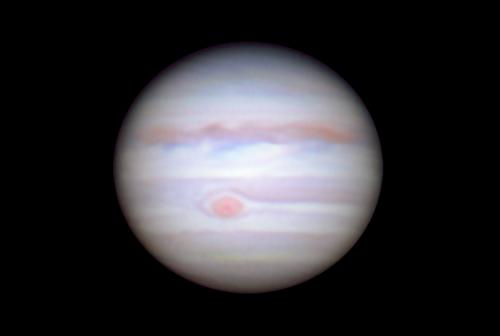 Jupiter and the Great Red Spot captured on May 8, 2018 during opposition at Ladd Observatory by Scott MacNeill.

Recently there’s been a drought of naked-eye planets to observe. Although amateur astronomers had been able to sneak a few peeks of Jupiter, Saturn, and Mars between midnight and dawn during spring, inclement weather once again limited their observations. Over the coming summer months we will explore Saturn and Mars. However, last month I promised to present a brief Jupiter observing guide. And now that our solar system’s largest planet is visible soon after sunset, June is for Jupiter.

Back on May 9, Jupiter was at its closest distance to the Earth for 2018 … just over 409,000,000 miles away. Now about a month later on June 1 that distance has grown to about 416,000,00 miles. Regardless, views of this massive planet (you could fit 1,321 Earths within its volume) and his four Galilean moons are still splendid.

Once the Sun sets and evening twilight deepens bright Jupiter will be easily noticeable high above the southeastern horizon in the constellation of Libra. If you have your own telescope you can begin observing immediately. Otherwise, you will need to visit one of the local observatories listed at the end of this column during their public observing nights. 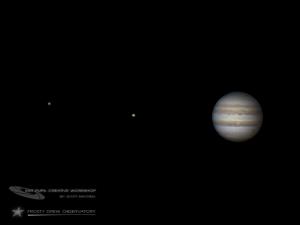 First-time telescopic views of Jupiter astound causal stargazers. They are often amazed at the wealth of detail a telescope provides. While the disk of the planet is quite impressive through even a small instrument, what most observers first notice are the small star-like dots accompanying Jupiter. These are the four largest and brightest of Jupiter’s moons, called the Galilean moons in honor of their discoverer, Galileo Galilei. On January 7, 1610, Galileo used a lens 1.5 inches in diameter with a magnification of only 20X to observe Jupiter. He observed three little stars in the planet’s vicinity. (The fourth one was either in Jupiter’s shadow, behind the planet’s disk, or in transit in front of the disk.) At first Galileo thought they were background stars, but after careful observation he deduced they were orbiting Jupiter.

Galileo’s telescopic work and the calculations that followed proved the Copernican Sun-centered theory (still controversial at the time) for the layout and motion of the solar system, versus the Aristotelian Earth-centered view. Jupiter and his retinue of moons was a solar system in miniature.

The Galilean satellites now have names from Greek mythology: Io, Europa, Ganymede and Callisto. When several of the moons are visible at the same time, they often appear in a straight line, parading around Jupiter in the plane of its equator. This arrangement presents many interesting phenomena for us earth-bound astronomers to observe. 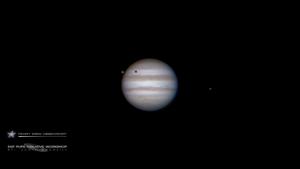 When a moon passes in front of Jupiter and casts a shadow onto the Jovian cloud tops, it is called a shadow transit. Besides seeing the satellite’s shadow, you may also see the bright disk of the satellite traversing Jupiter’s clouds at the same time, though this event is more difficult to observe. A moon may also pass behind the planet, which is called an occultation. Jupiter’s shadow can even eclipse a satellite as well; gradually the moon will either blink out or reappear. Also, it’s fun to watch all four moons line up on one side of the planet. I love to watch Jupiter over an extended period of time during the course of one evening because the view is dynamically changing as you watch.

While you can be pleasantly surprised at the eyepiece of a telescope by any of these satellite events during a random observing session, Sky and Telescope will help you plan ahead to ensure you experience a special Galilean satellite event.

Once you’ve explored Jupiter’s moons, turn your attention to the disk of the planet. Jupiter’s stripped appearance is due to the prominent dark bands/belts and lighter zones in Jupiter's cloud tops. A six-inch telescope or larger may be needed to catch a glimpse of the Great Red Spot, a centuries old storm in Jupiter’s atmosphere. Though not as red (some observers describe it as salmon colored) as it once was many years ago, it should be fairly easy to see if it has rotated into view.

Additionally, since its discovery the GRS has shrunk by 50%, and in more recent years its oval shape has become more circular. Some astronomers speculate that the storm may be dissipating. Only time will tell. Keep in mind that Jupiter rotates once in ten hours, making it possible to see the entire planet in one or two nights of observing. Visit Sky and Telescxopes GRS transit tool to determine when favorable views of the Great Red spot will occur.

Use whatever optical aid you have at hand, but if you wish to marvel at the beauty of Jupiter and all it has to offer, then set aside some time to visit one of the local observatories for a splendid visual experience. During the Seagrave Observatory celebration of Astronomy Day on April 28 we observed the GRS using the society’s eight-inch Alvan Clark refractor. 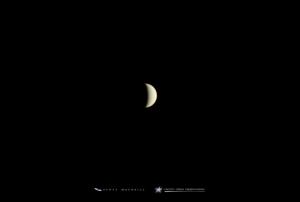 Furthermore, be sure to check out brilliant Venus in the west northwest sky after sunset all month. On the 15th a waxing crescent Moon will be below and to the right of Venus. On the night after it will be to Venus’ upper left

And finally, the summer solstice occurs at 6:07 a.m. EDT on the 21st. Summer begins in the northern hemisphere.

May all your skies be cloud free.