Picture Perfect for the Perseids 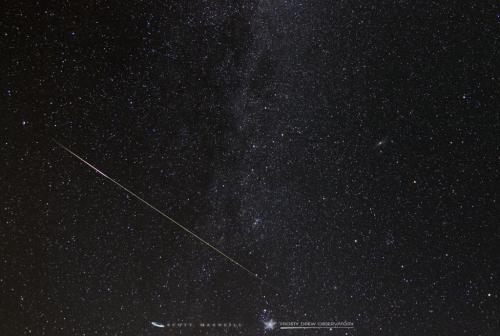 Rogue meteor captured during the Perseids at Frosty Drew Observatory.

If the sky is clear on the night of August 12-13 (Sunday night – Monday morning) I suggest you plan on selecting a dark sky location from which to observe the annual Perseid meteor shower. The Perseids are the second best display of shooting stars, ranking behind the December Geminids. Despite that status, this year’s favorable conditions may provide stargazers of all interest levels with anywhere from 60-120 meteors per hour.

Contributing to our good fortune in 2018 is a New Moon occurring the day before on the 11th. Therefore moonlight will not interfere with observing as many meteors as possible once you seclude yourself away from light pollution sources.

The Perseids are so named because they appear to radiate from an area of sky, called the radiant point, in the constellation Perseus. That star pattern is well up in the northeast sky after midnight. (See accompanying finder chart.) If you can locate a pattern of stars that looks like a sideways “M” or “W” (that’s Cassiopeia), Perseus is below it so you’re looking in the correct direction. You know you’ve seen a Perseid if you can trace the path of a meteor back to the radiant point. 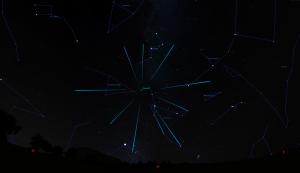 The particles comprising the shower are the remnants of Comet 109P/Swift-Tuttle that were stripped off the comet’s surface and deposited in “streams” throughout its orbit about the Sun. When the Earth passes through such a stream we experience a display of shooting stars. The Perseids are about the size of a thumb nail as they plunge into our atmosphere at 134,222 miles per hour (37 miles per second) and disintegrate. It is also a colorful display, producing shooting stars that are usually green, red or orange.

In addition, the best time to observe the Perseids is after midnight. As Perseus rises higher into the sky the number of meteors will increase. Don’t simply concentrate your gaze in that direction. The meteors can appear anywhere in the sky, so constantly scan as much of the heavens as possible without straining your neck. And some members of this shower are bright and often produce brilliant exploding fireballs. Fireballs may be more prevalent as we approach morning twilight. Why? At that time we will be hitting the meteor stream head-on!

With such promising prospects for this year’s annual Perseid meteor shower I think the odds are in our favor that we will observe more shooting stars than fireflies. Just hope the weather will cooperate.