What’s Up … in the Sky for November 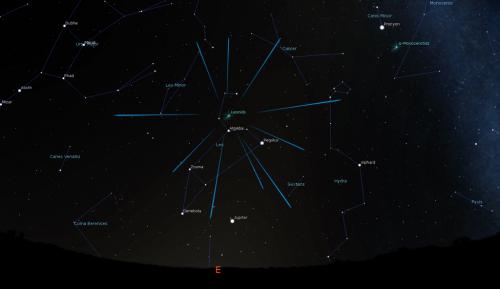 The first event we need to concern ourselves with is setting our clocks back one hour to Eastern Standard Time (EST) at 2:00 a.m. on Sunday, November 4. Remember the phrase “spring ahead and fall back/behind?” While this is not an astronomical occurrence, it can affect the time when you might wish to observe a particular phenomena. My columns always reflect EST unless otherwise noted. I don’t wish you to miss a time-critical sky event. Plus, I know we can all find a use for that extra hour— zzzzzzz.

Say goodbye to Jupiter for a while as he moves closer to the Sun in our sky in the first few days of the month. Just after sunset, if you have a dead horizon (down by the beaches), you’ll see him set in the south-southwest sky. You may even catch a glimpse of Mercury, the closest planet to the Sun. Mercury will be about five degrees to the lower left of Jupiter. First find Jupiter and then use binoculars to locate Mercury. A camera with a telephoto lens will definitely reveal the pair. Try various exposures. 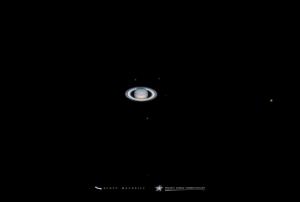 Saturn is also nearing the end of its evening apparition. This beautiful ringed planet can still be found above the teapot asterism of Sagittarius. If you haven’t been able to locate Saturn in the sky, after sunset on November 11 take a look towards the southwest. Use the waxing crescent Moon as your guide. Saturn will be just less than three degrees (six full moon diameters) to the lower right of the Moon.

Once again, unless you have access to an unobstructed view of the south-southwest horizon, tree-lines will prevent observing Saturn much beyond mid-November. So if the weather permits make an effort to view this “lord of the rings” as soon as possible.

Thankfully Mars will be visible throughout November. The cloudy and rainy weather of September and early October prevented local stargazers from observing this neighboring world. The Earth has been quickly moving away from Mars since its close approach back on July 31 when our two worlds were 35.8 million miles apart. By November 1 that distance will have increased to 73,392,000 miles. Some Mars’ surface detail should still be discernible through a telescope.

At midnight on the night of November 4-5 the Earth will pass through a stream of debris left in orbit by Comet Encke. The Taurids are fairly slow meteors that enter our atmosphere at approximately 17 miles per second. These often very bright yellow fireballs (meteors that explode and fragment into multiple pieces) comprise the Taurid meteor shower. You can expect no more than a half dozen shooting stars to emanate from the constellation Taurus. To locate Taurus find the V-shaped pattern that defines the bull’s face, or locate the Pleiades — the Seven Sisters. Luckily, a waning crescent moon rises around 3:50 a.m. locally and will not interfere with observing as many meteors as possible.

For the last few years our fickle New England weather has conspired to prevent us from enjoying many decent displays of shooting stars from the well-known major and minor meteor showers. We’ve got a couple more before the end of 2018, so let’s hope this intolerable pattern begins to change. On the night of November 17-18, the peak of the annual Leonid meteor shower occurs. A waxing gibbous Moon sets at 1:24 a.m. locally, so between then and dawn’s early light an observer in a dark-sky location can expect to see perhaps 15 meteors per hour.

These blue or green Leonids can blaze across the sky at around 44 miles per second as they hit the Earth’s atmosphere nearly head-on. The resulting display may produce many fireballs, with about half of them leaving trains of dust that can persist for minutes. The area of sky from where the meteors appear to radiate is in the Sickle (backwards question mark) asterism in Leo.

And finally, the Full Beaver Moon occurs on the 23rd , the day after Thanksgiving, at 12:39 a.m. EST. Native Americans gave it this name because they harvested beaver pelts at this time of year for warmth during the long and cold winters. I’m hoping my down coat will not see frequent use this winter season!

Always keep looking up towards the night sky to behold the majesty of the heavens.

Clear skies for all your observing adventures.