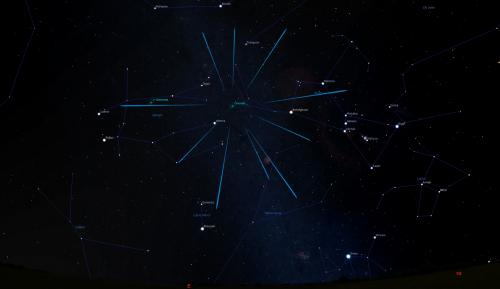 Once again the Perseid meteor shower of August locally succumbed to bad weather. For a few days before and after the peak night of August 12-13 the skies above southern New England were hidden by persistent clouds. These days being an amateur astronomer in Rhode Island and nearby Massachusetts are extremely frustrating. As each successive year comes and goes I am optimistic that a new year can’t be worse than the prior year. Unfortunately as we progress further into a new year I end up eating my words. Some of my associates jokingly blame me and suggest I move to California to potentially end their drought!

Well, I’m not ready or willing to make that journey. Californians suffer from other calamities more severe than clouds preventing folks from exploring the heavens. Despite our often inclement weather for many astronomical events I have written about, I will continue to provide guidance for observing future events in the hope we enter a more benevolent period of clear skies. 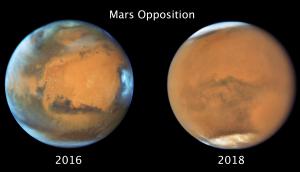 With that said, I wish to inform you that there is still time to observe Mars. The dust that got kicked up into that planet’s atmosphere by its global dust storm is settling out now. The telescopes at the local observatories have provided fair images of Mars’ south polar cap as well as surface markings. Back on July 31, Mars was at its closest to the Earth (35.8 million miles) until 2035. The Earth has been quickly moving away from Mars, and on October 1 our two worlds will be 55.6 million miles apart and increasing every day. Mars’ image through our telescopes has been growing smaller, so the earlier you can view our planetary neighbor the more detail you may observe.

Beautiful Saturn will also be visible throughout October as well.

The skies of October do provide stargazers with the opportunity to observe two meteor showers. The first one of the month, a minor display of shooting stars called the Draconids, occurs on the night of October 8-9. I haven’t written about the Draconids very often because the shower currently only produces only ten or less yellowish slow moving meteors per hour.

This year the Earth passes through the stream of debris more recently stripped off short period comet 21P/Giacobini-Zinner, the source of the Draconids, soon after the comet’s relatively close encounter (36 million miles) with our world. This circumstance could slightly enrich the meteor stream and provide astronomers with many more shooting stars than normal. However, the forecasts I’ve seen suggest no uptick in numbers. Regardless, I would strongly recommend giving the Draconids a try—just in case! Fortuitously the Moon will be New on peak night, so it will not interfere with observing as many meteors as possible away from light pollution.

Best of all, this meteor display is favorably observed between sunset and midnight when the constellation Draco is highest in the northern sky. All you have to do is find Ursa Major (the Big Dipper asterism). It will be sitting just above the northern horizon. Draco stretches between Ursa Major and Polaris, the pole star, which is the end star in Ursa Minor (Little Bear), the Little Dipper asterism handle. While the meteors will emanate from this region of the sky, scan east and west up to zenith (directly overhead). These particles are fairly slow moving, hitting our atmosphere at only 12.5 miles per second.

The second shooting star display of the month occurs on the night of October 20-21 when the Earth passes through the remnants of Halley’s Comet. It is called the Orionid meteor shower, because the meteors appear to radiate from within the constellation of Orion the Hunter. That radiant point is not far from the bright red super giant star Betelgeuse which represents Orion’s right shoulder (his perspective). Usually the Orionids are best viewed between midnight and dawn’s early light, but a waxing gibbous Moon (Full on the 24th) won’t set until around 3:38 a.m. local time. This scenario will leave you only about two hours of dark sky time until dawn’s early light. Just be sure to position yourself away from stray light sources to observe as many meteors as possible.

An observer can expect to count about 20 or so yellow and green meteors per hour once the Moon is out of the sky. The Orionid meteors disintegrate in our atmosphere after smashing into it at around 41.6 miles per second. The shooting star display is also noted for producing fireballs that create persistent dust trains as they blaze across the sky.

Despite having observed countless meteors during my 45 years as an amateur astronomer, I never tire of sitting out under a starry sky waiting for “burning rocks” to annihilate themselves in our protective atmosphere. Just be sure to duck if you happen to observe a “stationary” meteor. What’s that? Think about it. It means the meteor is heading straight towards you!

Good luck to all of us for October meteor observing.