The Event Horizon of a Black Hole 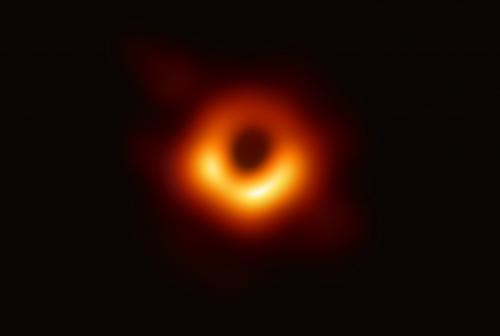 On Wednesday, April 10, 2019, the Event Horizon Telescope (EHT) announced that they had captured the first image of the shadow that is created by the event horizon of a black hole. Essentially a photograph of a black hole that shows more than just the X-ray emissions from the surrounding accretion disk. The black hole that was the target of the photograph is the super massive black hole that resides at the center of the Virgo A galaxy (M87) – one of the largest black holes we know of. 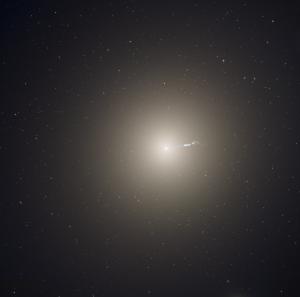 M87 is a huge elliptical galaxy found in the constellation Virgo. The galaxy resides at roughly the center of the Virgo galaxy cluster, at a distance of around 55 million light years from Earth. The Virgo galaxy cluster forms the central region of the larger Virgo galaxy supercluster, of which the Local Group is an outlying component (the Milky Way galaxy is part of the Local Group). Comprised of mostly old stars, M87 spans 240,000 light years in diameter, compared to the Milky Way galaxy at 100,000 light years in diameter. Being that the galaxy is elliptical, stellar components do not occupy a galactic disk, like they do in a spiral galaxy like the Milky Way. Instead they occupy a spherical region, which allows for a substantially larger total galactic mass. In this case, the total mass of M87 could be up-to 200 times the mass of the Milky Way.

The center of M87 plays host to a super massive black hole (M87*) that has 6.5 million times the mass of the Sun, making it one of the most massive known black holes in the local universe. Around the black hole is a rotating disk of ionized gas that is slowly falling into the black hole. This is called an accretion disk, and in this case, spans 25,000 AU (astronomical unit) in diameter (1AU = distance of the Earth from the Sun). As matter in the accretion disk approaches the event horizon, it becomes super heated and emits energy that we can detect. The event horizon of the M87* black hole spans about 267 AU in diameter. Being so large and placed nicely for imaging, M87* made for a great target to try for a first image. 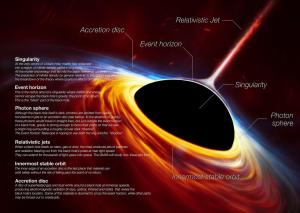 The event horizon of a black hole is the part of the black hole that actually forms what looks like a hole in space. Loosely described, it is the distance from the singularity - the central mass of the black hole, where gravity is so great that the escape velocity is greater than the speed of light. Escape velocity is the speed that an object would need to achieve to escape the gravity of a massive object. The escape velocity of Earth is 25,020 mph at the surface, and tappers off at higher altitudes. The object at the center of a black hole (a stellar remnant and all collected matter) has intense mass compacted into a relatively small area, making for so much gravity, that all paths light can take are directed towards the singularity instead of away, so even light cannot escape. The event horizon is the distance from the singularity where escape becomes impossible, even for light. This region appears to an outside observer as complete darkness. 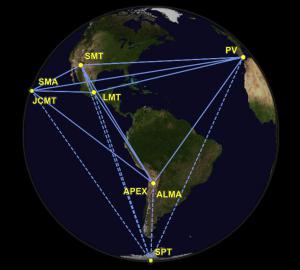 Being that there is no light emit by the event horizon, the radius of this region is quite small compared to other celestial objects, and the distance is so great, capturing an image becomes increasingly difficult. That’s where the Event Horizon Telescope comes in. Utilizing data collected concurrently from numerous radio telescopes from different regions on Earth, allowed for the creation of an interferometer the size of Earth. This virtual telescope enabled fantastically high powered observations of the M87* supermassive black hole during 2017. These observations allowed for enough resolution to capture the warped accretion disk and the shadow that the event horizon creates. Though the frequencies collected are outside of the visible spectrum of light, the image was converted into light that we can visualize. Note, the photo is a real image though not what you would see with your eyes if you were there. 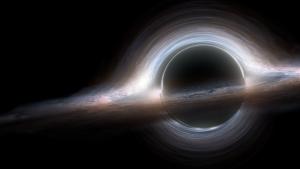 This is a fabulous achievement. The image not only shows us the shadow of a black hole’s event horizon, it further proves Einstein’s theory of general relativity, which states that we should see a dark region at the center of a black hole if located in a bright region. Using our understanding of physics in regards to high gravitational sources, the warping of space, and super heated matter, scientists were able to previously model what a black hole would look like. Now we know that we got it right! Check out the show stopping image. Then take a moment to visit the Event Horizon Telescope and learn about what they are doing, and what they have planned regarding Sagittarius A* - the super massive black hole at the center of the Milky Way galaxy. 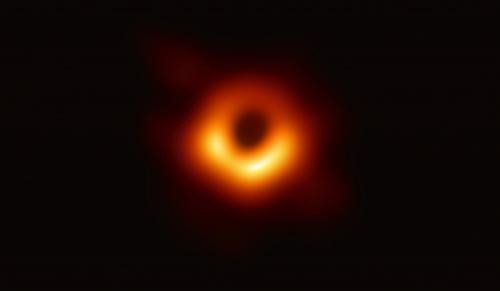