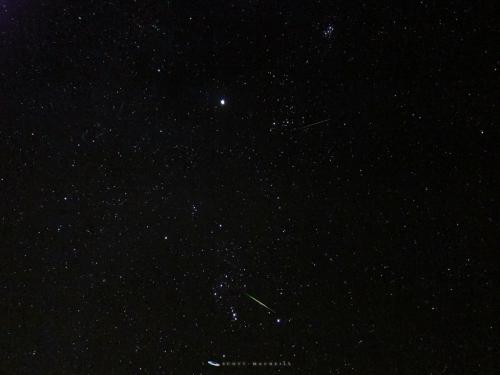 If recent events during the last few months are any indicator, Chicken Little may have been right. The sky is falling. The sky is falling. Back on July 24 at approximately 2:44 a.m. EDT, a soccer ball-sized meteor entered the Earth's atmosphere above Lake Ontario and became a bright fireball as it disintegrated. Fragments of this "space invader" most likely reached the ground. That same day, at around 11:04 p.m. a similar object was sighted along the east coast from Virginia to Maine. But wait! There’s more. The very next day a previously unknown asteroid estimated to be 187-427 feet across zipped past the Earth at 11:22 a.m., travelling around 45,000 miles per hour. Talk about close encounters! That one would have wreaked havoc had it collided with the Earth.

There’s a lot of space debris that the Earth passes through on its journey around the Sun. The vast majority are harmless remnants of comets or small pieces of asteroids. Everyday the Earth is bombarded with this material, and with greater frequency security cameras are recording the demise of the brightest of these visitors to our planet. After careful examination of eyewitness accounts, astronomers can determine the orbit of these bodies and determine if they are associated with a particular meteor shower. Two meteor showers were in progress at the time of the fireball reports. Many folks were lucky to view such a “fiery” display.

While bright fireballs are chance sightings, you can improve your odds at seeing shooting stars if you can observe a meteor shower from a dark sky location when the event is at its peak activity. During October we are fortunate to have both a minor and a major meteor shower to try our luck.

First up on the night of October 8-9 is the minor display of shooting stars called the Draconids. This shower currently only produces ten or less yellowish slow-moving meteors per hour. A waxing crescent Moon (First Quarter on the 5th) will brighten the sky somewhat and unfortunately won’t set until about 2:30 a.m. on the 9th.

However, unlike most shooting star displays, the Draconids are best observed between sunset and midnight when the constellation Draco is highest in the northern sky. All you have to do is find Ursa Major (the Big Dipper asterism). Draco will be above it. While the meteors will emanate from this region of the sky, scan east and west up to zenith (directly overhead). These particles are fairly slow moving, hitting our atmosphere at only 12.5 miles per second. Draco stretches between Ursa Major and Polaris, the pole star, which is the end star in Ursa Minor (Little Bear), the Little Dipper asterism handle. This shower of particles is debris shed by periodic Comet 21 P/ Giacobini-Zinner. As the night progresses watch the northern sky rotate around Polaris. By morning twilight, Draco’s head will be sitting due north about 20 degrees above the horizon.

The major meteor shower of the month is the Orionids on the night of October 21-22 when the Earth passes through the remnants of Halley’s Comet. While the Orionids are generally a decent shooting star display producing a peak rate of about 20 or so yellow and green meteors per hour between midnight and dawn’s early light, a bright last quarter Moon residing in the nearby constellation of Cancer will certainly reduce that forecast number. Moon rise is at about 11:00 p.m. on the 21st, so it will be overshadowing all but the brightest of the meteors, though a few can be observed before the moon rises. As an added bonus, please notice the cluster of stars to the Moon’s upper right—it’s the Beehive Cluster. Use binoculars for an enhanced view. 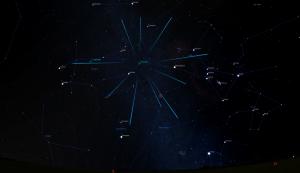 The meteors appear to radiate out of the sky just above Orion’s head (hence the name of the shower) and not far from the bright red super giant star Betelgeuse, which marks his right shoulder. The Orionid meteors disintegrate in our atmosphere around 41.6 miles per second, and they are also noted for producing fireballs that create persistent dust trains as they blaze across the sky. This redeeming attribute could mitigate the Moon’s interference somewhat. While Orion is an easy star pattern to identify, at 3:00 a.m. this giant constellation will be found high in the southeast sky.

Try to observe from a dark-sky location if you can. Also try to block the Moon from view as well. Get comfortable in a chaise lounge chair. Settle in for a couple of hours of observing. Hopefully there will be a few bright fireballs to keep you from falling asleep! All you’ll have to do to maximize your viewing experience is to find a suitable location well away from light pollution.

Let’s hope Mother Nature will cooperate to provide us with clear skies for all of our observing adventures.