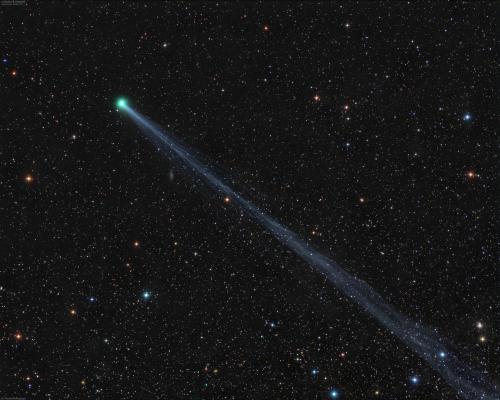 Last Friday we mentioned Comet C/2020 F8 SWAN, the new comet that is making serious waves in the comet lull of late. Well since last Friday, Comet SWAN has continued to brighten, undergoing what appears to be another outburst. Outbursts happen when the comet’s nucleus fractures under the intense energy of the solar wind. The fracture will expose a significantly higher amount of volatile elements from the comet’s nucleus, which increase the out-gassing of the comet. Since this is a new comet, we still have not calculated an orbital period, or the comet’s origins, though it certainly appears to be a new visitor to the inner Solar System. Comet SWAN’s tail has become amazing and continues to grow! Two days ago, the comet appeared to have gone through a slight dimming after this week’s outburst, but is now rebounding back up. We are unsure what is happening on the comet, as it could be experiencing another outburst. Regardless, one thing is certain – Comet SWAN is the best comet we have seen in years! Today, the comet will cross the ecliptic, becoming visible to Northern Hemisphere sky watchers. But the waning Moon will obscure our views for the next several days. At Frosty Drew Observatory, we are placing the morning of May 19th as the first opportunity to get out and catch a good view. Note that, at this time, Comet SWAN is naked eye visible. So take this week to gear up and prepare for potentially awesome views of the new comet. Also, check out this photo of Comet C/2020 F8 SWAN from May 2, 2020 by Damien Peach. Holy cow!

Have you been getting out for walks lately? With the current global lock down, having those daily walks with your family or neighbors offers us a chance to break free of the isolation and alienation that many of us are experiencing. If you are taking evening walks, you have certainly noticed Venus hanging over the western sky, intensely bright. Venus, which has been assuming the role of The Evening Star, has entered its last stance in that role for the next 13 months, with Venus continuing to wane as it approaches inferior conjunction. Since Venus is closer to the Sun than Earth, we have to look towards the Sun to catch a glimpse of the hellish planet. Since we are looking towards the Sun, we only see part of Venus’ daytime area (sunlit regions), with an increasing view of the area in shadow (nighttime regions). Inferior conjunction happens when Venus orbits in between Earth and the Sun, creating an alignment with the Sun, Venus, and Earth. This is also Venus’ new phase. After Venus passes inferior conjunction, Venus will end up on the other side of the Sun, and consequently begins assuming its role as The Morning Star, becoming increasingly visible in the morning sky before dawn. Over the next few weeks, as Venus continues to wane into a thin crescent, the size of Venus in the sky will increase, because Venus is orbiting closer to us. I have been working on a project at Brown University to capture Venus on a weekly basis. This will allow for me to create a sequence image that shows the waning of Venus’ visible daytime area, as well as the visible increase in size that we see. Over the next week I will begin to assemble the images captured to date. In the meantime, check out this image of Venu from this past week. Now step out over the next couple of weeks and have a moment with Venus each clear night, and add another excuse to get out of your confinement!