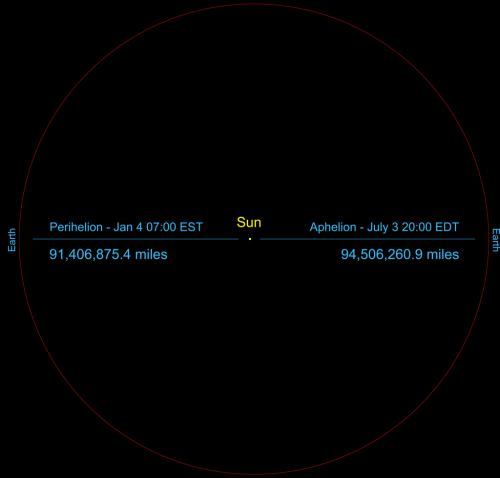 Aphelion in 2014 as it would look to scale if Earth were the size of one pixel.

Tomorrow morning, July 4, 2020 at 7:35 am ET, Earth will reach the point in our orbit when we are the furthest from the Sun for the year. This is called Aphelion and happens due to a slight deviation from a perfect circle in our orbit. This deviation is called Eccentricity, and was discovered by Johannes Kepler. Kepler realized that all orbits were not perfect circles and that Solar System bodies orbiting other Solar System bodies had both a perihelion (closest point) and aphelion (furthest point) from the objects that they orbited. Earth’s eccentricity is rather small compared to some of the other primary planets, sporting an ellipse of 0.01671123. Mars on the other hand has a much higher eccentricity of 0.0911941. Though Mercury takes the cake of the primary planets with an eccentricity of 0.205625. Though Earth doesn’t have the smallest orbital ellipse (Venus has that honor), our ellipse is quite minor. At perihelion, Earth is a mere 91,398,199 miles distant from the Sun. Perihelion happens in January. Tomorrow’s aphelion will bring Earth to a distance of 94,507,635 miles from the Sun.

For the thinkers, this may sound somewhat contradictory. Why is our closest point from the Sun during the winter season when it’s the coldest, and the furthest point from the Sun during the summer, when it’s the hottest. This is because our distance from the Sun is not what governs Earth’s seasons. Instead, our seasons are a result of Earth’s 23.4° axial tilt. Consider this, the concept that it’s the hottest during aphelion and coldest during perihelion only applies to Northern Hemisphere residents. In the Southern Hemisphere, that seemingly contradiction doesn't exist since the June Solstice is the Winter Solstice for Southern Hemisphere residents. Regardless, step outside tomorrow morning and hail aphelion with a spot of heat and humidity.

Overnight tomorrow night, July 4-5, 2020, a very dim penumbral lunar eclipse will occur. This time, the eclipse will be visible for North American sky watchers! A penumbral lunar eclipse happens when the Moon passes into Earth’s secondary shadow, called the Penumbra. In this region, only part of the Sun is obscured by Earth with most sunlight still making it to the Moon. A partial or total lunar eclipse always starts with a penumbral eclipse period, though the Moon will also pass into Earth’s primary shadow, called the Umbra. Tomorrow’s penumbral eclipse will be quite dim and hardly noticeable because only about 1/3 of the Moon will pass into the penumbra. Hey, we have to take what we get in North America, so make the best of it! Regardless, it’s certainly a good reason to get out and look at the Full Moon. The eclipse starts at 11:07 pm and continues until 1:52 am. Greatest eclipse, when the Moon is the furthest into the penumbra, will happen at 12:31 am. At that time, the top side of the Moon will be slightly dimmer than the bottom side. Let us know if you can see the difference. 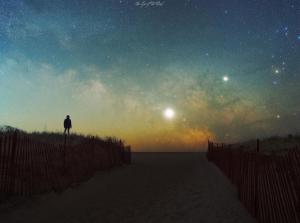 On Saturday, July 11 and Saturday July 18, we will host our popular Celebrate the Milky Way special event, Each of these events are occurring during the Phase III stage of Rhode Island’s reopening plan, which will allow for more visitors to attend these events. Considering our last Celebrate the Milky Way event sold out in under 3 hours, having the new max participants numbers will make these upcoming events way more accessible. The June 11th event will offer a maximum of 150 tickets. The June 18th event will push that max to 240 tickets. Ticket links will be posted to the event pages for each event on the day before the event, possibly earlier if weather is looking good. You can see all of our upcoming events for the next few months here. Let’s hope for clear skies because the July special events are the best opportunities to see the Milky Way over Frosty Drew Observatory!

Now celebrate Independence Day with some sunshine, a Full Moon, and a (rather dim) penumbral lunar eclipse. Perhaps these fantastic celestial events can make up for the lack of a parade or fireworks display due to the current pandemic. Have a fantastic Independence Day from all the astro-geeks at Frosty Drew Observatory!