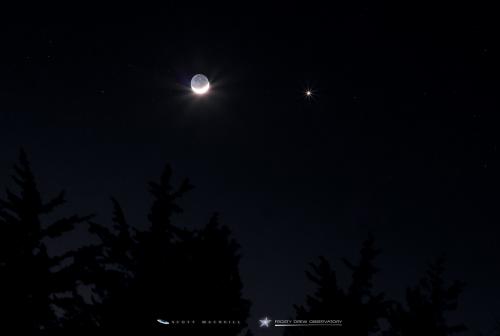 Venus and the crescent Moon in conjunction. Credit: Scott MacNeill

Tomorrow evening, Saturday, December 28, 2019, step outside about 30 minutes after sunset (sunset: 4:20 pm EST) and look to the Southwest. Venus and the super thin 7% waxing crescent Moon will be sitting about 2.5° apart as they put on a stunning celestial dance for the holidays. At that time, you will catch the conjunction in the deep blue of twilight, though as twilight wanes, the shadow side of the Moon will be strikingly visible as a ghostly glow alongside the bright crescent. This is called Earthshine, and happens due to sunlight reflecting off of Earth and onto the nighttime area of the Moon, causing it to glow subtly. At this time, forecasts are calling for clear skies over Southern New England, so get out and celebrate the season with a fabulous dance of the cosmos. 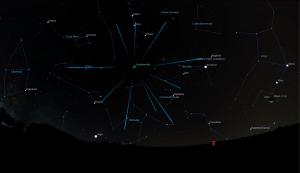 Overnight next Friday, January 3-4, 2020, the annual Quadrantid Meteor Shower will peak, bringing a potential increase in regular meteor upwards of 200 meteors per hour to the sky. The Quadrantid Meteor Shower has a very brief peak period, lasting only 3-6 hours in duration. Timings of the peak period have a significant impact on how awesome the shower will be. The radiant point of the shower, the defunct constellation Quadrans Muralis, is located in between the handle of the big dipper and the constellation Bootes. This region of the sky sits on the north horizon at 8:00 pm for our location, and will ride the NNE horizon until about 9:30 pm, after which it will start to rise. The higher in the sky the radiant point the better the shower. This year, peak period predictions place the start of the meteor shower peak at around 3:00 am EST on January 4th, with the shower wrapping up after sunrise. This is excellent timing for a few reasons. First the radiant point of the shower will be over 40° off the horizon and rising nearly overhead during the peak period, which is fantastic for catching the highest rates. Secondly, the 58% waxing gibbous Moon sets at 12:49 am, which will put the peak under fabulously dark skies. Now all we need are clear skies, and accurate peak prediction times. As usual Frosty Drew Observatory plans to open for the meteor shower peak, and considering it’s on a Friday night, it will coincide nicely with our regular Stargazing Nights event. Learn more about our Quadrantid event, then welcome the new decade with the second best meteor shower of the year, and the last of regular meteor showers until the Lyrids in late April. 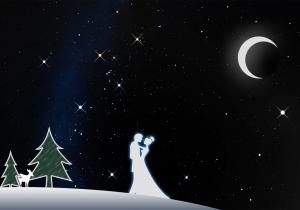 Save the Date:
On New Years Eve – Tuesday, December 31, 2019 from 7:00 pm to 9:00 pm, Frosty Drew Observatory will open for quick bout of stargazing to shake off the decade and start the 2020’s. Our event follows the annual New Year’s Eve bonfire that the Town of Charlestown puts on in Ninigret Park (home to Frosty Drew Observatory), which starts at 4:30 pm. What better way to ring in the New Year than a night of fire and stars! So add Frosty Drew to your night of year-end revelries and send off the decade in cosmic style!

Have a safe and Happy New Year from all the astro-geeks at Frosty Drew Observatory!