A Transit of Mercury Update 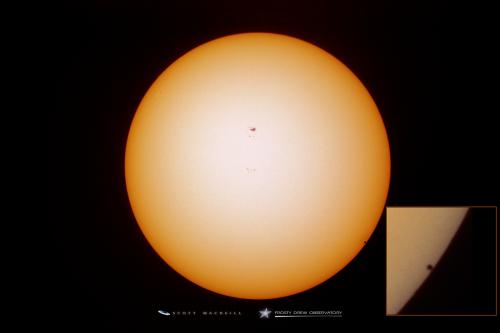 The black drop effect during the 2016 Transit of Mercury. Credit: Scott MacNeill

The second big celestial event of 2019, the first being the fabulous Total Lunar Eclipse that occurred on January 20th, is upon us! The Transit of Mercury will happen this Monday, November 11, 2019. Which is part of the 3-day weekend that starts tonight as we celebrate Veterans Day. The Transit of Mercury happens when Mercury orbits in between Earth and the Sun (inferior conjunction) as well as crosses its ascending or descending node (crosses the plane of the Solar System, or Ecliptic), in this case it is the ascending node. What all of that geek means is that Earth-bound viewers will be able to witness Mercury crossing the visible area of the Sun. At this time, weather forecasts for Monday are looking rather promising, and have improved from earlier forecasts. Since this event is happening during the late morning and early afternoon hours (EST), we should have mostly sunny skies for most of the event. The transit itself will play out over Frosty Drew Observatory, and largely New England, as follows:

These times set up Frosty Drew Observatory for a fabulous view of the entire transit event. 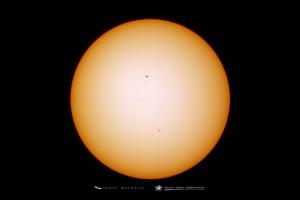 Observing the Transit of Mercury is not as easy as observing an eclipse. Mercury is quite a small planet and it is quite close to the Sun. Which will make it difficult to view without, at least, a binocular level of magnification. Considering that you will have to look directly at the Sun to see the transit event, the same dangers of looking at the Sun exist, and the same precautionary measures involved are absolutely required! Eclipse Glasses will give you a safe view of the Sun, though you may not be able to make out Mercury in the view, if so, it will be very small. You will not be able to magnify the view of Eclipse Glasses safely, so don’t even try. If you are using binoculars or a telescope to observe, be sure you are using an aperture-end solar filter (a filter that is attached to the large side of the binoculars or telescope, not over the eyepiece or ocular) that is designed and approved for direct solar observation. Additionally, the filter must firmly attach to the device to prevent wind from blowing it off. Observing the Sun without adequate filtering will result in permanent blindness! Alternatively, you could just visit Frosty Drew Observatory, where we will have a telescope setup with a Type II White Light filter, and a telescope setup with a Hydrogen Alpha filter, both available for visitors to directly observe a magnified view of the transit. We will also have solar projectors setup, which will project a magnified view of the transit onto a piece of paper. Additionally, we will have a telescope fitted with a white light filter and a camera, which will broadcast live magnified views of the transit onto screens all around our campus. This will offer you numerous safe viewing methods, as well as a day out with like minded individuals, enjoying a spectacular natural event. If you have cloudy skies, or cannot make it to an observatory and don’t want to risk your vision, there are numerous online resources available to observe the transit. Here are some:

Frosty Drew Observatory always shows the most recent view of the Sun from the Solar Dynamics Observatory.
The Virtual Telescope will broadcast live views of the transit.

Regardless of how you watch the Transit of Mercury, it is a fascinating event that only happens every so many years, with the next occurrence, visible over New England, happening in May 2049. So either throw up the transit on the corner of your screen or stop in at Frosty Drew Observatory for a fabulous daytime celebration with the Sun and Mercury.