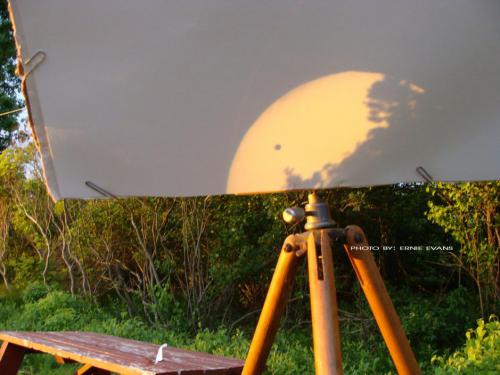 This is a shot submit by Ernie Evans of the Transit of Venus as seen in Ninigret Park. In this shot the Transit is being projected from a 4" Dynascope Newtonian telescope with a 75x eyepiece onto a white screen.

In one month from today, on Monday, November 11, 2019, Mercury will reach inferior conjunction, which is when Mercury orbits in between Earth and the Sun. Even though this happens about 4 times per year, this particular inferior conjunction is quite special. On that date, Mercury will visibly cross (transit) the surface of the Sun when viewing from almost all locations on Earth.

Observing the Transit of Mercury is not as easy as viewing most celestial events. This is mainly because of how much ultraviolet light the Sun emits, making it unsafe for direct observation. Additionally, Mercury is quite small, about 3,031 miles in diameter, and quite close to the Sun, about 36 million miles distant (around 58 million miles distant from Earth) on average, so Mercury will appear quite small as it passes in front of the Sun. This will make for difficult identification of Mercury using a camera obscura device (eclipse viewer). Even using Eclipse Glasses will make for a difficult view. The best way to observe the Transit is using a telescope or binoculars fitted with a safe solar filter attached to the aperture end of the device. Or using a telescope to project a view onto a wall or a piece of paper, like Frosty Drew Observatory Astronomer - Ernie Evans is doing here.

Frosty Drew Observatory will open on November 11, 2019 to celebrate the Transit of Mercury. Our event starts at 7:00 am and will go until 1:30 pm. We will have our hydrogen alpha telescope setup, and a telescope fitted with a Type II white light filter, both offering safe views of the transit. Additionally, we will have a third telescope setup with a camera, which will project live views of the Transit onto the 40” panel in the Observatory, the big screen in the Sky Theatre, and on screens inside the Science Center. We will have a few eclipse glasses available to assist in viewing as well as solar projectors setup on our campus.

This is the last Transit of Mercury to occur over our region until 2039, and it just so happens to fall on Veterans Day, which means schools and some workplaces have the day off. So make plans now to visit Frosty Drew Observatory on that day to catch a fabulous view of Mercury transiting the Sun, and experience one of the fabulous life-enriching events that inhabitants of Earth are granted, compliments of the cosmos.

Check out our gallery of the last Transit of Mercury over Frosty Drew Observatory.