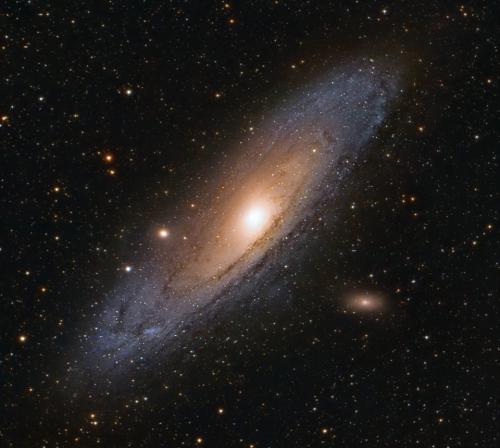 Now that autumn is upon us, that summertime view of the night sky, the one that shows off the fabulous view of the Milky Way Galactic Nucleus, is beginning to fade off into the western horizon early in the night. Though bright views of the Milky Way may be departing, we have a fantastic object that really rocks the autumn sky, coming into view, the Andromeda Galaxy (M31). Found in the constellation Andromeda, M31 is the largest galaxy in the Local Group, which is a small cluster of galaxies that the Milky Way is part of. The Andromeda Galaxy resides at near 2.54 million light years distant and is comprised of potentially 1 trillion stars. During the autumn season in the Northern Hemisphere, M31 rises well above the horizon, eventually passing zenith (top of the sky) from our location. At Frosty Drew Observatory, the super dark skies allow for a naked-eye view of the Andromeda Galaxy, once it has risen high enough off the eastern horizon. This makes the Andromeda Galaxy the furthest object we can see with the unaided eye over Frosty Drew, and the only object outside of the Milky Way galaxy that is visible to the unaided eye on site. When we observe the Andromeda Galaxy at Frosty Drew Observatory, we usually will use our smaller telescopes that are capable of wider field views. This is because the galaxy appears quite large in the sky. At 2.54 million light years distant, and about 140,000 light years in diameter, the galaxy will cover about 3° of the sky, or about 6 times the diameter of the full Moon. In the telescope, two satellite galaxies that are orbiting the Andromeda Galaxy become visible. The view is stunning and serves as a reminder of how vast the Universe really is. So stop in on a night with no Moon and make your acquaintance with the stunning Andromeda Galaxy at Frosty Drew Observatory this fall.

Over the next two weeks, evening passes of the International Space Station will continue over the US, specifically the Northeast. Though no notable passes are happening over the next several nights, a view can still be had. Be sure to visit https://frostydrew.org/observatory/#satellites for daily pass times applicable to Southern New England and generally the Northeast. For pass times specific to your location, visit NASA’s Spot the Station at: https://spotthestation.nasa.gov/.

On Saturday, October 5, 2019, International Observe the Moon Night, a world-wide celebration of the Moon, will return for it’s 9th year at Frosty Drew Observatory. This is a night where nearly all telescopes at Frosty Drew Observatory will be focused on the Moon. This year’s Moon will sport a stunning First Quarter phase, and will show many notable features such as the Lunar X, and the Lunar V, alongside Mare Tranquillitatis (Sea of Tranquility), Mare Serenitatis (Sea of Serenity), and dozens of craters. This is a special night at Frosty Drew Observatory, a night where we make amends with the Moon for all the complaining we do every year about how bright it is. Our event starts at 6:00 pm and goes until 11:00 pm. Alongside our telescopes, we will also host NASA Solar System Ambassador – Frank Puglia, who will present about the Moon. We’ll setup the Lunar Lounge, which projects a large live view of the Moon on the exterior wall of the Sky Theatre building. In the Science Center we will have a 12 foot wide panoramic of the Apollo 11 landing site photographed by the NASA Lunar Reconnaissance Orbiter (LRO) on display. On screens around the campus we will show special images and videos about the Moon. Whether you’re a lunar geek or not, this is totally a night to be out, so put the date on your calendar and join in the world-wide celebration as we geek out with the Moon. Visit our event page for more information.