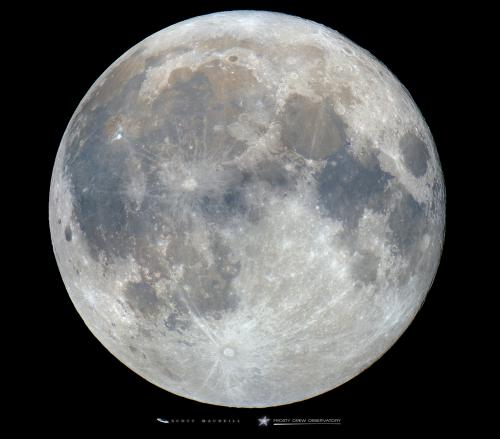 Tonight’s Full Moon, which occurs at 12:33 am ET, is the closest Full Moon to the Autumnal Equinox, which occurs at 3:50 am ET on Monday, September 23, 2019. That makes tonight’s Full Moon, the annual Harvest Moon. Though the September Full Moon is actual called the Full Corn Moon, the closest Full Moon to the Autumnal Equinox is considered the Harvest Moon. At 9:33 am ET this morning, the monthly lunar apogee occurred. This is the furthest point that the Moon will reach in it’s 27.3 day orbit around Earth. That makes tonight’s Full Moon a micro-moon or mini-moon. The Harvest Moon is a well known harbinger of autumn in the Northern Hemisphere, it’s name likely comes from farmers using the light of the September / October Full Moon to aid in the harvest, that is, before headlights fixed that problem. Over the years, the mysticism of the Harvest Moon has grown quite abundantly, with stories and pictures of a massively large Moon hovering overhead, which elicits not-so-trustworthy memories of seeing such a Full Moon. Though in reality the Harvest Moon is no bigger, redder, or brighter than any other Full Moon, aside from changes related to orbital distance, and particles in Earth’s atmosphere. Considering that tonight’s Harvest Moon is also the mini-moon, it will technically be one of the dimmer Full Moons of the year. Regardless, it will be a fabulous night of cool, autumn-like temperatures to be out under the bright Full Moon. If it isn’t already, make a night with the Harvest Moon one of your festive autumn activities and kick-start your leaf-peeping, creep-tastic autumn celebrations tonight. 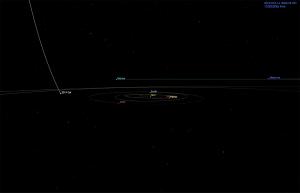 On August 30, 2019, Ukrainian astronomer, Gennady Borisov discovered a new comet. Designated C/2019 Q4 Borisov, the comet may be quite unique. Comet discoveries, in general, are not uncommon, with some of the best comets being newly discovered, and unexpected comets. What makes this discovery so unique and interesting, is that Comet Q4 Borisov may not be a Solar System comet, and is quite possibly an interstellar visitor to the Solar System. To date, we have had only one interstellar visitor to the Solar System, which was the small asteroid / comet, 1I/2017 U1 Oumuamua that passed the Sun on September 9, 2017. Comet Borisov is scheduled to make its closest approach to the Sun (perihelion) on December 8, 2019. Though its perihelion is not all that close, with the comet staying outside of the orbit of Mars. The closest the comet will get to Earth is about 190 million miles distant. So any news you hear about impact threats to Earth, are just doomsayer nonsense. At this time, the comet is about 260 million miles from the Sun, and only visible in very large telescopes. The high velocity of the comet is one of the indicators that this object is interstellar. Traveling at around 93,000 mph, the comet is moving much faster than typical Solar System objects, fast enough to eject the Solar System after perihelion. The comet’s angle of approach is inclined 40° to the plane of the Solar System, and perihelion will occur on the opposite side of the Sun than Earth. This will make for poor viewing potential of the comet considering it will appear quite close to the Sun from our vantage point. Regardless, Comet C/2019 Q4 Borisov will certainly frequent headlines over the next few months as it closes in on perihelion and we learn more about the comet, including the size of the comet, rate of rotation, and if it is actually an interstellar visitor.

Save the Dates:
Here are a few happenings at Frosty Drew Observatory to geek out your autumn. Add them to your calendar, so you don’t miss out.

Monday, November 11, 2019 will bring the Transit of Mercury to the sky and Frosty Drew Observatory will open for the day, in sunlight, to observe the fabulous event.