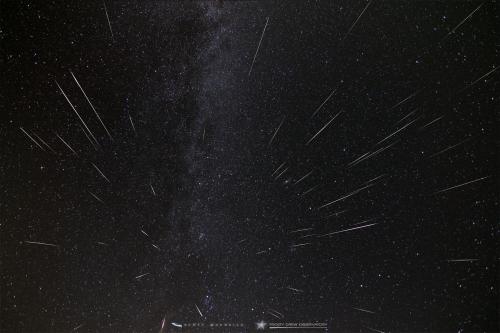 The annual Perseid Meteor Shower peak will be blazing the skies overnight August 12-13, 2019. Though meteors will be visible, do not expect the 100+ meteors per hour that the shower usually brings. This is because the bright 93% waxing gibbous Moon will be with us for nearly the entire night, and will outshine all but the brightest meteors. The Perseids are one of the most notable meteor showers of the year, which is the result of Earth passing through a debris field left behind by comet 109P/Swift-Tuttle. Discovered in 1862 by Lewis Swift and Horace Tuttle, comet 109P was identified as the source of the Perseid shower in 1865. The comet has a 133 year orbit around the Sun and made its last visit to the inner solar system in 1992. Meteor showers are named after the constellation that their meteors appear to radiate from. This is called the "radiant point". The Perseid shower radiates from the constellation Perseus, visibly about half way between the constellations Perseus and Cassiopeia near the naked-eye-visible Perseus Double Cluster. Since Perseus will rise around sunset, the radiant point will be about 37º above the horizon at 1:00 a.m. during the peak night of August 12-13th and rising higher over the course of the night, eventually passing overhead. This places the radiant point at an excellent place for viewing. Now Frosty Drew Observatory is not hosting an official event this year for the Perseid Meteor Shower, though if skies are clear, Frosty Drew Astronomers will be at the observatory to observe the meteor shower and will welcome visitors who wish to observe with us. Considering that the Perseid shower brings numerous fireball meteors, it is still worth checking out. If setting out to watch the meteor shower, head to a location with a wide open view of the sky. A super dark location is not necessary this year due to the Moon. Lay on your back and look to the zenith (top of the sky). If possible, orientate yourself in a way that the bright Moon is blocked from your face to avoid the glare of the Moon. A reasonable expectation of meteor activity is an increase of about 10 meteors per hour. It’s been years since we have had clear skies for the Perseids, let’s see if we can score some this year.

On June 27, 2019, the Hubble Space Telescope (HST) took some time out to focus on Jupiter. Notably, Jupiter’s Great Red Spot, which has been shrinking for some time now. Currently, we are unsure of the Red Spot’s fate, though it has been shrinking for over 50 years, consecutively. Jupiter, which was at opposition on June 10, 2019, is still offering up beautiful viewing. Check out the photo of Jupiter that HST captured. Then head over to Frosty Drew Observatory tonight and see Jupiter and the Great Red Spot for yourself!

Tonight, Friday, August 9, 2019, is the first night of a conjunction involving Jupiter, the waxing gibbous Moon, and Saturn. Conjunctions are events in the sky that happen from a visual perspective, though most of the time have no cosmic significance. Starting tonight, the Moon will appear within 1.5° of Jupiter, visibly passing over the bright planet. Tomorrow night (Saturday, August 10, 2019), the waxing gibbous Moon will arrive in between Jupiter and Saturn in the sky. Then on Sunday night (August 11, 2019), the waxing gibbous Moon arrives near Saturn, sitting about 5° to the west of the ringed planet. With clear(er) skies forecast for all three nights over Southern New England, this is an easy geek out. Step outside after twilight ends over the next three nights and look for the Moon, then note the planets around it. Jupiter is brighter than Saturn in the sky and is currently in the constellation Ophiuchus, the snake holder. Saturn is in the constellation Sagittarius, the archer (or teapot for the modern viewer). If you snap a pic of the conjunction post it on our Facebook and we’ll share it on our time line. Happy viewing!