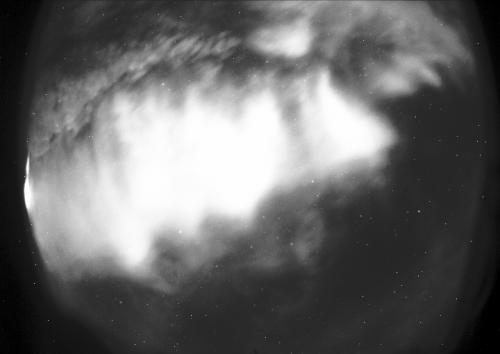 Here is a photo of the fireball meteor that was spotted over the Northeast US and Canada on Wednesday, July 24, 2019 at 11:03 pm EDT. This photo was captured by the all-sky camera at Brown University's Ladd Observatory, compliments of Mike Umbricht.

This past Wednesday night (July 24, 2019) at 11:03 pm a fabulous fireball meteor was visible in the southern sky, heading from the southeast → northwest. The fireball was spotted by hundreds of people in the Northeast US and Canada, including Frosty Drew Observatory, by Frosty Drew team member – Jessica. Check out this video of the fireball from Boston, MA. A fireball meteor is a brighter than average shooting star that lasts longer as it crosses the sky. A bolide is a fireball meteor that fragments and/or explodes. These meteors are often small Near Earth Asteroids (NEA) that enter Earth’s atmosphere, burn up and explode. Sometime they are just larger meteors, pebble to basketball sized fragments of a comet that regularly passes through this part of the Solar System and leaves a debris field behind. At this time, we are unsure of the source of Wednesday's fireball meteor, though it was not part of the annual Perseid Meteor Shower, which started on July 17th and is currently underway. It may have been part of the Delta Aquariid, Alpha Capricornid, or June Scutid showers; all of which are also underway. Regardless of the source, fireball meteors happen all the time, with Earth encountering upwards of 100 tons of meteor material per day. So keep looking up, you never know when you will see a fabulous, exploding bolide fireball meteor. If you happen to catch a photo of a meteor; fireball or otherwise, be sure to post it on our Facebook and we’ll share it to our time line.

Though tonight’s weather is not looking as promising as we originally hoped for. Tomorrow night, Saturday, July 27, 2019, looks fabulous. As it would happen, tomorrow night is, what the Frosty Drew astronomers think, the best Saturday in July to see the Milky Way over Frosty Drew Observatory. So we are hosting our Celebrate the Milky Way event, a special event with the goal of introducing fabulous views of the Milky Way to you. We open at 9:00 pm and will go until near midnight, possibly later. The Milky Way will become strikingly visible once astronomical twilight ends, at 10:07 pm. In our telescopes, we will showcase dozens of fabulous objects visible along the Milky Way galactic plane, objects that are only visible on the darkest nights, including the nebulae and star clusters of the constellation Sagittarius, the fabulous Wild Duck Open Star Cluster in Scutum, and numerous stars that have died and are transitioning into white dwarf stars. This is a night of deep space viewing, with the planets on hold until next week. If viewing the Milky Way is on your bucket list, then tomorrow night is the night to check it off. So stop in and set your inner geek lose under the darkest skies in RI at Frosty Drew Observatory.

This past week, questions about the 2019 Perseid Meteor Shower have started to pour in. As usual, the annual Perseid shower is a hot topic in the media, and rightfully so, it’s one of the three best meteor showers of the year. Sadly in 2019, the peak night of the Perseid shower (Monday, August 12-13) will be accompanied by the 93% waxing gibbous Moon, which will be up for nearly the entire period of meteor activity. The excessively bright moonlight will obscure all but the brightest Perseid meteors. This will not render the shower a complete loss, but will not offer the stunning view that the Perseid shower is known for. At Frosty Drew Observatory, we are still undecided if we should open for the event. If you think we should go for it in spite of the Moon, respond to this email, send an email to astronomer@frostydrew.org, or post on our Facebook to let us know what you think.