This past Tuesday, July 9, 2019, the Sun, Earth, and Saturn aligned, with Saturn being placed on the opposite side of Earth than the Sun. This is called the Opposition of Saturn, and places us in the best time to catch a view of Saturn. Now that opposition has passed, views of Saturn will rock socks for the next month. Observing Saturn through a telescope will reveal the fabulous system of rings as well as upwards of 6 moons, depending on the size of the telescope. Additionally, Saturn will rise before sunset each night, consecutively rising higher every night, optimally placing Saturn for viewing in the earlier hours, which is more accessible for the younger of us with bed times. Considering Saturn is so bright, like Jupiter, heavy haze or thin cloud cover will actually make for better viewing conditions, which in Southern New England, seriously increases the likelihood of catching a view. So put Saturn on your calendar and stop in at Frosty Drew Observatory on either Wednesdays or Fridays to sneak a peek.

On Sunday, July 14, 2019, the International Space Station (ISS) will return to the night sky, with nightly passes over the US. Since we are still quite close to the Summer Solstice, numerous passes will be visible each night, with a few nights offering up passes every 90 minutes (ISS orbital period). Here are a few notable passes for this week:

The times listed above are the best times during the earlier night hours and are applicable to Southern New England, but will generally be acceptable for the entire Northeast. For all pass times over this region, visit our homepage daily. For pass times specific to your location, visit NASAs Spot the Station. Now get out and show off your space prowess to your friends and family by wooing them with a fantastic pass of the ISS. 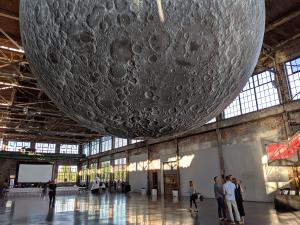 On Monday, June 8, 2019, the Museum of the Moon exhibit at the WaterFire Arts Center in Providence, RI kicked off. The exhibit has a 23’ diameter replica of the Moon hanging in the old warehouse, using imagery captured by the NASA Lunar Reconnaissance Orbiter (LRO). Over the next month lectures and events will be happening under the Moon almost every night. This is a free exhibit for all, so you have no reason to miss out. Check out the frequently updated calendar of events under the Moon, then add the Museum of the Moon to your list of Apollo 11 50th anniversary festivities.