Tonight, Friday, August 21, 2020 is the 500th event we have held at Frosty Drew Observatory since we modernized our public outreach operations in 2012. Frosty Drew Memorial Fund, Inc., which is the parent organization that oversees the Frosty Drew Observatory and Science Center, was organized in 1983, with the Nature Center facility opened on July 3, 1983. The Observatory facility was added in 1988, the Sky Theatre facility being added in 2010, and the Science Center facility being added in 2018. Over the years Frosty Drew has seen many big changes, including the direction of the organization as well as the mission. Though our primary mission has always been public outreach – connecting you with nature, the planet, and the cosmos.

In the early 2010’s we realized that Frosty Drew needed a serious upgrade in regards to the state of our technology and how we were utilizing advances in technology to facilitate our public outreach efforts. At that time we introduced a significant Frosty Drew presence online. It took a couple of years to accomplish and it is an ever evolving project. Though 2012 was the year that we were fully integrated, and our plans to become compliant, and proficiently utilizing recent and new technologies became our reality. 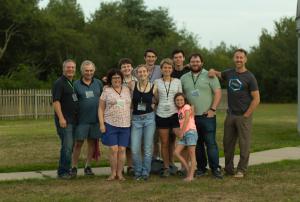 This change enabled us to reach thousands of individuals that did not realize views of the Milky Way were so easily attainable in Southern New England. It also enabled us to get the word on the street that ANYBODY can be an astrophysicist, theoretical cosmologist, planetary geologist, etc. That science was not for the gifted, wealthy, or those in obscure corners of geekdom. That anybody who truly wanted it could have it! That anyone between the age of 5 and 21 has a REAL CHANCE to stand on the surface of Mars. Sharing the reality with today’s children that they are part of a generation of humans that include the first humans to set foot on another planet. Introducing the reality that every one of them has that opportunity.

At Frosty Drew we believe that we are never where we need to be, and that change is good. Though we hit 500 public events since May 2012 with tonight’s event, we have big changes in the works, with several new additions on the horizon. Changes that will continue to bring mind blowing views of the cosmos to you, as well as continuing our mission to Enlighten, discover, inspire- through education and research- knowledge about science, the night sky, and the universe. So here’s to the next 500!

This past week, Mars has become brighter than the brightest star in Earth’s nighttime sky, Sirius. As Earth continues to approach Mars for the October 13, 2020 opposition (when Mars is on the opposite side of Earth than the Sun), Mars will grow increasingly bright, eventually outshining everything aside from the Sun, Moon, and Venus. Mars has also started to rise before midnight, with rise times tonight (August 21, 2020) being at 10:00 pm sharp. At Frosty Drew Observatory we have started to make regular observations of the red planet, and have easily noticed the southern polar ice cap on Mars being very visible. As Earth gets closer to Mars more and more features will start to become visible including clouds around Olympus Mons and Elysium Mons, Valles Marineris – a canyon that stretches the equivalent distance of Los Angeles to New York City, Syrtis Major, Hellas Basin, and much more. Best views usually kick in during the two months that surround the opposition date. That places us at the start of that period right now. Keep an eye on the sky over the next few months and note the bright red planet in the sky and how bright it will become once October hits. During this time, be sure to stop in at Frosty Drew Observatory and see Mars for yourself!