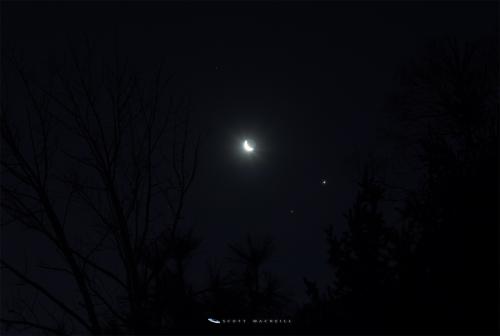 Mars, Jupiter, and the Moon in conjunction. Credit: Scott MacNeill

Step outside tonight, Friday, August 28, 2020 to catch Saturn, Jupiter, and the waxing gibbous Moon in conjunction. The Moon will be situated about 1.75° below Jupiter, with Saturn hanging out about 7° to the east, forming a thin triangle in the sky. With Saturn and Jupiter spending the year in close visual proximity to each other, we are having quite a year of conjunctions. If you miss out tonight, second chances rock as tomorrow night the brighter waxing gibbous Moon will be just below and east of Saturn. So step outside either tonight or tomorrow and enjoy the celestial dance of Jupiter, Saturn, and the gibbous Moon, compliments of the cosmos.

Another common misconception associated with the Harvest Moon is that it will be the brightest and largest of all full lunar phases of the year. The only time this is technically accurate is during the yearly lunar perigee syzygy (Supermoon), when the Moon is the closest to Earth of all other full lunar phases of the year. Even then, it’s not so much visible as it is measurable. In 2020 the Harvest Moon is certainly not a perigee syzygy. The reason why people associate the Harvest Moon with the brightest, largest Moon of the year is more of meme evolution than anything else. The event is over-hyped by the media and is traditionally associated with harvesting by moonlight. This had led to the misconception that the Moon is somehow brighter and larger than all other Full Moons. Regardless of what we say, we always have visitors that point out to us that the Harvest Moon indisputably IS the brightest and largest Full Moon they have ever seen. A true testament to the power of meme evolution. In any case, it is a good reason to step outside and enjoy the cool autumn air and ponder the cosmos. 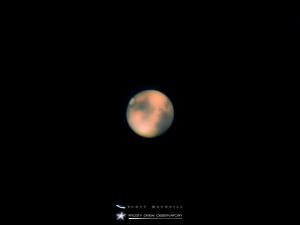 Now that the close of summer is upon us, Mars – the red planet, is growing brighter with each passing night. Now rising within two hours after sunset, Mars is resuming its role as that bi-yearly red beacon in the night sky. Considering that Mars has a 687 Earth-day orbit around the Sun, compared to Earth’s 365 day orbit, we see Mars every 2 years in the night sky. Since Earth will be passing Mars on October 13, 2020 (opposition), we will be observing Mars during the winter season on Mars’ northern hemisphere. Now Mars has a problem with sandstorms, which are very prevalent during perihelion (Mars’ closest approach to the Sun). If opposition occurs during perihelion, the chances of having a global sandstorm obscure our view of Mars’ surface is a bit high, which happened two years ago. This year, Mars’ perihelion happened on August 3, 2020, and no serious sandstorms have occurred yet. This bodes well for Mars observers over the next two months, since surface features on Mars are quite visible in a telescope around the period of opposition, unless obscured by sandstorms. We have already begun observing Mars for the 2020 viewing season at Frosty Drew Observatory and are hopeful for many fantastic views as we move through autumn. So stop in and see Mars’ dramatic landscape for yourself.