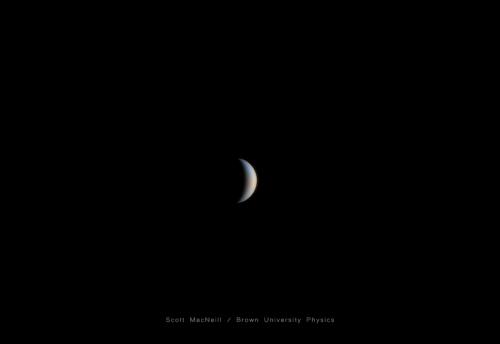 On Saturday, September 5, 2020, Mars and the waning gibbous Moon will put on a fabulous celestial dance for Earth-bound sky watchers, as the Moon visibly passes within 0.5° of the red planet. Since the Moon orbits Earth inclined 5.1° to the ecliptic (the path the Sun takes across the sky, and the plane of the Solar System), we often see the Moon visibly pass closely to planets, and any stars that are along the ecliptic. Now that Mars is rapidly approaching opposition, which is when Earth will pass Mars in our orbits, placing Mars on the opposite side of Earth than the Sun, we are starting to see the red planet slightly brighter with each passing day, as well as observing Mars above the horizon a little longer each night. What better way to celebrate a fabulous autumn with Mars, than with a beautiful conjunction of Earth’s only natural satellite (the Moon), and the red planet. So step outside Saturday night, around 11:00 pm, look to the SE and catch the Moon about 0.5° below Mars, the best time to view will be between midnight and 1:00 am, and add the stars to your Labor Day weekend festivities.

With Venus well past Maximum Western Elongation, which occurred on August 12, 2020, Venus is still very visible in the morning sky. This is because the ecliptic becomes quite inclined in the eastern sky during the morning hours, as we approach the Autumnal Equinox (September 22, 2020). Right now, Venus is dimming, but it is still quite bright. Take a moment this weekend to step outside about an hour before sunrise, and take a look towards the east for a super bright star-like object in the sky. That’s Venus. If you have a telescope, you will notice that Venus is now well into its waxing gibbous phase. This is because Venus is orbiting away from us as it completes its orbit around the Sun. Eventually, Venus will arrive on the other side of the Sun than Earth, called Superior Conjunction. But that will not occur until March 26, 2021. Though we will have Venus in the morning sky through the winter season in the Northern Hemisphere, this weekend presents a fabulous opportunity for a view. So step out for an early morning (or late night) moment with the hellish planet. While you are outside, take a look towards the southwest and spot Mars, shining like a bright red beacon.

Have a Happy Labor Day from all the astro-geeks at Frosty Drew Observatory!