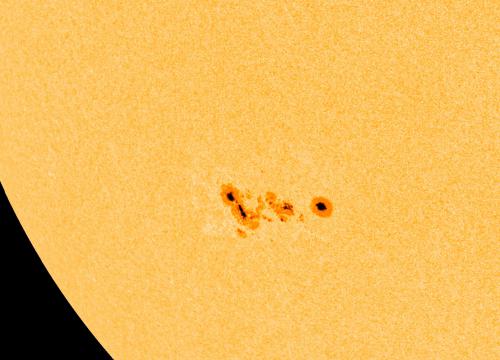 Starting one year ago, during December 2019, Solar Sunspot Cycle 25 started. The new cycle always starts during Solar Minimum, which is a period of practically no sunspot activity on the solar photosphere (surface of the Sun). Last month it was declared that solar minimum was officially over, as we are starting to see a rather fast increase in sunspot activity on the Sun. So what is the Solar Sunspot Cycle?

The cycle is an 11 year period of increasing and decreasing sunspot activity on the photosphere. Starting with solar minimum, the cycle will quickly increase to solar maximum, which is when the Sun is most active. Solar maximum happens about 5-6 years after the cycle begins. Over the following 5-6 years, the Sun will slowly decrease in sunspot activity, and drop back into solar minimum. A sunspot is the product of energy rising from the core of the Sun, which is then released at the photosphere. The particles that carry solar energy, called Granules, are dipolar, meaning they have a north and south magnetic polarity. Sometimes these granules will magnetically connect with other granules that rise nearby, and form a magnetic field over the region. This magnetic field will reduce the amount of radiation that enters the region from the surrounding photosphere, and allow the protected region to cool. The cooling will darken the region. This is a sunspot. 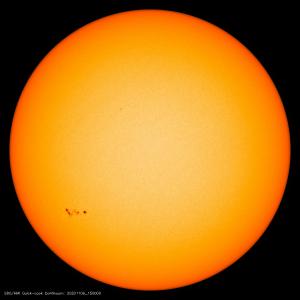 These past couple of weeks have brought several sunspots in a couple of fabulous sunspot groups. Though this past week, a huge sunspot group, AR 2781, rotated into the side of the Sun that faces Earth. This sunspot group has continued to grow and is exceedingly large, with a diameter larger than Jupiter. Over the next several days, the AR 2781 group will move into an Earth facing orientation, which means that any Coronal Mass Ejection (CME) flare activity produced by this group, will be directed towards Earth. Depending on the size of the flare, this could bring the fabled Northern Lights as far south as Northern Rhode Island. Check out this sunspot as of this morning, and get excited because solar maximum is on the way, and we are in for several years of sunspots, solar flares, and the Aurora Borealis!

Of all the things we can attribute to 2020, not too many of these things are good. Though among it all, one thing is certain. It has been a fabulous year of comets in the Northern Hemisphere! With so many potentially awesome comets passing by, culminating with the stunning Comet C/2020 F3 NEOWISE this past summer, this year will not be forgotten. Though the comet awesomeness of 2020 is not quite ready to step aside. A recently discovered long period comet (a comet with an orbital period around the Sun of over 200 years), is poised to offer excellent binocular views through the end of November and into December, and perhaps a lucky outburst will bring it to naked eye visibility (like comet NEOWISE did) . The comet is Comet C/2020 S3 Erasmus, which will make a rather close approach to the Sun (perihelion) on December 13, 2020 at a mere distance of 38,214,851 miles from the Sun, with a close pass of Earth happening on November 19, 2020 at a distance of 96,965,700 million miles. Sorry doomsayers, no doomsday happening here. All of this sets us up for potentially excellent views of Comet S3 in the morning hours starting on November 13, 2020. So how do you view the comet?

Starting November 13, 2020, set out to a dark location largely free of artificial light. Bring binoculars or a telescope with you, and be at that spot starting at 5:00 am. The comet can be seen facing the SE, about 17° above the horizon on the edge of the constellations Crater and Corvus. This process can be completed every morning until November 20, 2020, with the comet descending towards the horizon by about a degree per night. So grab your binoculars and telescopes and get out to see yet another comet of 2020 and welcome the Holiday season with the festive green hues of Comet S3 Erasmus.

This past Saturday, October 31, 2020 (Halloween), there were several astronomical events occurring including a Cross-Quarter Day, Full Moon, and the Blue Moon. Additionally, Uranus – the seventh planet from the Sun, was at opposition that night. This happens every year, and is a product of Earth’s orbit around the Sun. On Saturday, Earth arrived at the point in our orbit where Uranus was on the opposite side of Earth than the Sun. Not only does this signal our closest approach to Uranus for our year, at a distance of 1.7 billion miles, it also puts Uranus into a period of best viewing. So stop in and see Uranus for yourself, and see if you can spot its pale blue color.

This coming Wednesday, November 11, 2020, the annual North Taurid Meteor Shower will peak. Bringing an increase in regular meteor activity by about 5 meteors per hour, the shower is not the banger that the Geminids or the Perseids put on. What is notable about this shower is the significant number of fireball meteors that come with it. A fireball meteor is a brighter than average meteor, that is longer lasting, and can fragment as it passes. The Taurid shower is probably the largest producer of fireball meteors of all meteor showers. Overnight Nov 11-12, we will have a rather slender 17% waning crescent Moon that doesn’t rise until 1:46 am, leaving dark sky conditions to observe under. So take a moment to step out, lay on your back, and see if you can spot a fireball meteor compliments of the Taurids