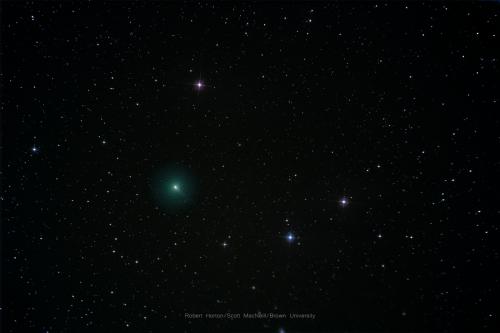 Over the past several nights, Comet C/2020 M3 ATLAS has been showing off fantastic views as it passes through the constellation Orion. The comet is currently visible in small backyard telescopes, and possibly binoculars when viewing under dark sky conditions. A periodic comet, M3 has an orbital period of 139 years, and reached perihelion – its closest point to the Sun, on October 25, 2020. Now that the comet is making its way back out of the inner Solar System, it will make a quick pass by Earth tomorrow, Saturday, November 14, 2020, at a distance of 33,315,509 miles. Something to remember about comets and their tails. A comet’s tail is a product of volatile materials on the comet’s nucleus heating up and out-gassing as the comet encounters the solar wind (constant outflow of magnetism and radiation from the Sun). This means that a comet’s tail will always be on the opposite side of the comet than the Sun. Considering that Comet ATLAS is on the opposite side of Earth than the Sun, and was pretty much in this placement during perihelion, the tail is on the opposite side of the comet than Earth, so we will not see a fabulous tail like we did this past summer with Comet F3 NEOWISE. Instead the comet will appear as a large green blob to a camera, visibly as a grey blob with a bright center. Remember Comet 46P/Wirtanen in December 2018? That’s similar to how this comet will appear. Regardless, it’s worth getting out for a view. Tomorrow night, Saturday, November 14, 2020, the comet will be sitting about 0.5° below the bright star Bellatrix in the constellation Orion, making it easy to find. Over the next several nights, Comet ATLAS will continue to move about 1° per night in a NNW direction.

As if one comet is not enough, we have another comet blazing the sky as well. Comet C/2020 S3 Erasmus, has been putting on a show for early morning comet watchers. At this time, Comet Erasmus has a lot of expectations of becoming a rather good comet. Though predicting comet brightness and activity is difficult. What we do know, is that Comet Erasmus, a long period comet with an orbital period of 124,333 years, will make its closest approach to Earth this Thursday, November 19, 2020 at a distance of 96,965,700 miles. After which, Comet Erasmus will reach perihelion on December 13, 2020 at a rather close distance of 38,214,850 from the Sun. Being that Erasmus will reach perihelion on the opposite side of the Sun than Earth, we are set up for potentially good views of any tail that forms. Though the viewing angle of Erasmus is tough, placing best times for viewing right now! The comet is in the morning sky, just before sunrise, hanging around the constellation Corvus. At this time, reports of the comet’s brightness are coming in at Magnitude 7.2, which is binocular visible. Overnight tonight could work out if fog moves out by 5:00 am. Otherwise Sunday morning is looking fabulous! To catch a view, set out to a dark location, largely free of light pollution with a good view over the SE horizon, and be there for 5:00 am. Comet Erasmus will be about 1.5° WNW (top right) of Gienah, the second brightest star in Corvus. Let us know if you see it!

Overnight this coming Monday, November 16-17, 2020, the annual Leonid Meteor Shower will peak. Bringing with it an increase in regular meteor activity by about 15 meteors per hour. The Leonid shower, resulting from Comet 55P/Tempel-Tuttle, has a very big reputation, with a rather small showing. The Leonids are remembered as the shower that brought thousands of meteors per hour to the night sky in November 2001. This happened because of a 30 year cycle of outburst activity that the Leonids produce. Though outside of that cycle, the shower is pretty much a dud. The best part of the annual Leonid shower are fireball meteors that are part of the Taurid Meteor Shower. Now if you are a meteor watching purist, the Leonid shower is considered one of the primary meteor showers of the year, and in 2020 the 3% waxing crescent Moon will set at 5:45 pm, making for excellent viewing conditions all night long. The radiant point of the Leonid shower, which is where all meteors appear to originate from, is just NW of the bright star Algieba in the constellation Leo. Considering that Leo will not rise until near 11:00 pm, the best time for meteor watching will be in the morning hours between 3:00 am and pre-dawn. To catch a view of the shower, set out to a location with a dark sky, largely free of artificial light. Lay on your back with your feet orientated to the SE, and look to the zenith (top of the sky), to catch sight of shooting stars streaking the sky.

This coming Wednesday, November 18, 2020, the International Space Station (ISS) will commence evening passes over the US, specifically the Northeast. Now that we are just over a month away from the Winter Solstice, evening passes of the ISS are early enough for the whole family to enjoy. Here are a couple notable passes for this week:

Note that these pass times are applicable to Southern New England, and generally acceptable for the entire Northeast. For pass times specific to your location, visit NASAs Spot the Station. Evening passes of the ISS will continue over our region every night through December 12, 2020. So add the ISS to your daily holiday season festivities and remind yourself of the amazing things that humanity is capable of in the face of the unknown when we de-prioritize our fear.