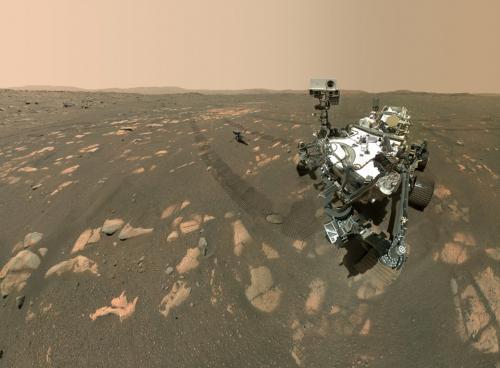 NASA Perseverance Rover and the Ingenuity rotorcraft pose for a selfie on Mars.

This past week, during a high-speed spin test of the Ingenuity Mars helicopter, which accompanied the Perseverance Rover to Mars, experienced an unexpected shutdown due to a fail safe mechanism designed to detect issues and shutdown related processes to prevent further damage. The problem happened when Ingenuity was transitioning its flight computer from pre-flight mode to flight mode. The issue appears to be software related and the Ingenuity team has made a small change in the flight control software that should allow for safe transitioning into flight mode. This change is a small edit, but will require a re-installation of Ingenuity’s flight control software, which will take some time. A test flight date has still not been set and the re-installation of the flight computer will take several sols (days on Mars). It’s important to note that although this sounds quite dramatic, these types of issues are common when introducing new tech. The worst part of all this is the waiting game. Everyone wants to see this chic fly! 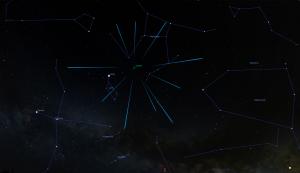 This coming Thursday morning, April 22, 2021 the annual Lyrid Meteor Shower will peak. Bringing with it an increase in regular meteor activity by about 18 meteors per hour, the Lyrids are not very active. But with that said, myself and Frosty Drew Astronomy Team member James Crouch were out for the Lyrid peak last year (2020) and were quite blown away at how active the shower was. Regardless of activity, this shower ends the long 3.5 month lull in meteor activity. The Lyrids get their name from the spot in the sky that meteors appear to radiate from (radiant point), the constellation Lyra, specifically about 8° west of the bright star Vega. Though in modern times, this is not actually the constellation Lyra, but the constellation Hercules. Meteor shower naming predates the International Astronomy Union’s (IAU) establishment of official constellation boundaries, so the shower retains its name. Best times to observe the Lyrids (or any meteor shower for that matter) is when the radiant point of the shower is well above the horizon, while the Moon is not out. The higher the radiant point is in the sky, the more meteors you will spot. At midnight, the radiant point will be about 34° over the eastern horizon, making best times to observe during the morning hours until pre-dawn. Considering the 75% waxing gibbous Moon will be with us most of the night, setting at 3:51 am, viewing times are short, but during the best times! All we need now is a clear sky, which at this time looks to be the case. 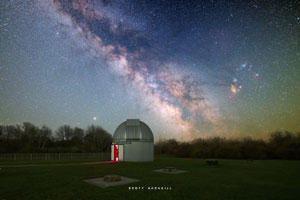 To observe, set out to a dark location largely free of artificial light and be on site for 3:50 am, lay on your back so you are looking to the zenith (top of the sky) with your feet pointed south. Meteors will be visible as very fast streaks of light across the sky (shooting stars). The best thing about the Lyrid shower is that during the morning hours the Milky Way galactic nucleus will rise quite high in the sky, with the Milky Way galaxy stretching across the sky nearly overhead. This will give you an opportunity to catch a beautiful sight of the Milky Way during the best viewing season! So put the 22nd on your calendar and set out with your family for a beautiful early morning to welcome both Milky Way viewing season and meteor viewing season for 2021, under the stars. Note that although Frosty Drew Observatory will not be hosting an event for the 2021 Lyrids, several of our astronomers will likely be on site to observe and catalog the event. 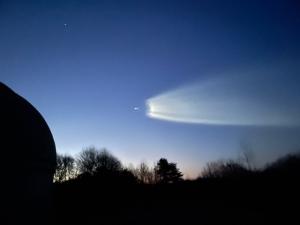 This coming Thursday, April 22, 2021 at 6:11 am, the SpaceX Falcon 9 rocket will launch from Kennedy Space Center. This launch will shuttle the International Space Station (ISS) Expedition 65 astronauts to the station. This launch event will be broadcast live on NASA TV (https://www.nasa.gov/nasalive). At this time, we do not know the telemetry of the launch vehicle, though we have had some SpaceX Falcon 9 launches become strikingly visible in the morning sky over Southern New England and the Northeast this year. The launch time puts the launch a little bit behind sunrise, which may put a damper on some of the viewing prospects this far north, but it’s worth a try. Add in that this is just after the peak period of the Lyrid Meteor Shower, and what appears to be in the middle of the best weather for the entire week over our region. We will post additional updates on our Twitter (@FrostyDrewOBSY) and Facebook this week as we learn more about the launch.