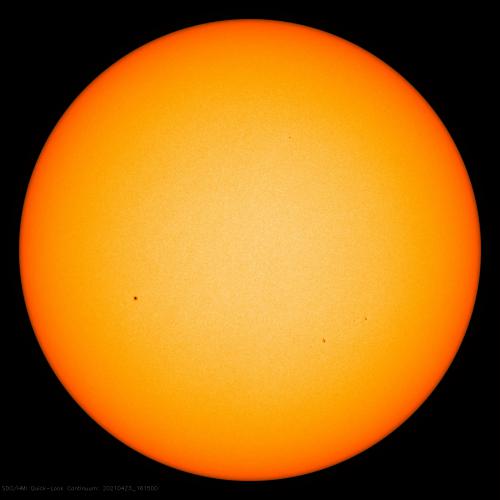 Cycle 25 is starting to get underway with Solar Minimum fading out. Image Credit: NASA SDO

This past Thursday, April 22, 2021, the Earth-facing sunspot group – AR2816, erupted in a spectacular C-Class solar flare, spewing a coronal mass ejection (CME) towards Earth. Just to be clear, a C-Class flare is not massively significant and doesn't mean that we will be throwing up our hands under a fabulous light show of the Aurora Borealis in Southern New England. What it does mean is that the Sun is waking up, and the new solar sunspot cycle (Cycle 25) is rapidly increasing from the long solar minimum we have been experiencing.

The solar sunspot cycle is an 11 year cycle with a maximum and minimum period in sunspot activity. On the maximum side, we see sunspots form and transit the solar photosphere (surface of the Sun) almost all the time, with C-Class flares happening on a regular basis. Occasionally M-Class and X-Class flares happen during solar maximum, which can bring the fabled Northern Lights to Southern Rhode Island. During the minimum side of the cycle, sunspots become rather rare with the occasional lone sunspot sitting on the solar photosphere. Solar flaring is practically non-existent during solar minimum. When analyzing trends of previous solar sunspot cycles, we can easily see that the maximum period kicks in quite quickly after departing minimum, and will slowly wane back to minimum over the following 8-9 years. Cycle 25, the current sunspot cycle, started in December 2019. 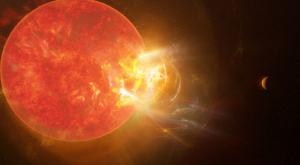 Keep in mind that the Sun is not a flare star, and is extremely stable. Although very strong solar flaring can occur, we will not be bombarded with an Earth-encompassing solar flare that will wipe out our existence. Which is quite on the contrary to what many doomsayers would have you think. So enjoy the hype over the next few days and take a moment to check out the solar photosphere and the nice arrangement of sunspots that are currently active. But note that we will not see the Northern Lights this week over Rhode Island and will likely never see them over Rhode Island the way they are visible over the Arctic.

On May 2, 2021, Jupiter will reach the point in its 12 year orbit around the Sun where it will be tilted neither towards or away from the Sun, this is the Vernal Equinox on Jupiter and will mark the first day of spring on Jupiter's northern hemisphere. This sounds great and all, but what does this mean for us here on Earth?

When we observe Jupiter in telescopes, we get fantastic views of the gas giant's weather patterns and storms, but we also get a stunning view of the four Galilean Moons, which are among the six largest moons in the Solar System. Being that Jupiter has a 3° tilt on its axis, depending on where Jupiter is in its orbit, related to our viewing point, we see Jupiter's moons inclined up-to 3° to our viewing plane. But the months near Jupiter’s equinoxes will bring our view of the moons inline with our viewing plane, causing the Galilean Moons to eclipse each other from our point of view. We call this “mutual events”, which is anything from an eclipse of two Galilean Moons, to occultations of Galilean Moons (when one passes in front of the other and overtakes it from our view). To observe some of these mutual events, you need a relatively large telescope, like the one we have, and the bigger one we are adding to Frosty Drew Observatory this year. Though occultations are visible using a backyard telescope.

Currently Jupiter is rising in the early morning sky just before 2:00 am. With the rise time becoming earlier with each passing day. Considering that we are in the best Milky Way viewing season at Frosty Drew, which happens in the early morning hours, Jupiter is set up for prime observations. We will integrate mutual events of Jupiter’s Galilean Moons into our summer 2021 events. So take a moment on May 2nd to welcome Jupiter to the springtime madness.

This coming Monday, April 26, 2021 at 11:33 pm ET, the Full Moon will occur for April, called the Full Pink Moon. Now the Moon will not appear pink in color due to the date. It will appear pinkish or orange in color if viewed very low on the horizon when rising or setting, but this is due to Rayleigh Scattering, and will happen with every Full Moon, regardless of name. The reason the April Full Moon is called the Pink Moon is due to all the blooming of the herb moss pink, which is one of the earliest widespread blooming flowers of spring in the eastern US. After the Full Moon occurs, we will start seeing the phases of the Moon wane, eventually allowing for the dark nights to return. Unfortunately, the Moon will wane into the morning sky, which means we still have a good two weeks before catching that amazing view of the Milky Way without the interference of the Moon. Regardless, take a moment to catch a view of the Full Pink Moon on Monday night, and gear up to celebrate May Day (May 1), which is one of the four cross-quarter days.