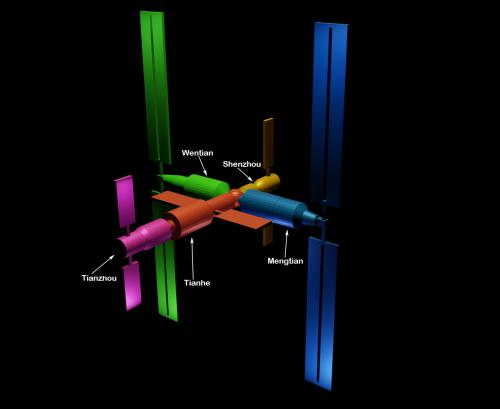 On April 29, 2021, China’s National Space Administration (CNSA) launched the core module of its new modular space station. The core module, named Tainhe, is the first component of the larger Tiangong Space Station, which will be assembled in space in a similar fashion to how the International Space Station (ISS) was assembled. The Tainhe core module is equipped with several docking ports for the CNSA Tianzhou and Shenzhou spacecraft, as well as two other experimental spacecraft. Life support and living quarters for up-to three astronauts are available for future habitability. The core station module measures 54’ in length with a maximum diameter of 14’.

The best part about all of this is that Tainhe is easily visible when it passes over our region. On Thursday, May 6, 2021, we started tracking the Tainhe station on the Frosty Drew Satellite Pass Prediction utility at: https://frostydrew.org/observatory/#satellites. This will list daily viewing opportunities of Tainhe as well as other notable satellites. Passes predicted by our utility are for Southern New England, and generally acceptable for the entire Northeast. 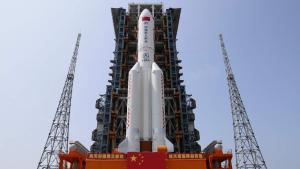 The first stage of the primary rocket that launched Tainhe into orbit, Long March 5B, is apparently tumbling in a secondary orbit as it falls back to Earth, and is also quite visible. Re-entry of the rocket is expected to occur between May 8th and May 10th and will likely burn up over the Pacific Ocean. As we close in on the re-entry date, better telemetry of the rocket’s re-entry location will become available. If re-entry is predicted to happen over our location, which is possible, we will certainly post about it.

Regardless, we now have another space station that will put on a stunning show of daily passes to the enjoyment of all of us down here on the ground. Two laboratory modules will be added to the station in 2022, which will make the station larger and brighter when observing. The addition of the Tiangong Space Station brings another space based residency to our planet, and is a fantastic example of the things that we are capable of. 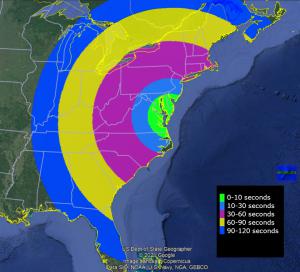 Tomorrow night, Saturday, May 8, 2021, starting at 8:04 pm ET, a 40 minute launch window will open for a suborbital sounding rocket that is part of a research project called KiNet-X. The project’s primary objective is to study problems with space plasmas. To do so, the rocket will release barium vapor into the atmosphere. When this release happens the vapor will form two green-violet clouds very quickly. The best part is that all of this will be visible along the entire East Coast, depending on local weather conditions. Southern New England will catch a view of the launch vehicle about 50 seconds after launch. Then about 8-9 minutes later, the green-violet spiral cloud formations could be visible. Weather forecasts, at this time, are calling for totally overcast conditions for the launch window tomorrow night, of course. But all that could change, and if local weather at Wallops Flight Facility in Virginia, which is where the launch is taking place, are inclement, the launch could be postponed. Regardless, let’s hope for clear(er) conditions and a good view of the launch.

Heads up on the return of the International Space Station (ISS) to the evening sky over the US, during the time of the year that every nighttime pass is visible from dusk to dawn. As we approach the Summer Solstice in the Northern Hemisphere, our nighttime periods become quite short, which will cause the space over us to remain in sunlight well into the night. Depending on the location of the ISS in its orbit, which is inclined 51° to Earth’s equator, the ISS can remain in sunlight during every pass over our region during this time. Each day this week every morning pass of the ISS is visible. But starting on Friday, May 14th, every pass from dusk till dawn will be visible, totaling 5 visible passes per night. Add in that China’s Space Station (TSS) will start producing visible evening passes on Thursday, May 13th, and we have quite a space station visibility show happening this month. Next Friday, we will post several pass viewing opportunities of both stations.