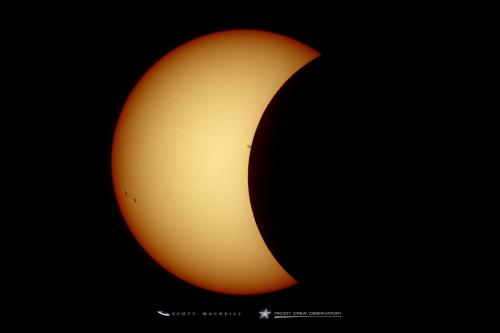 On Thursday, June 10, 2021 a fabulous Annular Solar Eclipse will occur for the extreme Northern Hemisphere. New England is too far south to experience the annular eclipse, but a stunning partial eclipse will be visible at sunrise. That is if the weather decides to cooperate.

An annular eclipse happens when the Moon reaches its New phase, called conjunction, along the ecliptic (the path the Sun takes across the sky), during apogee (when the Moon is at its furthest from Earth). The New Moon happens when the Moon orbits in between the Earth and the Sun, which occurs every 29.5 days. But the Moon orbits Earth inclined 5.1° to the ecliptic, which means that the New Moon usually passes either above or below the Sun when viewed from Earth. Occasionally, the Moon will reach its New phase on the ecliptic, actually about twice per year, which will cause the Moon to pass into our view of the Sun. I often hear about how the Moon perfectly fits over the Sun when viewed from Earth during an eclipse, but this is not entirely true.

The Moon orbits Earth in an eccentric orbit. Which means the Moon’s orbit is not a perfect circle. It has a near point to Earth, called perigee, and it has a far point from Earth, called apogee. Every orbital cycle (27.3 days) the Moon will reach both perigee and apogee. If an eclipse happens in the days near perigee, the Moon will fully eclipse the Sun. But in the days around apogee, the Moon will not fully eclipse the Sun, leaving a ring of the Sun’s photosphere visible around the Moon. When the latter happens, we call it an annular eclipse.

Viewing the annular eclipse on Thursday will not be as easy as the last eclipse we had in New England (August 2017), because it is happening during sunrise. The eclipse begins at 4:37 am ET over Southern Rhode Island, with sunrise not happening until 5:19 am. Which puts the eclipse well under way at sunrise. Maximum eclipse for our location will happen at 5:31 am, when the Moon eclipses 71.8% of the Sun. The eclipse will continue until 6:30 am, when the Moon exits the visible area of the Solar Photosphere. The tricky part is finding a location with a good view of the ENE horizon, considering that maximum eclipse will happen when the Sun is a mere 2° above the horizon. At the end of the eclipse, the Sun will only be 12° over the horizon. If you live on the Cape, then you are totally good to go! In Rhode Island, pretty much any place along the west coast of the bay should work. 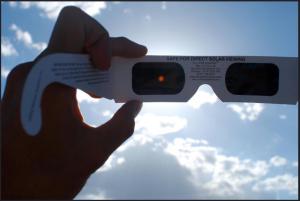 Viewing the eclipse will be fantastically memorable experience, but safety is paramount to forming a lasting positive memory, instead of a lasting vision impairment! Read about Safely Observing a Solar Eclipse

At Frosty Drew Observatory and Science Center, we will be live streaming the event from Point Judith. We are unsure at this time if we will open the Observatory and Science Center for the event. If we do, solar telescopes will be set up for visitors to safely observe the Sun. We will be streaming the eclipse live on our YouTube channel and on our website. Expect an update in your inbox on Wednesday, June 9th. Regardless of how you plan to observe the eclipse, either online or in person, it is certainly not an event to miss out on. In New England we often get the shaft on solar eclipses. So let’s hope the sky stays clear for a fabulous late-spring morning with an eclipse.