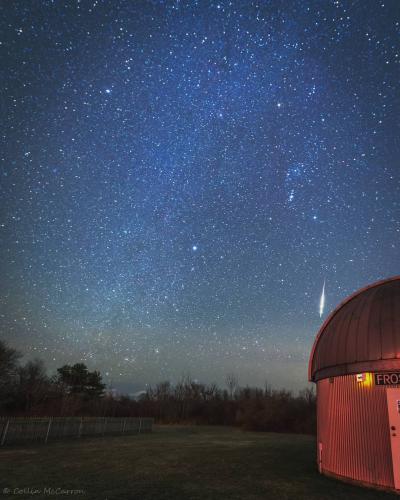 Summer through early winter is meteor watching season on planet Earth, with several meteor showers occurring, there is always something happening in the sky. In 2021, we have seen a nice increase in regular meteor activity out at Frosty Drew during the overnight hours, and there have been some surprising meteor showings accompanying some showers. An example would be the intense Perseid outburst that unexpectedly happened overnight on the third night after the peak night of the Perseid Meteor Shower. Well meteor activity is certainly not dwindling, and with the switch to longer periods of nighttime, and the coming annual Taurid Meteor Shower, the show is just going to get better.

The Taurid Meteor Shower kicks in on September 28th with the South Taurids, and will continue until December 2nd when the North Taurids end. Both meteor showers are connected and result from the same comet – 2P/Encke, which is a periodic comet that swings by Earth’s orbit once every 3.3 years. What makes the Taurid meteor showers stand out from others, are their reputations for producing a higher than average number of fireball meteors, which are meteors that are much brighter and longer lasting than the average meteor. It’s not uncommon to have fireball meteors that streak the entire sky, fragment, or even produce sound. There is a cycle that has emerged, associated with a larger increase in Taurid fireball activity, which runs on a seven year basis. 2021 is not the seventh year of the cycle, but 2022 is. Even though 2021 is not a seventh year, Taurid fireballs will still be present, just not at the level we will see next autumn. Both showers peak in early November, with the S Taurids peaking overnight November 4-5 2021, and the N Taurids peaking overnight November 11-12, 2021. The Moon will favor the S Taurids, with the N Taurids accompanying the first quarter Moon.

The best way to catch a view of a Taurid fireball is to be outside overnight looking up, preferably on a night without a bright Moon. If you happen to catch a photo of a fireball meteor, be sure to post it on our Facebook page and we’ll share it to our timeline. Note that a meteor and a plane are not the same thing, no matter how much you want them to be. Check out this awesome photo of a Taurid fireball that was captured at Frosty Drew Observatory in early December 2018 by Collin McCarron, then make plans to be out as often as possible, looking up, and perhaps you may see several Taurid fireballs as we make our way through the festive season of the year. 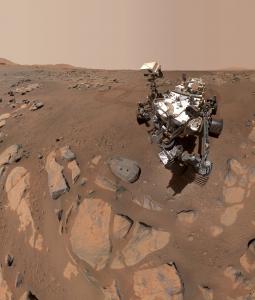 Since February 18, 2021, the Mars Perseverance rover has been exploring its new home on the red planet. During that time period the rover has been flying its rotorcraft – Ingenuity in an effort to more broadly survey the terrain and find regions of interest, drilling into rocks searching for fossilized evidence of previous life and details of the history of Mars, and it has (of course) been taking amazing photographs, not only of Mars and the work it’s doing but also of itself. Take a break this weekend and sit back with a stunning photo gallery of Mars from the eyes of Perseverance. Thanks to taxpayer dollars funding the NASA Perseverance mission, all images and data are accessible to the public, and are readily available for you to process and make your own discoveries. Interested in building Mars landscape mosaics, or digging through the mountains of raw Mars images to find something perhaps overlooked? Head over to the Perseverance raw image archives and start the search for the next big discovery. Mars Perseverance is slated for surface operations to last about one year, but if anything is to be said about the past resilience of NASA’s rovers on Mars, we can probably expect decades of amazement! Take a moment to read up on the mission, what has happened, and what is in store.

On August 2, 2021, Earth reached the point in our orbit where Saturn was on the opposite side of Earth than the Sun. This is called the Opposition of Saturn and is the best time to observe and image Saturn. At Frosty Drew Observatory, we have been running an ongoing project to catalog the change in Saturn’s axial tilt orientation on a yearly basis. We started the project in 2012 and it will continue until 2042. This is because it takes Saturn nearly thirty years to complete one full orbit around the Sun. 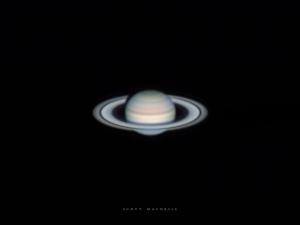 Being that Saturn is tilted 26.7° on its axis, and the rings are orientated to Saturn’s tilt (called Obliquity), and sit over Saturn’s equator, we can easily see Saturn’s axial tilt. As Saturn progresses in its orbit around the Sun, Saturn’s tilt, like Earth’s, does not change. But as we catch up to Saturn every year in our orbit, the orientation of Saturn’s tilt, as it applies to the Sun, and Earth will change progressively. This causes our view of Saturn’s rings to change from appearing tilted 26.7° towards us, to 26.7° away from us, and back, over a period of nearly thirty years. At Frosty Drew Observatory, we try to capture our yearly image of Saturn around the opposition period, though in 2021, seeing conditions, which is a measure of local atmospheric stability, were not working to our favor. Instead we captured our image overnight September 7-8, 2021, after Saturn was just over a month past opposition. This allowed for a nice view of the shadow that Saturn casts on its rings. We can see that because the angle that we are viewing Saturn from is not the same angle that sunlight is shining on Saturn. Allowing us to see a small section of the night side of Saturn’s rings. Check out our 2021 image of Saturn here. Then make plans to visit Frosty Drew Observatory and Science Center this autumn to see Saturn in the big telescope with your own eyes.