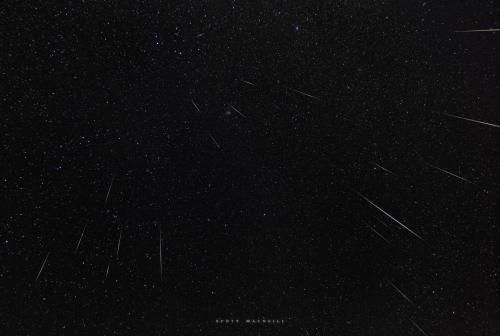 As twilight wanes tonight, October 8, 2021, the annual Draconid Meteor Shower will peak. Not the most active shower, the Draconids usually bring an increase of around 5 meteors per hour to regular meteor activity. Though the Draconids have a reputation for periodically producing outburst conditions, with hundreds to thousands of meteors per hour. Outburst conditions usually coincide with perihelion passage of the shower’s parent comet, 21P/Giacobini-Zinner, a periodic comet that has a 6.6 year orbital period around the Sun. During perihelion, which is the comet’s closest point to the Sun in its orbit, Earth may pass through a denser stream of comet debris, resulting in a large increase in meteor activity. Historically, all outbursts were not always associated with perihelion, and passing through a dense stream of debris is always a possibility. Will this year’s Draconids bring an outburst? Probably not, but it is still possible. Regardless, the Draconid shower will bring a nice increase to the already active sky due to the ongoing Taurid Meteor Shower and Orionid Meteor Shower. The best way to observe the Draconids is to lay on your back facing the zenith (top of the sky) and orientate your feet to the north. You will need a dark place to observe from, and with the thin 13% crescent Moon setting early, sky conditions are prime. 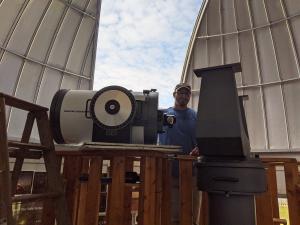 Telescope Replacement Update:
Over the past week the Meade LX200 EMC 16” Schmidt Cassegrain Telescope has been disassembled and removed from the Observatory building. We have also removed the Meade pier from the cement foundation, exposing the original observatory telescope pier. The next steps will involve removing the original telescope pier and preparing the pier foundation for upgrades to accept the PlaneWave pier. The Meade telescope, which was removed, is on display in the Frosty Drew Science Center for the next several weeks as we modify it for re-use in another station. Stop in and see the old Meade on display, and take a peek at the Observatory dome without a telescope.

Save the Date:
International Observe the Moon Night will occur on Saturday, October 16, 2021 across the globe. This is a day for the entire planet to gather together in recognition and celebration of the Moon. Frosty Drew Observatory and Science Center has been hosting an annual event for this day since its inception, and will continue that tradition this year. On our campus we will have several telescopes set up on the 85% waxing crescent Moon. Some telescopes will offer a wide field view of the entire Moon, others will show close up views of cratered regions and lunar maria. The Lunar Lounge will be set up and will show a live view of the Moon from a telescope projected onto the NW side of the Sky Theatre building. Inside the Sky Theatre, NASA Solar System Ambassador Frank Puglia will return to present about the Moon and the Mars Perseverance mission. In the Science Center we will have our Apollo 11 mission landing site exhibit on display alongside other lunar exhibits. In the Observatory we will show a lunar featurette on our 40” display panel. This is a night to fall in love with the Moon. So pencil us in, and stop in for a night of lunar freak outs.