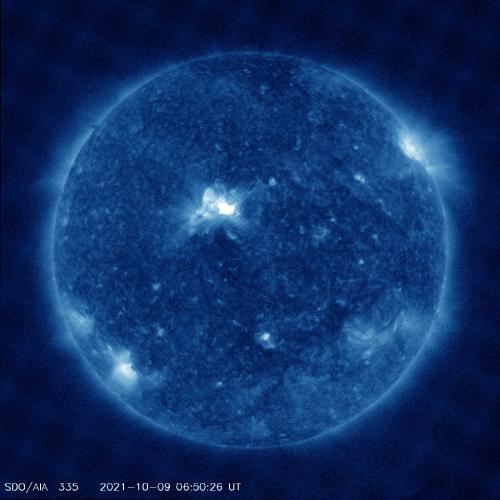 This coming Thursday, October 21, 2020, during the morning hours, the annual Orionid Meteor Shower peak will occur. Bringing with it an increase of about 20 meteors per hour to regular meteor activity, the Orionids are somewhat of a sleeper. Add in that the Full Moon will accompany the Orionid peak this year, and you may want to sit this one out. Though if you just can’t pass up a chance at catching sight of shooting stars, then it is still worth a watch. The key is understanding that only the brightest meteors will be visible, which means you will probably see more Taurid fireball meteors than actual Orionid meteors. Don’t expect 20 meteors per hour, that will just not happen with a Full Moon present. To catch a view, find a spot with a wide open view of the sky, lay on your back orientated in a way that a tree or other structure will block the Moon from your view, and look to the zenith.

The Orionid Meteor Shower itself gets its name from the constellation where meteors appear to radiate from, in this case it’s the constellation Orion – one of the more popular constellations in the night sky. Orionid meteors are a product of comet 1P/Halley (Halley’s Comet), which is a periodic comet that swings by Earth every 75 years. As it orbits the Sun, Halley’s Comet will leave a debris field, largely comprised of tiny pieces of ice, in its orbit. Every October, Earth passes through this region of debris, which gets captured in Earth’s gravity and enters the atmosphere at speeds of 41 miles per second. Which is way too fast for Earth’s dense atmosphere. As a result the particles quickly burn up leaving streaks of light in the sky. Even though the Orionid peak is somewhat of a dud, the origins of the shower are notable. So take a moment to step out Thursday morning and perhaps catch sight of a few pieces of Halley’s Comet streaking across the sky.

Speaking of meteors, last Friday afternoon (October 8, 2021), just after sunset, a super bright fireball meteor was visible from the Frosty Drew campus as well as along the entire Southern New England coast line. Several of our visitors observed the fireball, either on site or in transit to our location. Frosty Drew Astronomy Team member Jessica MacNeill, who is usually at the Greeter’s Station outside the main gate to the Observatory Courtyard, had a fantastic view of the fireball, which resulted in a official report to the American Meteor Society (AMS), contributing to the numerous reports that came in across Southern New England. The time and location of the fireball makes it less likely that it was a Taurid fireball, though the direction it was moving is consistent with a Taurid. Regardless, it is fireball season because of the Taurid meteor showers, with both showers being currently active. This event is proof that you never know when or where you may see a super bright fireball meteor, even during the daytime. So keep looking up and you just may catch sight, and possibly sound, of a stunning fireball meteor. 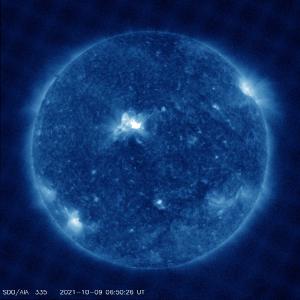 It’s been quite a while since we have heard any claims that we are all going to die because the Sun is in Solar Maximum, which is rather silly because Solar Minimum is actually the side of the 11 year solar cycle that is dangerous to Earth-based life. The reason it’s been so quiet is because Solar Maximum peaked in 2013-2014 and since then we have descended into a deep Solar Minimum. At the lower point of Solar Minimum is when the next solar cycle will begin, and this happened in December 2019, when we departed Cycle 24 and commenced Cycle 25. FYI, the solar cycle is an 11 year cycle of sunspot activity on the solar photosphere, during which time Solar Maximum will bring very active sunspot activity and Solar Minimum will bring little-to-no sunspot activity. It was in October 2020 that we officially saw the end of Solar Minimum. When looking at historical activity trends of past cycles, it is clear that Solar Maximum comes on very quickly, then slowly fades out to Solar Minimum, This means we can start to expect a fast increase in sunspot activity now that Solar Minimum is over, and we have seen exactly that. Those who came out to our Summer Stargazing Nights solar viewing program had certainly noticed the lack of sunspots we had this summer. Though since the summer, we have seen a huge increase in sunspot activity, with numerous sunspots visible on a daily basis. But this past week a huge sunspot had surfaced and raised questions if it would end up flaring, producing Earth facing coronal mass ejections (CMEs). Then on early Saturday morning it happened. The flare was one of the first few M-class flares of Cycle 25 and totally Earth-facing. Check out this image of the moment the flare occurred. It produced a large CME which arrived at Earth on October 11th, producing a Kp 6 geomagnetic storm that brought the Aurora Borealis as far south as Cape Cod, MA. Check out this image captured over Cape Cod. Overall, this is just another indicator that Solar Maximum is coming and Northern Lights and solar views will keep getting better.

As a side note on the Northern Lights and observing. We get a lot of call ins and online inquiries about visiting Frosty Drew Observatory and Science Center to see the Lights. As a basic rule, you do not want to drive south to see the Northern Lights. Frosty Drew is located on the south coast of Rhode Island with only the Ninigret National Wildlife Refuge between us and the Atlantic Ocean. This makes Frosty Drew a poor selection for observing the Lights, even with the super dark sky. Heading north will significantly increase your chance of catching a good view.

There is this comet named Comet 29P/Schwassmann-Wachmann (29P), that is part of a class of comets called Centaurs, which are comets that orbit between the orbits of Jupiter and Neptune. Well 29P has a rather unique property in that it frequently undergoes cryovolcanism, which is the eruption of water vapor into space. When this happens the comet will increase significantly in brightness as well as visible size due to a huge atmosphere that forms around the comet’s nucleus, called a coma. Over the past couple of weeks, 29P has been undergoing some intense cryovolcanic activity, which has resulted in a huge coma forming around the comet, larger than the diameter of Jupiter, and the visibility of the comet becoming so bright that it can be seen with an 8 inch backyard telescope. The comet is currently in the constellation Auriga, which places it at zenith in the morning hours before the sun rises. Over the next couple of nights, if clouds permit, will be a great time to get a view. After which the bright gibbous Moon will move into the morning and obscure our view for weeks to come. Comet 29P has an orbital period of about 15 years and never gets closer to Earth than Jupiter. Perhaps we will snap a photo of the comet before the Moon crashes the show. 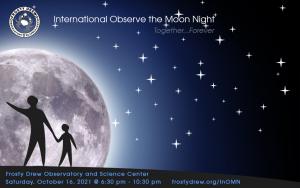 Tomorrow is International Observe the Moon Night, a day where thousands of organizations across the planet engage in showcasing the Moon to the general public. Frosty Drew Observatory and Science Center will be part of the celebration and will kick off the weekend tonight, then we’ll host a special event tomorrow night, Saturday, October 16, 2021 from 6:30 pm to 10:30 pm. We will have telescopic views of the Moon, live projections of the Moon, presentations about the Moon from NASA Solar System Ambassador – Frank Puglia, exhibits on the Moon, and more. It is a perfect night for the lunar geek. Weather at this time is not looking too promising, but we will work with what we have. So pencil in tomorrow night as the night that you become acquainted with the Moon.