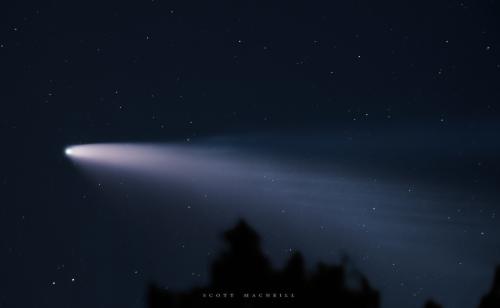 Overnight last night, the annual Southern Taurid Meteor Shower peaked, bringing with it a meager increase of 5 meteors per hour in regular meteor activity. But it’s not the peak rates that make the Taurid meteor showers awesome, it’s the fireball meteors they bring. The Northern Taurid Meteor Shower will peak overnight November 11-12, 2021, and will also bring a meager increase of 5 meteors per hour. Being that we are in between peak periods, which are quite close to each other, and the Moon is just one day past its New phase, we are set up very nicely to spot fireball meteors over the next several nights. Spotting a Taurid fireball is not difficult, you just need to be looking up. Considering that there is not a lot of frequent activity with the Taurid showers, unlike the Perseids, Geminids, or Quadrantids, you will not see meteors every few minutes, but spotting a fireball meteor will certainly be a memorable experience. While you are out and about this week, be sure to keep an eye on the sky just in case a Taurid fireball ends up blazing Earth’s atmosphere.

Now that the new PlaneWave CDK600 telescope is installed into the Frosty Drew Observatory, configurations and calibrations are underway and nearly completed. We had hoped to have them completed before tonight (Friday, November 5, 2021), but small hangups have slightly delayed our schedule. It’s reasonably safe to assume that we will be good to go by Friday, November 12, 2021, which will be the day that we kick off our First Light Celebration of the new telescope, which will run for three weeks, and will offer views through the new PlaneWave telescope both Friday and Saturday nights each week. Starting this week we will begin publishing a lot of information, photos, videos, and more of the new telescope, its installation, and how excited we are. Check out the new photo gallery we created for the PlaneWave. This gallery will frequently show updated imagery of the installation and new telescope. We will also be posting videos to our YouTube channel. Keep an eye on our events calendar for First Light Celebration dates.

Earlier this year, a new long period comet was discovered at the Mount Lemmon Observatory in Arizona. The comet is named A1 Leonard and potentially has an 80,000 year orbital period! At this time, comet Leonard is making its way towards its closest encounter with Earth, which will take place on December 12, 2021 at a distance just shy of 35 million miles. After which, it will continue towards the Sun, where it will reach perihelion (closest point to the Sun) on January 3, 2022. At this time, it looks like comet Leonard could reach naked eye visibility in early December. The comet has a good approach angle for observing a tail, and it has already developed a rather short, yet dense tail. At Frosty Drew, we will begin monitoring the comet this week for increased brightening and will post any images we capture to our Facebook. If we think the comet will become bright enough to spot with binoculars, we will start posting viewing charts and times. After Comet F3 Neowise became naked eye visible in mid 2020, comet Leonard has quite a bar to reach, and we don’t expect it to become that bright. But comets are notoriously hard to predict and do weird things, like undergo sudden outburst, which will significantly increase the comet’s brightness. Being that we have never seen comet Leonard before, we are unsure what is in store for us. But what we do know is that it will not impact Earth, so don’t listen to the doomsayers. Regarding close passes, Leonard will pass rather close to Venus on December 18, 2021 at a distance of 4.2 million miles. Let’s hope for a great Holiday comet this year. It’s been a while.