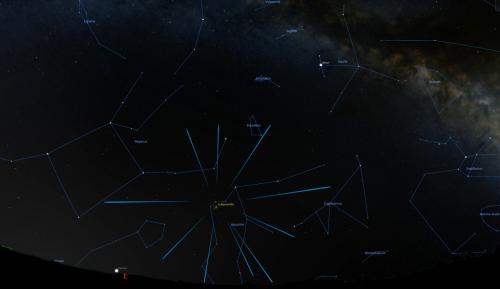 I always look forward to observing a good display of shooting stars. I’ve watched countless “burning rocks” plummet through the Earth’s atmosphere in the 45 years I’ve been an amateur astronomer. The experience doesn’t get old, except perhaps when the expected peak of activity falls far short of forecasts.

I hope the weather gods cooperated with April’s Lyrid meteor shower back on the night of April 22-23. Unfortunately, the May Eta Aquarids on the night of May 5 to the early morning of the 6th will be severely hampered by an almost Full Supermoon, the last of 2020’s supermoons. The meteors, remnants of Halley’s Comet, enter the Earth’s upper atmosphere head-on at 41 miles per second. We can expect to see no more than 10-15 swift and yellow shooting stars per hour under a bright moonlit sky.

(Note: In researching the shower characteristics for this May’s Eta Aquarids among several sources, I did find discrepancies regarding the peak morning of activity. Some sources had the peak occurring on the morning of the 5th, while others stated the 7th. The Eta Aquarids do present a spread out peak, so depending upon the weather I would recommend observing on either of the three mornings if you have the time. Regardless, the bright Moon will affect your meteor counts. At least Aquarius will be above the southeastern horizon with the Moon in the southwest. I’m trying to be optimistic here!)

The meteors appear to radiate from the constellation of Aquarius, not a very prominent star pattern. Around 4:00 a.m. Aquarius will be located about 12 degrees above the east-southeast horizon. The shower’s radiant point is in the Water Urn asterism (looks like a Y-shaped group of stars). While the meteors emanate from this region of the sky, scan around the entire sky to maximize your chances of observing one.

It’s even possible you may see a few bright “earthgrazers,” shooting stars that blaze long and slow along the horizon. And because the Eta Aquarids are very fast meteors, forty percent of them leave long persisting dust trains when they disintegrate. So, despite the bright moonlight, all is not lost for the Eta Aquarids this year.

The Full Moon on the 7th at 6:45a.m. goes by several names, many of which are derived from Native American cultures. May’s full moon is known as the Full Flower Moon because spring flowers were heralding a new season, Other names less frequently used are Full Corn Planting Moon and the Milk Moon.