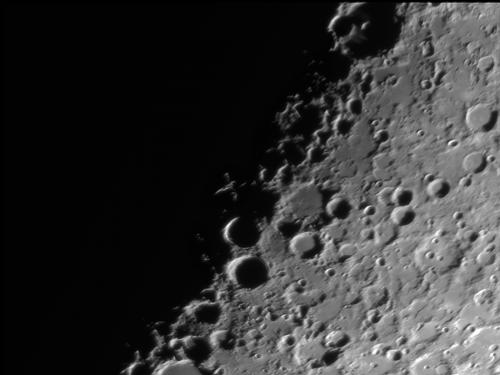 Tonight, the First Quarter Moon will rise. This principle phase allows for interesting views along the lunar terminator, which is the line that separates the daytime area from the nighttime area. This is where the best features are visible because sunlight shines across the surface, instead of at the surface, allowing for shadows to cast. These shadows give depth of field to the view. There are two features that occur around the First Quarter Moon, where only parts of crater rims are in sunlight, but the crater floor and surrounding landscapes are still in shadow. When this happens we see the Lunar X and Lunar V. Let us know if you have seen these features before.

Last Friday, April 1, 2022, was the annual 401 Gives fundraiser for Rhode Island non-profit organizations, and an important day for Frosty Drew Observatory and Science Center. Though late afternoon rain hampered our afternoon and evening plans, we still had a great day! Thanks to the support of so many of you, we were able to raise $2,855.00 towards our mission to enlighten, discover, inspire- through education and research- knowledge about science, the night sky, and the universe. We are so grateful for your support! This is a big year for Frosty Drew as this is the year that we fully unveil our new telescope, and all that we are going to be doing with it. We also have new presentation stations that will be in use this year, including our new Under the Willow station where we will host family friendly story time sessions. We are also re-introducing the old 16 inch Meade telescope, that used to be in the dome, as an outdoor Courtyard telescope! The Science Center is currently being updated to support a new exhibit showcasing our Messier Catalog Re-imaging Project. Then, later this year, we will unveil a new station around a 10 inch binocular! Imagine seeing the rings of Saturn in full out 3D splendor?! Your support is what makes all this possible. Thank you!! 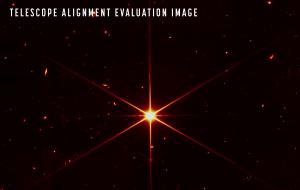 On the James Webb Space Telescope (JWST) front, progress continues on schedule. We recently wrote about the achievement of spot on alignment of all primary mirror segments, and moving towards operations where all 18 segments are now functioning as one 21 foot wide mirror. The next step was to integrate that alignment with all imaging devices on the observatory. The initial alignment was only applicable to the Near-Infrared Camera (NIRcam), though it has now been applied to the Fine Guidance Sensor (FGS), Near-Infrared Slitless Spectrograph (NIRISS), and the Near-Infrared Spectrometer (NIRSpec). This milestone largely marks completion of all alignment procedures. At this time, cool down operations of the Mid-Infrared Instrument (MIRI) are continuing. Most of the sensors on the observatory will function at 34-39°K, but MIRI needs to cool to operating temperatures below 7°K. This will require an active cooling solution that uses helium gas forced through a flow restriction. As the gas exits the restriction and expands, it becomes cooler. All other instruments on the JWST use passive cooling measures. This process is a bit risky because the process requires cooling to happen immediately for it to be successful. Alternatively, if heat loads are higher than expected, and cooling does not kick in immediately, the process could start heating up the MIRI instrument. So far, everything has worked out fantastically with the JWST, you know, aside from being delayed for over a decade. But that delay is why things are working out so well. We have had so much time to practice and learn these processes. Follow along with the progress of the James Webb Space Telescope.

Every morning this month, fantastic conjunctions of the four brightest planets are happening in the morning predawn sky. Though this coming week will be a notable time to be out. As it happens, Mars, Jupiter, and Saturn have all moved into the morning sky, and are rising a bit earlier with each passing night. Since Venus has taken on its role as the Morning Star, Venus has joined the party. Considering that each of these planets are different distances from us and have different orbital periods, the planet will appear to advance across the sky at different rates, and at times, different directions (retrograde vs prograde motion). This coming week, all four planets will eventually arrive at visibly equal distances from each other along the ecliptic. Best visibility of this placement will start on the morning of April 15th and continue over the next several mornings. Even though the planets will not appear to be equally spaced this weekend and early week, all four planets are visible. Starting in the East the first planet will be Jupiter, which will also be the lowest on the horizon, the next planet is Venus, and will be the brightest of the set, next up is Mars, followed by Saturn. Make plans this week to get out on clear mornings to view the parade of planets, especially if you are up early for your workday. If you catch a view, let us know by replying to this newsletter or posting on our Facebook. Now get out there and celebrate springtime mornings with the four brightest planets.