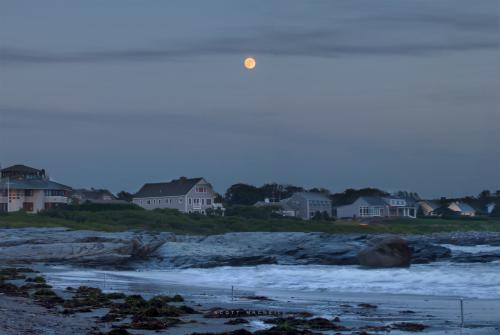 On Saturday, April 16, 2022 at 2:58 pm, the April Full Moon will occur. The April Moon carries the moniker – The Full Pink Moon. This is because of all the blooms we start seeing this time of the year as springtime sets in. Specifically, the April Moon gets its name from a wildflower named moss phlox, which is pink. Though in 2022, the April Full Moon also carries another name, the Full Paschal Moon. Which comes down to the astronomical assignment of the date of the Christian observance of Easter. The first Sunday after the first full moon after the Vernal Equinox will be the date of the Easter observation. Which makes the first full moon after the Vernal Equinox the Full Paschal Moon. This places Easter on Sunday, April 17, 2022. As for super moons and all that, the April lunar perigee, which is when the Moon is closest to Earth in its 27.3 day orbit, happens on Tuesday, April 19th at 11:17 am. Though not a perigee-syzygy (super moon), the Moon will be a bit larger and brighter in the sky. Though at such a small difference it will go unnoticed. Other names that the April Full Moon carry are the Breaking Ice Moon, Frog Moon, and Moon When the Ducks Come Back. So step outside tomorrow night and celebrate springtime with the Full Pink Moon of April. 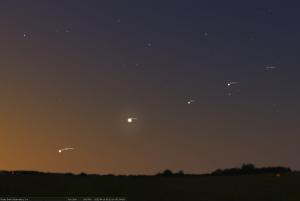 Over the last week we have had several write-ins about the super rare, unbelievable, magical, planetary alignment happening on April 17th. I love how the media can’t resist intense levels of exaggeration, and fantastication in regards to reporting celestial events. Though it does give me a perspective of how I should consider the severity of other news that is put out by that source. As for the planetary event, it is not a planetary alignment, but instead a planetary conjunction. The differences are a little blurred. An alignment occurs when all planets involved form a line starting with the Sun (note that other gravitational configurations would also be considered an alignment). A conjunction is when the placement of planets (and other celestial bodies) make their appearance significant in Earth’s sky. We see this every month with the Moon visibly passing close to planets along the ecliptic (path the Sun takes across the sky). The current conjunction is quite spectacular to view, but it is not even close to rare, and you can view it tomorrow morning if you choose, you could have viewed it this morning, and it will continue for much of April. The 17th will be a good opportunity to view as the planets will appear close to equally spaced, but that is not the only day it is happening. Also, there is a larger conjunction of the planets that is happening for most of the year, eventually bringing all 8 planets into the sky at the same time. Again, this is not rare either, but it certainly is exciting, and a life-enriching natural event that comes with being part of Earth.

As for viewing the conjunction. Set out to a location with a good view of the east → southeast horizon, and be there for 5:15 am. Look to the ESE and you will see four bright star-like objects in a line along a westward direction. What you are seeing are four of the bright naked-eye-visible planets. Starting with the easterly-most object the order is Jupiter, Venus, Mars, and Saturn. Though not naked eye visible, Neptune and proto-planet Vesta are there as well. The view will also be available for early predawn commuters. So make plans to get out for a view, it really will be spectacular. Every morning this week will be excellent. This also makes for a fantastic photo! If night photography is your dig, then this presents a fantastic opportunity to catch a great photo. 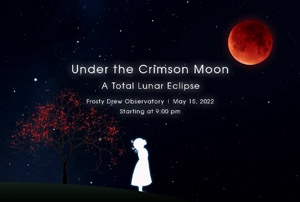 Save the Date!
Sunday, May 15, 2022 9:00 pm – 3:00 am
Under the Crimson Moon – A Total Lunar Eclipse
One month from today, a fantastic total lunar eclipse will take place over our region. The eclipse will begin at 9:32 pm Monday night and will start as a dimming of one side of the Moon. At 10:28 pm the partial eclipse will begin when a chunk of the Moon will start to appear missing. Total eclipsing of the Moon will start at 11:29 pm with maximum totality occurring at 12:11 am and ending at 12:54 am. Once totality ends, the partial eclipse will continue until 1:55 am. Frosty Drew Observatory and Science Center will be open for the entire eclipse. We will have telescopes set up in the Observatory Courtyard for viewing as well as a live stream of the eclipse in the Sky Theatre, and on other screens around the campus. This is a fantastic natural event and well worth a springtime night out under the stars. Another perk of this eclipse’s timing is that during the period of total eclipse the Milky Way will become strikingly visible, silhouetted by the crimson red Moon. Put the date on your calendar and make plans to be at Frosty Drew to experience a stunning view of a total lunar eclipse.