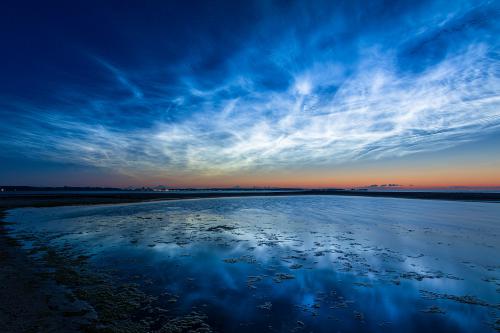 Now that we are within a few weeks of the Summer Solstice in the Northern Hemisphere, noctilucent clouds (NLCs) have returned to the late twilight sky for northern locations. NLCs are the highest clouds that can form in Earth’s atmosphere and are a product of summertime moisture rising into the thermosphere where water droplets will freeze and crystallize around tiny particles of meteor dust. As Earth spins on its axis, sunset occurs, which is when the region the viewer is in rotates out of direct view of the Sun, but the atmosphere overhead is still in direct sunlight. When the troposphere and stratosphere are in sunlight, we get the opportunity to catch a view of a spectacularly colorful sunset. But eventually the lower atmospheric layers will end up losing direct sunlight. At the end of twilight, the very top layers of the atmosphere are the only parts of the atmosphere still in direct sunlight, and darkness has very much set in. The wisps of meteor dust that are coated in frost will reflect sunlight, and become visible as iridescent wispy clouds, usually over the western horizon. The further north you are, the better chance you have of catching a view of NLCs. One Frosty Drew Astronomy Team member has seen NLCs at Frosty Drew in the past, though most of us are yet to see any. At 41.36° N latitude, we are a little south for a good view, but it is still possible. If you find yourself out during twilight on a very clear evening, take a moment to look to the western horizon as twilight wanes and you just may spot a haunting view of noctilucent clouds dancing in twilight.

Nearly every morning this spring we have had a stunning view of almost every naked-eye-visible planet in the morning sky. The planets have been changing positions, passing visibly close to each other, and interacting with the Moon and other stars. These fabulous conjunctions have been stunning for those who have seen them. At Frosty Drew, the Astronomy Team that is onsite during closed nights getting things done have had numerous views of these events. This past week, Mars and Jupiter passed each other close enough to catch a beautiful view of how red Mars is. This is because Jupiter gives us a comparative view, another object to contrast against Mars, which allows our brains to see the color in more detail. If you haven’t had a chance to catch a view of the stunning conjunction, you are not in danger of missing it. Views of the bright planets will continue well into the summer season. Though if you want to catch the best view, the weeks following the Summer Solstice will be the time to do so because Mercury will join the party. This will put every naked-eye-visible planet, plus the Moon, into the morning sky! We will write about this again as viewing opportunities approach, though you can catch excellent views right now just by stepping outside before sunrise when you are getting ready for your day. 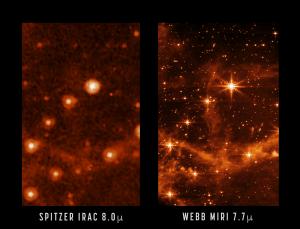 On the James Webb Space Telescope (JWST) front, amazement and fantastication continues! The observatory is quickly nearing completion of the instrument commissioning stage and is about to become fully operational. Once that happens the telescope will begin collecting the first image data that can show what the observatory is capable of. The first image release date is currently slated at July 12, 2022, and Frosty Drew Observatory and Science Center will theme much of our summer events around the JWST and the images it is capturing. Recently, a calibration image that JWST captured during mirror segment alignment was compared to the same field captured by the Spitzer IRAC (Infrared Array Camera). IRAC is the best space-based infrared telescope that we currently have. See the comparison image here. The image on the left is from IRAC, with the image on right being the JWST image. Keep in mind that the IRAC image is a product of a real imaging session, where the JWST image is only a calibration image, and low quality compared to the result of an actual imaging session. The differences are absolutely mind-blowing. This is what’s to come! Keep up with the JWST and its progress in becoming fully operational.