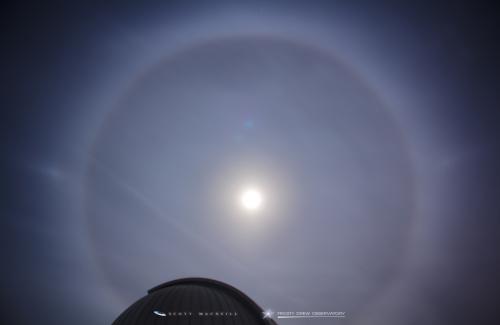 Now that the International Space Station (ISS) has ended evening passes over our region, China’s space station (Tiangong) has returned to the evening sky over the US, offering up fabulous viewing opportunities to evening sky watchers. Tiangong has grown in size over the past year, and has become quite bright when passing over. The station continues to receive upgrades and new modules, and should be completed sometime next year. Like the ISS, Tiangong orbits Earth inclined to the equator, which makes for periodic viewing opportunities that come in cycles. Though not as bright as the ISS, it is still remarkably visible. Here are a few notable evening passes of Tiangong for this weekend and coming week: 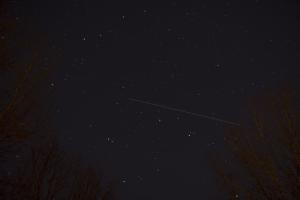 Orbital sunset occurs when the station orbits into Earth’s shadow. During this time, the station will disappear from our view, and residents of the station will experience sunset. For us to observe the station passing overhead, the station needs to be in direct sunlight, while on the ground, observers need to be in twilight or darkness. The only light we see when viewing the station pass over is reflected sunlight. Regarding the pass times listed above, these are applicable to Southern New England, and generally acceptable for any location in the Northeast. For daily passes of brighter satellites over this region, visit the Frosty Drew Daily Satellite Pass Prediction Utility (we list Tiangong as CSS (Tianhe)). Now get out and spot China’s space station pass overhead and be inspired by our ability to do such things!

Starting last week, the first of two Taurid Meteor Showers kicked off, The Southern Taurid shower. The Taurid Meteor Showers do not have spectacular peak viewings with hundreds of meteors ripping by. What they do have is a significant increase in fireball meteor activity. Especially during the overlap period when both showers are happening. Which will kick in on October 13th, when the Northern Taurid Meteor Shower begins. Fireball meteors are shooting stars that are brighter than average, and longer lasting. Sometimes fireball meteors will fragment with smaller particles streaking off of them. At times they will even have a delayed sound associated with them, kind of like sparking static. The Taurid showers have a seven year cycle of increased fireball activity, which is scheduled to happen this year. You do not need a super dark sky to observe a fireball meteor, some of which are even visible during the daytime. Though a wide open view of the sky will certainly be desirable. When the Moon starts to depart the night sky, in about a week’s time, take a moment to lay out under the stars. The prospects of catching sight of a fireball meteor will be at their best. If you do see or photograph a Taurid fireball, be sure to let us know by either responding to this email or by posting on our Facebook. Check out this image of a Taurid fireball that was captured at Frosty Drew Observatory by Collin McCarron in 2018.

Tomorrow morning, October 8, 2022, Mercury will reach the point in its orbit where it is at maximum western elongation. This happens when Mercury is at tangent with Earth and the Sun, and as a result, will appear at its highest point in the morning sky for its current orbit. Being that we are moving towards the Winter Solstice, the ecliptic is very high just before sunrise. The ecliptic is the path the Sun takes across the sky, and represents the plane of the Solar System, so all planets will be along that line. The timings of all this are making it quite excellent for viewing Mercury, either with a telescope, binoculars, or just the naked eye. To catch a view of Mercury, step outside at 6:00 am. You will need a good view of the eastern sky, about 10° over the horizon. Look for the bright star-like object hanging over the horizon, that is Mercury. In a telescope, you will notice Mercury’s third quarter phase. Even if you miss out tomorrow morning, you will have several opportunities over the next week to catch a view. Especially if you are a pre-dawn morning commuter! Let us know if you see it.