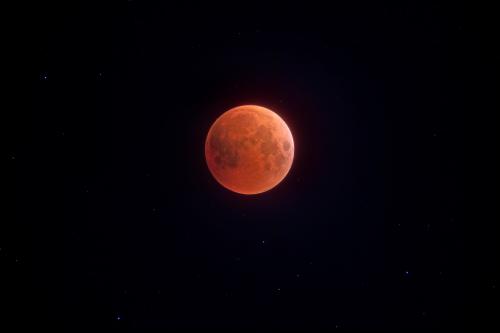 Tonight is Stargazing Night at Frosty Drew Observatory and Science Center, and the forecast for heavy rain and high winds will keep us closed tonight. We will usually host a cloudy night program on nights with inclement weather, though the remnants of Nicole will move through our region tonight, which will bring potentially dangerous travel conditions. As such, we will stay closed tonight, and open next on Friday, November 18, 2022 with our regular Stargazing Nights event. We’ll see you then!

On Tuesday morning, November 8, 2022 the last total lunar eclipse to occur for the next 2.5 years happened over New England. At Frosty Drew Observatory we had fantastically clear sky conditions to celebrate the view. Due to our location on the East Coast, we only experienced half of the eclipse. This is because the eclipse continued past local sunrise for our location. Over 100 visitors made the trek out in the wee morning hours before sunrise to experience the crimson red Moon. In 2023, New England will largely not see any lunar eclipses, aside from a sunrise penumbral, which will not be noticeable. In 2024 we will have a penumbral eclipse and a very slim partial eclipse. The slim partial will bring about 10% of the lunar surface into Earth’s primary shadow (Umbra), and will occur on September 18, 2024. It will not be until March 14, 2025 that we have another total lunar eclipse.

In the meantime, be sure to catch up on our gallery of photos captured during this past Tuesday’s eclipse. Over the next week or so, we will continue to add more images. 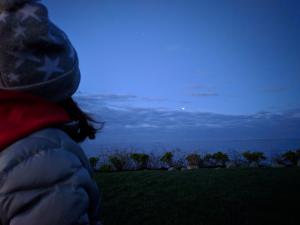 Orbital sunset occurs when the station orbits into Earth’s shadow, and quickly fades from our view. During this time, residents of the ISS will experience sunset, which happens once every 90 minutes. Note that these times are applicable for Southern New England, and generally acceptable for all of the Northeast. For daily pass times of the ISS and other bright satellites, visit the Frosty Drew Daily Satellite Pass Prediction Utility. Now put these times on your calendar and set your alarms to catch stunning views of humanity in space.

Now that the Moon has passed its full phase, it is starting to depart the evening sky, making its way into the early morning sky over the next week. This will bring super dark sky conditions back to Earth’s dark locations. During the autumn season, dark locations that are free of light pollution, like Charlestown, RI, get to experience a stunning view of the beautiful Andromeda Galaxy. 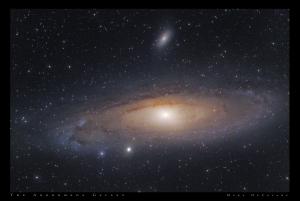 Andromeda, also known as Messier 31 (M31) is the largest galaxy in the Local Group, which is a collection of galaxies that the Milky Way Galaxy is part of. Residing at 2.5 million light years distant, the Andromeda Galaxy is one of the furthest objects we can observe with the naked eye just by looking up. Like the Milky Way, Andromeda is a barred spiral galaxy, but unlike the Milky Way – which has upwards of 200 billion stars, the Andromeda Galaxy has upwards of 1 trillion stars! Considering that both galaxies are part of the same immediate galactic group, they will eventually merge into a new galaxy about 3.8 billion years from now.

Observing the Andromeda Galaxy with the naked eye, will require a dark site. Trying this in the city will just not work out. The Andromeda Galaxy is found in the constellation Andromeda, which starts with the north-most star in the Pegasus Square, named Alpheratz. Once identified, follow the primary stars of the constellation Andromeda until reaching Mirach. Once at Mirach turn north, and follow until reaching the next brightest star. At that star, continue in the same direction that same length again, and you will not notice a bright blurry object in the sky, like a small cloud. That is the Andromeda Galaxy. See our finder chart. 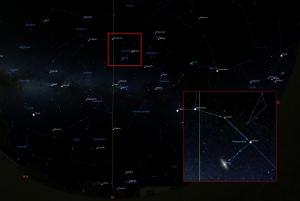