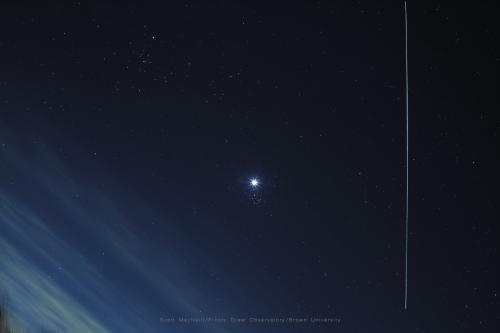 This coming Sunday, January 22, 2023, Venus and Saturn will arrive at their closest visible point in the ongoing conjunction that has been happening. Now that Venus has orbited past superior conjunction (opposite side of the Sun than Earth) it has reclaimed its role as the Evening Star, and has been showing up in the evening twilight sky. Since it has been so cloudy over Southern New England since the end of 2022, most residents have probably not even noticed that Venus has returned. On Sunday, Saturn, which has been setting earlier with each passing night, will visible pass within 19 arc minutes (1/3 of a degree) from Venus. At this distance, both will be visible together in telescopic field of view, showing Saturn’s rings and Venus waning gibbous shape.

To catch a view of the conjunction you will need to be at a location with a good view of the SW horizon and be there for 5:00 pm. Venus will be visible first, though about 10 minutes later, Saturn will become visible to the right of Venus. Of course, we will need the cloud bomb to cut us a break, which appears rather unlikely. Though Saturday, January 21, 2023 appears to be potentially clear enough to catch a view. The placement will not be as spectacular as Sunday’s conjunction, but the view will still be fantastic. So take a moment tomorrow evening (and Sunday if the sky is clear) to step outside and catch a view of the conjunction, and while you’re at it, take a look at the sky and remind yourself of what you are missing out on.

Regarding Comet C/2022 E3 ZTF, the views are getting better. Perihelion occurred on January 12, 2023, which is when the comet made its closest approach to the Sun. Since then the comet has begun to depart the inner Solar System and is heading towards Earth. On February 1, 2023, the comet will make its closest approach to Earth, and will consequently be in best viewing. The comet is still in the constellation Bootes, but will move into Draco tomorrow (January 21, 2023). As the comet continues its progression across the northern sky, it is rising earlier and earlier every night. Though the best times to catch a view are currently in the early morning hours when the comet is near the zenith (top of the sky). Recent images of the comet show that the tail has grown quite extensively and has been experiencing disconnect events. 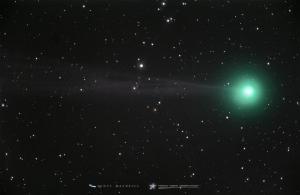 A disconnect event in a comet’s tail happens when a Coronal Mass Ejection (CME) impacts the comet and blows the tail off of the comet’s nucleus. Another tail will usually form very quickly, though the old tail will drift off with the solar wind. Now that the Sun is moving out of Solar Minimum, and sunspot activity is increasing dramatically, the likelihood of a comet encountering one of these solar events is increasing.

At Frosty Drew we are yet to get a view of the comet, thanks to the cloud bomb, though Sunday morning is looking rather promising for us to get out and catch a view and possibly some images of the comet, so stay tuned. We will post any images we capture to our Facebook (https://www.facebook.com/FrostyDrewObservatory) and on our website at: https://frostydrew.org/media_galleries.dc/get/group-media/tags-fdo/. If you happen to get a view of the comet or capture a photo, let us know by either replying to this email or sharing with us on Facebook or Instagram (@frostydrewobsy). In the meantime, here is a finder chart to aide you in locating the comet: https://frostydrew.org/media_galleries.dc/photo/gallery-807/p-2610/image-2023-Comet-E3-ZTF_1673631224.jpg. Happy comet hunting!

Last week, the International Space Station (ISS) returned to the evening sky over the US. Though I doubt anybody noticed because of the clouds. This coming week the ISS will not be putting on many spectacular passes, but you can still catch a view during a reasonable evening time slot. We often refer to evening passes of the ISS as “family friendly” because they usually happen when everyone is home and awake. Here are a few notable passes of the ISS over our region for the coming nights:

China’s space station – Tiangong has also returned to the evening sky over the US, offering up passes that may not be as bright as the ISS, but will be equally spectacular. Here are several passes of Tiangong for the coming nights: 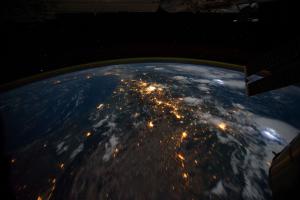 Though there aren’t many amazing passes of the ISS, it will still be quite visible as it passes by. Tiangong on the other hand will put on a stunning show this week, if clouds can depart. You can keep up with daily passes of the ISS, Tiangong, and other bright satellites over the Northeast at: https://frostydrew.org/satellites.