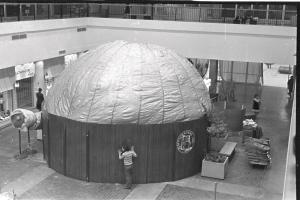 You may be thinking that my editors somehow switched the title of my monthly astronomy column with that of another columnist. What connection could there possibly be between astronomy and the once grand experiment called the Midland Mall? Well, those of you who have been Rhode Island residents for just more than 36 years may already know the answer to that question. Perhaps you were one of many visitors who experienced a memorable display presented by Skyscrapers (The Amateur Astronomical Society of Rhode Island) at the Midland Mall during a ten-day span from April 7 – 17, 1975. I dedicate this remembrance to the Midland Mall and all the people who helped to make the event a memorable one. The Skyscrapers organization was founded by Professor Charles H. Smiley of Brown University in May 1932. The society incorporated in November 1936 and the first order of business was to purchase the observatory on Peeptoad Road in North Scituate, the former property of Frank Evans Seagrave. The observatory became the home of Skyscrapers, and the membership always had a core group of individuals who were excellent caretakers of the observatory and the 8 ¼-inch Alvan Clark refractor. However, in the middle to late 1960s the “old guard,” many of them charter members, had long since retired and were passing away. The observatory fell into a state of disrepair and major upkeep was lacking. Membership in Skyscrapers was at a decline. During the fall of 1974, one of the next generation of Skyscrapers members, Dave Armitage, presented an ambitious idea to the organization. He proposed that the society should construct a portable planetarium to be hopefully erected at one of the local malls, and utilize Brown University’s vintage star projector to present a realistic nighttime sky. We would get great publicity for Skyscrapers, plus it would help attract new members. Dave subsequently presented the portable planetarium proposal to the management of the Midland Mall (now the defunct Rhode Island Mall) who were truly excited about the project. The mall manager presented the idea to the mall’s Merchants’ Association at a January 9, 1975 meeting. He reported that the merchants liked the idea, noting that nobody else had done anything like this in the state before. Negotiations continued for a short while and finally Skyscrapers was given the go-ahead. The mall looked on the effort as something to boost traffic during a “slow” period of the year, so they booked the planetarium for a week in April. As Dave recalled, “It was the first and only place we had asked. Fortunately it was a two-story mall. We definitely needed the height in order to inflate the dome.” The project was well under way during January, 1975. Dave worked out the design of the structure: a 25-foot wooden ring substructure with wood-grained paneling for walls, with a canvas fabric cut in 12 triangular panels that were sewn together to form the dome. Once the dome was completed, it was time to paint it. We used a metallic methyl ethyl ketone that smelled terrible. A simple task you might think. Unfortunately the canvas material was very porous and it soaked up paint like a sponge. It needed several coats, not only to make it light tight, but also to make it air tight! Otherwise it would not inflate!! The first couple of coats were done at Seagrave Observatory. While the dome was thought to be uniformly painted, we would later find out that there were excessive pinholes across a wide section of the dome. It ended up that we used these “points of light” to portray the Milky Way during our planetarium program. On two separate occasions while the structure was under construction up at Seagrave Observatory, wind damaged it considerably. Once we recovered from these setbacks it was time to test the inflation process. This task was accomplished by using two big fans. They worked great. When the exit door was shut and the fans were powered up, the dome inflated quickly. While the “portable” planetarium was being constructed, Dave Armitage worked on the planetarium show we would present. The show talked about how many stars were in the Milky Way, and how many could support life of some kind. You can read a complete transcript of the program by following this link: http://www.theskyscrapers.org1975-planetarium-show-transcript

The Shepard’s Department Store, which had anchored the east end of the Midland Mall, had gone out of business and the store was vacant. On Friday, April 4, 1975, we were able to move the pieces of our planetarium to the now empty store so we could assemble it out in the mall. First, however, we had to assemble the planetarium in the old Shepard’s building to finish the painting job after the second windstorm incident at Seagrave. (For several years later, after another store opened at the former Shepard’s location, we used to “visit” the paint stains on the floor.) Also, we realized that upon folding the dome for transport to the mall, the paint flecked off, causing more pinholes. Our inaugural show was scheduled to run on Monday, the 7th, but just before we were supposed to open, the fire marshal stopped by for an inspection. Our beautiful wood paneling, which formed the walls of the structure, did not meet the fire code. They were going to shut us down before we even got started. If we wanted to continue we would have to meet the fire code. So, we had to cover our beautiful planetarium walls with an ugly fire retardant white paint.

When the planetarium was finally erected and the fans were installed we realized we had to suspend the center of the dome from the roof of the mall. Without this support, the dome would deflate and collapse when the doors opened at show’s end and smother everyone inside! When the dome was inflated the first time the doors blew open because of the pressure, so we had to install spring loaded locks to keep the door closed. Also, each time the dome was inflated and deflated, more paint came off. Each night after closing, the dome had to be repainted to reduce the number of pinholes.

At the opposite end of the mall Skyscrapers members set up several telescopes and other displays highlighting members’ astrophotos and NASA space missions. This educational component provided a platform from which to speak to the public about astronomy, space science, and of course, about the Skyscrapers organization and membership in it. A lot of work went into creating and staffing those displays for the duration of our show. Dave recalls, “The projector was definitely underpowered for what we asked it to do. During the day the light coming in through the mall skylight was so bright it overpowered the images of the stars and the pinholes caused by the repeated inflation and deflation. So, during the day the projector was turned off.” Otherwise the portable planetarium and program were pretty uniformly received by visitors. During our 10-day run (April 7 – 17), over 9,000 folks paid 10 cents each to view our planetarium presentation. Once publicity had appeared in the Providence Journal about our endeavor, folks were actually making special trips to the mall to see our show. The mall management was ecstatic about the increased traffic, and Skyscrapers netted a profit of $300.In the April 1975 issue of The Skyscraper, Dave Armitage was quoted as saying, “Far above anyone’s expectations! It even beat out my expectations.” Membership increased, our Saturday night open houses were better attended, and the society garnered much respect. I personally think the mall project was a key turning point in the direction of Skyscrapers’ history. This episode was the primary “nexus” in a series of events that culminated in the revival of our society. I believe the success of our public outreach programs today are a direct result of the success we experienced at the Midland Mall in April 1975. We could accomplish anything we put our minds and souls to do!!! And finally, we actually beat the professional astronomers in creating an inflationary universe!! We also beat the Starlab folks in conceptual idea by about three years, and actual construction by two years. Though we called it a portable planetarium, it was hardly portable! I was a new member when the portable planetarium project began, having been elected into Skyscraper membership on January 4, 1975. I feel privileged to have joined the society during the time of its revival. An expanded version of this story, along with many more images of the project, can be found on the Skyscrapers web site at: http://www.theskyscrapers.org/1975-portable-planetarium-project Perhaps there will be a revival in the Rhode Island (Midland) Mall’s future as well. If you want to experience the universe firsthand then please visit any of the local observatories during one of their public open nights. Before packing up the family for a ride out to Seagrave Memorial Observatory in North Scituate on a Saturday night, or out to Ladd Observatory in Providence on the next Tuesday night, be sure to check their websites for the public night schedules and opening times. Frosty Drew Observatory in Ninigret Park, Charlestown, is open every clear Friday night. I will write about this south coast observatory in a future column. All of these facilities offer a unique observing experience. Keep your eyes to the skies. David A. Huestis