Reason for the Season - The Autumnal Equinox 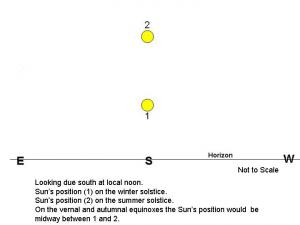 September—finally! The end of a brutally hot and humid summer. Well, not exactly. Meteorology-wise, the summer months include June through August. Astronomy-wise, this year summer began at 1:16 p.m. on June 21st (summer solstice) and doesn’t end until fall begins at 5:05 a.m. on September 23 (autumnal equinox).

Here in Southern New England, September usually brings us cooler and less humid days, and local amateur astronomers look forward to observing earlier and earlier in the evening. Hazy skies are replaced with transparent ones, which improve the view of the heavens dramatically.

While most everyone links the weather with the seasonal changes, I’m sure many more individuals don’t know the astronomical reason for those changes. Let’s start with summer and cycle through the seasons one by one.

Have you ever noticed how high the Sun arcs across the sky during the summer, or how low it arcs during the winter? It’s an astronomical cycle that only requires one’s eyes to observe, plus a little bit of time. I’m sure you’ve noticed the Sun rising/setting at various locations along your horizon during the year. One month it may be rising or setting directly in front of you, while at other times it may be either north or south of that same position. Astronomical circumstances account for the occurrence of the four seasons.

Also, with due respect to our neighbors in the southern hemisphere, our association of the seasons with the weather--summer (hot); winter (cold)--is strictly northern hemisphere biased, more particularly mid-latitude.

Here are some important facts to remember: The Sun does not physically move across the sky. For this discussion the Sun essentially rotates in space at a fixed position. The Earth (and all the other bodies of the solar system) orbit about it. Because the Earth rotates from west to east, the Sun appears to move in a westerly direction through our sky. Also, the Earth’s poles are tilted 23 1/3 degrees from the perpendicular and always point at the same fixed position in space. (During the nighttime hours we can observe the stars rotating around that point near the pole star Polaris.) In addition, there is an imaginary line in space called the celestial equator, an extension of the Earth's equator projected onto the sky.

Therefore, when the Earth orbits the Sun, the north and south poles are alternately tilted towards or away from the Sun. This simple graphic will help you to understand the cycle (http://www.creatorsfingerprints.com/images/aaak.jpg). The apparent effect in our sky is that the Sun appears to move north and south. See the accompanying artwork depicting this variation.

When the north pole is tilted towards the Sun, the northern hemisphere experiences summer, while the southern hemisphere experiences winter. (There’s that bias again.) On June 21st or 22nd, the Sun is as high in the sky as it can get. This event is called the summer solstice. Also, since the pole is tilted 23 1/3 degrees, a person at a latitude of 23 1/3 degrees north on the Earth's surface will see the Sun pass directly overhead at local noon. This line of latitude can be found on any Earth globe...it’s called the Tropic of Cancer.

After the summer solstice the Sun will begin moving farther south in the sky, the result of the north pole tilting away from the Sun. This year, on September 23rd, at 5:05 a.m., the Sun crosses the celestial equator, signaling the autumnal equinox—the beginning of fall for the northern hemisphere. A person standing on the Earth's equator will see the Sun pass directly overhead at local noon. On this date the Sun rises due east and sets due west. This time is ideal to determine what direction east/west is without using a compass. Day and night are also of equal length.

The Sun continues its southern migration until December 20th or 21st, when winter begins in the northern hemisphere. Called the winter solstice, the Sun is then as far south in the sky as it can get. Just the opposite of the summer solstice, a person standing at latitude 23 1/3 degrees south will see the Sun pass directly overhead at local noon. For the southern hemisphere summer begins. This line of latitude is called the Tropic of Capricorn, and it can also be found on an Earth globe.

The Sun then begins its welcome migration north again as the south pole tilts away from the Sun. When it crosses the celestial equator again, spring begins for the northern hemisphere. Occurring on March 20th or 21st, this event is called the vernal equinox. The Sun continues north until it once again reaches its highest position the sky on June 20th or 21st, the summer solstice.

So now that you have a better understanding of how the Earth’s axial tilt and orbit about the Sun affects the Sun’s seasonal position in the heavens, keep your "eye to the sky" and note its north and south migration during the course of a year. Become more aware of the sky events around you that most people take for granted.
.
Though you will not require a telescope to welcome in the fall season, there are still many astronomical delights to observe at Rhode Island’s fine observatories. Seagrave Memorial Observatory in North Scituate is open to the public every clear Saturday night. Also, Ladd Observatory in Providence is open every clear Tuesday night. Frosty Drew Observatory in Charlestown is open every clear Friday night year-round. Be sure to check all the websites for the public night schedules and opening times before visiting these facilities.