Pleasure at the Telescope: Observing Jupiter 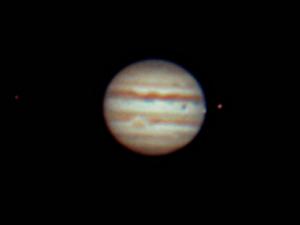 This shot has everything, nice detail of cloud bands, the Great Red Spot, Europa and its shadow during transit, and Ganymede and Io in the frame as well. Telescope used: 11

Since we lost Saturn to worthwhile telescopic viewing at the beginning of September when it sank below the western tree-line, we’ve had no bright planets to observe during a reasonable hour. Yes, in recent months you could have observed Jupiter, as well as Uranus and Neptune, around the midnight hour, but only dedicated stargazers took advantage of those viewing opportunities.

Beginning this month the local observatories will be focusing their telescopes on perhaps the most dynamic of all the planets, Jupiter. And if you own a telescope1 of any size, this time would be good to take it out and set your sights on our solar system’s largest planet.

Before we take a brief look at what Jupiter will present to even a casual astronomer, you will need to know where to look for Jupiter in the sky. On November 1st Jupiter rises almost due east around 5:30 p.m. However, wait for it to climb higher into the sky to ensure steadier seeing conditions. By 8:00 p.m. Jupiter will be about 28 degrees (three fists held at arm’s length covers this distance) above the horizon.

Jupiter currently resides in the constellation Aries, which is not an easily recognizable star pattern. Luckily Jupiter will be the brightest object in that area of sky, so you shouldn’t have any difficulty finding it. Furthermore, to Jupiter’s left you’ll notice the Pleiades star cluster in Taurus, so this clue should also assist you in locating it. And once you point your telescope at this bright beacon, you’ll immediately know you’ve found Jupiter.

Jupiter is a large planet (you could fit 1,321 Earths within its volume), so even a small telescope will show a keen-eyed observer much detail. On October 27 Jupiter was in opposition (opposite the Sun in our sky) and also at its closest distance from the Earth (369,941,598 miles) until 2022. For you native Rhode Islanders that’s further than Woonsocket, Westerly or Newport! Jupiter’s large diameter and its relatively close distance make the planet easily observable.

My favorite turn-of-the-century author, Garrett P. Serviss called Jupiter “one of the greatest pleasures that the telescope affords.” One of the first things that will catch your eye will be the Galilean moons. Galileo Galilei first observed them and Jupiter on January 7, 1610, so now the four moons collectively honor his discovery. They are: Io, Europa, Ganymede and Callisto. When several of the Galilean moons are visible at the same time, they sometimes appear in a straight line, parading around Jupiter in the plane of its equator. This astrophysical arrangement presents many interesting phenomena for us earth-bound astronomers to observe. (For those of you who love facts, Jupiter has 62 known moons total, the majority of which cannot be seen visually with even large amateur telescopes in a dark sky.)

When a moon passes in front of Jupiter and casts a shadow onto the Jovian cloud tops, it is called a shadow transit. Besides seeing the satellite’s shadow, you may also see the bright disk of the satellite traversing Jupiter’s clouds at the same time, though this event is more difficult to observe. A moon may also pass behind the planet, which is called an occultation. Jupiter’s shadow can even eclipse a satellite as well; gradually the moon will either blink out or reappear. Also, it's fun to watch all four moons line up on one side of the planet. I love to watch Jupiter over an extended period of time during the course of one evening because the view is dynamically changing as you watch.

Next it’s time to look at Jupiter’s disk, the ball of the planet. Even a small telescope will reveal the more prominent dark bands/belts and lighter zones in Jupiter's cloud tops. Though the Great Red Spot (GRS), an almost four hundred year old storm, is not as red as it once was many years ago, it should be fairly easy to see if it has rotated into view2. A six-inch telescope or larger may be needed to catch a glimpse of it. Keep in mind that Jupiter rotates once in ten hours, making it possible to see the entire planet in one or two nights of observing.

Jupiter is going to be viewable until about mid-March 2012, but don’t procrastinate. You never know how inclement the weather may become. And don’t forget, winter is coming soon. So I suggest you observe soon and often. Jupiter and his moons are in constant motion, and it’s always a pleasure to see what event may occur when you are at the eyepiece of your telescope or at one of the fine telescopes at the local observatories.

It’s Jupiter observing season. By Jove, get out there and enjoy one of the visual pleasures that a telescope can provide.