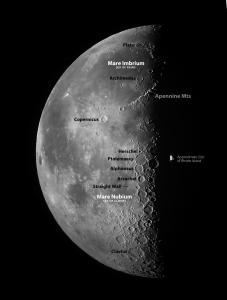 Anyone with even a casual interest in astronomy knows that sometime during the summer we are treated to a fine display of shooting stars. This meteor shower is perhaps the most well known and the most widely observed because more folks are outdoors during the summer months. Some more well-informed people may even be able to specify the month of this annual shooting star performance. But many are at least familiar with the shower’s name: the Perseids.

Unfortunately the peak of this year’s Perseids, August 12-13, occurs during the Full Moon. The Moon’s bright light will prevent all but the brightest members of this shooting star display from being observed. You might get lucky to spot a fireball despite the moonlight, and since the Perseids can be seen in much smaller numbers for several weeks on either side of the peak night, you might try to catch a few when the Moon isn’t quite so full.

While the Full Moon will interfere with this year’s Perseid meteor shower, there is a lunar phase which is not observed as regularly as those phases leading up to and just after full. Today’s column will highlight a few of the features that can be observed during the Last (or Third) Quarter Moon. Binoculars or a telescope will be required to adequately observe these formations.

Space does not permit me to review the reason for the cycle of lunar phases, but you can refresh your understanding by visiting http://www.theskyscrapers.org/content5074.html for a thorough explanation.

The next Last Quarter Moon, which always rises around midnight, is on August 21. You’ll need to wait for it to ascend higher into the sky so you can acquire a good view. The best time to observe this phase is a couple of hours before morning twilight. At sunrise the Moon will be due south of your location and at its highest point in the sky above the southern horizon.

The accompanying Moon map will help you to locate the lunar features I will highlight. The Moon’s north pole is at the top of the map, while its western limb is to the left. Keep I mind that binoculars will provide you the same view that the map shows. Various telescope designs reverse the image right to left and up and down. You’ll need to orient your telescopic view to the map using a prominent surface feature as a guide.

There are many formations that can be observed during this lunar phase. And even if you have observed some of them during a different phase of illumination, the ever changing sunlight angle can reveal subtle details not seen during other phases.

Also, most native Rhode Islanders know that our state is often used as a unit of measure. East to west it is approximately 37 miles across, and the north to south dimension measures 48 miles. Keep these figures in mind when comparing to crater sizes. Here are a few Last Quarter lunar features you should try to observe.

On the edge of Mare Imbrium (Sea of Rains – yes, early astronomers once thought the Moon possessed seas and oceans) is the crater Archimedes, an almost perfect circle about 52 miles across. Under low magnification its floor is almost featureless. A short distance to the southeast and seeming to extend from the terminator (during Last Quarter the terminator defines the sunset point) is the Apennine Mountains. This range contains some of the tallest mountains on the lunar surface. Carefully scan up and down this region. Some of the mountain bases may already be in shadow while their peaks can still be catching glimpses of sunlight.

As we continue our journey south and to the west we encounter the absolutely beautiful crater Copernicus. While this crater is not the largest (only 53 miles across), the detail one can observe is remarkable. Its walls show very fine detail and the crater floor has an incredible central peak. In fact, during one perfect evening many moons ago while using the 8 ¼-inch Clark refractor at Seagrave Observatory, I was able to look deep into this crater and see where a huge boulder had tumbled down one of its steep walls. Outstanding!

Next please locate and examine the crater chain that comprises Ptolemaeus, Alphonsus and Arzachel. The detail that can be seen here is exquisite. Ptolemaeus is an old crater about 95 miles in diameter. Another impact, Herschel, blasted a 25-mile-in-diameter hole into its northern rim, and Ptolemaeus also shows smaller impacts on its crater floor. Alphonsus, 74 miles across, has a well preserved central peak, where Ptolemaeus does not. Arzachel is roughly 60 miles in diameter and is very well preserved, showing great detail in its walls and central peak.

One of the most fascinating features on the lunar surface is the Straight Wall. This feature lies to the southwest of Arzachel and sits in Mare Nubium. This formation is a very impressive. It is a fault or escarpment approximately 74 miles long, 1.5 miles wide, and no more than 1,000 feet above the floor of the Mare. While it may look very steep, its slope is no more than 20 degrees. The Straight Wall’s appearance changes dramatically with the sun angle, so try to observe it during other lunar phases as well.

And finally I can’t end this lunar tour without noting crater Clavius. Sci-fi fans will recall that the monolith in the movie 2001: A Space Odyssey was uncovered in this crater. Clavius is huge, measuring 140 miles across. Though several smaller impacts have marred its floor, the inner crater walls are high and well defined. Several impacts have also occurred along the rim.

I hope this brief tour of our closest neighbor in space will encourage you to spend a few hours examining the lunar surface with whatever optical instrument you can use. The more magnification one is able to apply, the more detail one will be able to discern. Binoculars and telescopes should be outside collecting moonlight, not inside collecting dust in a closet or basement.
.
While you won’t find any of the local observatories open after midnight to observe the Last Quarter Moon, don’t forget that they are open to observe the heavens at more convenient times. Seagrave Memorial Observatory in North Scituate is open to the public every clear Saturday night. Also, Ladd Observatory in Providence is open every clear Tuesday night. Frosty Drew Observatory is open every clear Friday night year-round. Be sure to check all the websites for the public night schedules and opening times before visiting these facilities.