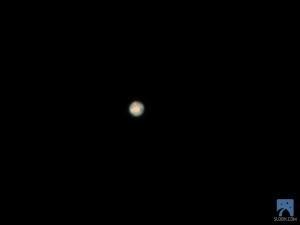 Image of Mars taken on February 24 by Dave Huestis using one of Project Slooh's robotic telescopes in the Canary Islands.

What immediately pops into your head when I mention Mars? If you had asked me back in the sixth grade (1964-65), I would have answered H.G. Wells’ War of the Worlds, for it was then that I first read that great science fiction novel about Martians invading our world. From then until the early 70’s I was aware the United States had sent several unmanned spacecraft (Mariner series) to explore our desert neighbor. Then came the Viking landers in 1976. And now I think about the surviving Mars rover Opportunity who, like the Energizer Bunny, keeps “going and going.” I’m also looking forward to the landing of a small car-sized rover in August called Curiosity.

When I’m able to show a young child a great view of Mars through Seagrave Observatory’s 8-inch Alvan Clark refractor telescope or Ladd Observatory’s 12-inch Brashear refractor, I often wonder if that young person may be the first earthly explorer to set foot upon its rusty soil. He or she may get to visit the crash or landing sites of our earlier unmanned explorations and get to see firsthand the magnificent “geological” structures explored by the rovers. This adventurer will be able to step up to a rock outcropping and pick away at the formation hoping to discover evidence of past life. (Much like I imagined doing as I watched the fantastic images transmitted to Earth from the Mars rovers.)

For this article I am not going to recount the history of Mars observations or spacecraft explorations other than to say the initial accounts of possible “canals” on Mars at the end of the 19th century captured our imagination and most assuredly hastened our spacecraft exploration of this desolate world. If you would like some historical background, visit Skyscrapers web site at http://www.theskyscrapers.org/ and look for an article titled “Mars History Highlights 2012.”

It’s been over two years since I’ve written about our planetary neighbor Mars. Why? As it is with most things astronomical, events in our solar system occur in a cyclic manner. Earth and Mars have a close encounter every 26 months. During the last few months the Earth has been catching up to Mars in our respective orbits, since the Earth orbits the Sun (one year) in less time than Mars does (1.88 years). On March 5 these two planets will be at their closest distance from each other: 62,652,214 miles. Unfortunately not all Mars close encounters are favorable ones. That fact is due to the eccentricity of Mars’ elliptical orbit and its distance from the Sun. And just to put that distance into some perspective, back on August 27, 2003, Earth and Mars were a mere 34,646,418 miles apart.

For some Mars observers it might be a challenge to observe much detail considering how small the disk of the planet will appear even at its closest approach. However, don’t let Mars’ small image size deter you from gazing at this planet that has stimulated our collective imagination for over a century.

This brief Mars observing guide will help you to discern and appreciate the planetary detail a telescope may show you of this neighboring world. While this 2012 apparition is not one of the closer ones, medium-sized backyard telescopes should still coax some detail out of the small image. And of course the local observatories will be able to share even more Martian detail when steady seeing allows them to “crank up” the magnification.

If you haven’t begun to observe Mars on your own prior to reading this column, the next clear night would be a good time to drag your telescopes out and have them collect the light of all the heavenly bodies, instead of collecting dust in storage. After we and Mars are closest on March 5, the Earth effectively laps our neighbor due to our greater orbital speed. After just one week we will be just over half a million miles farther apart. A week later it will be an additional 1.5 million miles. So don’t procrastinate. You’ll observe more detail if you start your Mars observing program right away.

First you will need to locate Mars in the sky. Just after sunset on March 1, Mars will be the red object about ten degrees (a fist held at arm’s length gives this measurement) above the eastern horizon. You should wait for it to climb higher into the sky and out of any horizon haze and turbulence. By 9:00 pm Mars will be almost 40 degrees above the horizon and awaiting your scrutiny. It would be hard not to notice Mars, for its pumpkin orange color is very distinct.

By that time the sky will also be completely dark, and you’ll be able to see it in relation to the background stars. During this Mars observing season it will remain within the constellation of Leo, the lion. It currently resides below the hind quarters of this sky picture. Mars will move westward in the sky towards the bright star Regulus, which anchors the backwards question mark pattern called the Sickle and represents the lion’s heart. Mars won’t reach Regulus, because in mid-April the planet will move eastward in the sky.

Once you focus in on Mars with a telescope, the first detail you will notice will be the color. It’s not quite red, but not quite orange. Perhaps Crayola has a hue that best describes what we can see. How would you describe it? The second detail that will catch your eye will be the North Polar Cap (NPC). It’s definitely a bright white feature that can be seen because Mars’ north pole is currently tilted towards the Earth. It is late spring in Mars’ northern hemisphere, so the NPC has had some time to melt. Mars’ Summer Solstice occurs on March 30, so as more time passes, an observer should be able to notice the NPC shrinking and breaking up. Mars’ image will be fairly small, so one should wait for steady seeing conditions to observe as much detail as possible. The NPC will continue to shrink as the Martian summer progresses, while the Earth/Mars distance will be increasing and the image size will be decreasing.

While the NPC should be rather apparent, the rest of the planet will appear as a rust-colored beach ball. As you more carefully scan this alien world, you should begin to notice several dark features on the Martian surface. These features are the underlying rock exposed by the shifting sands during intense dust storms. The relatively small image will make it somewhat of a challenge to identify much detail, and the dark surface features may be fleeting. Despite this handicap, a keen-eyed observer should be able to catch a few glimpses of a dark area like Syrtis Major or a bright one like Hellas Basin. You may be able to identify some of Mars’ dark and bright surface features by utilizing a utility called Mars Profiler provided online by Sky and Telescope magazine (http://www.skyandtelescope.com/observing/objects/javascript/mars),

Also please keep in mind that Mars rotates once in 24 hours and 38 minutes. That means if you observe a feature at a specific location at a specific time on a given night, you’ll have to wait an additional 38 minutes each successive night for it to be at the same spot, since the Earth rotates once every 24 hours.

Though Mars is noted for producing dust storms that can globally enshroud the planet, therefore preventing any of its surface features from being observed, it is unlikely that will happen during this opposition. Those storms are active when Mars is at perihelion (closest to the Sun), and that won’t happen until January 2013. During Mars’ current orbit about the Sun, its aphelion (farthest distance from the Sun) was on February 15. Major dust storms are unlikely, so take your time observing and note as much detail as your telescope and local weather conditions allow.

In conclusion, be patient when observing Mars. The planet’s disk will be small. Wait for steady seeing conditions. Don’t try observing Mars if the stars are twinkling. Take a knowledgeable glimpse of an alien world that inspired generations of astronomers and science fiction writers alike to ponder the existence of Martian life-forms.

Drag out those telescopes and expose them to the light of the universe. One day your children or your grandchildren may set foot upon this exciting landscape.

If you don’t own your own telescope (or the view through the one you do own is too small to see much detail) plan on visiting Seagrave Observatory on Peeptoad Road in North Scituate on any clear Saturday night. Or visit Ladd Observatory located on Hope Street on Providence’s East Side on any clear Tuesday night. Also consider visiting Frosty Drew Observatory in Charlestown. Frosty Drew observing begins at 6:00 p.m. with no set end time.
Dress warmly and take advantage of the views these larger telescopes can provide. Please check the above websites for any cancellation notices before venturing out for a visit, since snow and ice at the facilities can force closures even when the skies are clear.

Don’t forget, we switch to Daylight Saving Time on Sunday, March 11, at 2:00 am, so during mid-March be sure to double check the above web sites for opening time changes.