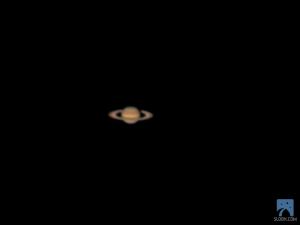 A writer always needs a good headline to entice the reader to sit up and take notice. And I’m sure several of you surely did so when you read the above title. Any one with even a little knowledge of mythology knows that Saturn was the Roman god of agriculture, while the Greek counterpart was Cronus. So why did I choose the word recruiter as a moniker for the sixth planet from the Sun?

“When Saturn is in view the owner of a telescope may become a recruiting officer for astronomy by simply inviting his friends to gaze at the wonderful planet. One returns to it again and again with unflagging interest, and the beauty of the spectacle quite matches its singularity.”
So wrote astronomer Garrett P. Serviss in his 1901 book, Pleasures of the Telescope. Truer words have never been written. Anyone who has had the opportunity to observe this magnificent ringed-world through a telescope of any size can attest to the verity of the above statement. And despite detailed images of Saturn by visiting spacecraft, the Hubble Space Telescope, or even earth-based instruments using the latest technology, observing Saturn firsthand through a telescope can still inspire the amateur astronomer and casual stargazer alike.

Right now is a good time to be recruited by Saturn. While this article is primarily intended for individuals with telescopes, those of you who do not own these wonderful instruments can still learn about the Saturnian system and then visit one of the local observatories (see ending paragraph).

Some of my associates at Seagrave Memorial Observatory have been observing and imaging Saturn for months now. They arose in the wee hours of the morning to conduct their observations. As the months have passed, Saturn has risen earlier and earlier each evening. In fact, on April 15, Saturn was at opposition (opposite the Sun in the sky and at its nearest distance to the Earth—approximately 810,575,000 miles—until next year). That means it rose in the east at sunset. And each night since it has appeared higher and higher in the sky.

On June 1 at around 9:15 pm the sky will be sufficiently dark to locate Saturn. It will be about 41 degrees above the south-southeast horizon, nestled among the stars of the constellation Virgo. Though most of the stars of Virgo are not very prominent, especially in a light-polluted environment, the constellation’s bright star Spica will be less than five degrees from Saturn. This distance is equal to ten full moon diameters.

Spica is very easy to find. There is an easily memorized phrase which uses the handle in the Big Dipper asterism of Ursa Major to find it: arc to Arcturus, speed on to Spica. Saturn will be just a little bit brighter, but will have a yellowish hue to it, looking a little paler than Spica’s white appearance. Want another clue? On June 1 the waxing gibbous moon will be toward the lower left of Spica and Saturn. And if you can’t wait until that night, on the evening before, May 31, the Moon will be just four full moon diameters (two degrees) to the lower right of Spica.

Saturn is indeed a pleasure to observe even if you own a small telescope, so make every effort to focus in on this wonderful planet. The very first feature that will catch your eye is the rings, the beautiful attribute for which Saturn is most noted. In Serviss’ 1901 book, Other Worlds, he wrote, “Many telescopic views in the heavens disappoint the beginner, but that of Saturn does not. Even though the planet may not look as large as he expects to see it from what he has been told of the magnifying power employed, the untrained observer is sure to be greatly impressed by the wonderful rings, suspended around it … No previous inspection of pictures of these rings can rob them of their effect upon the eye and the mind. They are overwhelming in their inimitable singularity, and leave every spectator truly amazed.”

During the period of Saturn’s almost 29½ year orbit of the Sun, our Earthly perspective affords us a view of this magnificently ringed world from different angles above or below the ring plane. Since September 2009 we have been observing the north face of the rings, which are now tilted almost 14 degrees to the horizontal and will continue to open slightly more before we lose Saturn in brightening twilight by the end of September. This tilt will increase each year until 2017 when the rings will be open at their widest angle of 27 degrees.

Saturn rings are especially fascinating to observe as they open up and present a broader surface to view. It is amazing that Saturn’s rings are visible at all, considering the planet’s distance from the Earth and the fact that the ring plane is only about 328 feet thick (just larger than the length of a football field). Although there are hundreds of ringlets, you shouldn't have any difficulty seeing the separation between the primary “A” (outer) and “B” (inner) rings, called the Cassini Division. This gap is only 2,175 miles wide. In comparison, the width of the “A” ring is 9,321 miles and the “B” ring is around 16,032 miles across.

The rings are composed of irregularly shaped dirty snowballs, ranging in size from grains of dust to many particles the size of pebbles. There are also some “boulders” as large as a car or small house-sized bodies. They all orbit Saturn along the planet’s equatorial plane.

While Saturn’s rings are slowly de-orbiting and will eventually all “rain” down onto his cloud tops (in 50 to 100 million years or so) and cease to exist, there’s no excuse, except for bad weather, not to catch a glimpse of Saturn with your own telescope or to visit one of the local observatories.

Once you tire of ring watching you can turn your attention to the disk of Saturn himself. The light-colored bands and zones in Saturn’s cloud tops are much less prominent than those of Jupiter. (Very little cloud detail can be seen in small telescopes.) However, bright “spots” do develop from time to time. In 2011 a so called “Serpent Storm” (due to its serpentine shape) stretched completely around Saturn’s North Temperate Zone. It has since dissipated.

In addition, both before and after opposition, one can observe the shadow of Saturn projected onto his rings. Also, as the observing angle of Sun/Earth/Saturn increases a keen-eyed observer should have no difficulty in detecting the shadow of the rings upon Saturn’s cloud tops. These particular viewing circumstances provide a stunning 3-D effect of the Saturnian system.

In conclusion, locally you can also see about 1/8th of Saturn’s 62 known moons, depending upon which size telescope is used. In order of size and brightness they are Titan, Rhea, Iapetus, Dione, Tethys, Enceladus, Mimas and Hyperion. The first five or six of the above can be observed in a dark moon-less sky using the 12-inch Brashear refractor at Ladd Observatory.

I know that the weather has been absolutely horrible this spring. Hopefully as we move closer to June the weather patterns will change to afford us stargazers some better opportunities to point our telescopes skyward and observe one of the most beautiful objects in our solar system — the magnificent planet Saturn.

However, if you don’t have a telescope or the one you do own does not provide a great view of Saturn, I encourage you to visit one of the local observatories. Seagrave Memorial Observatory in North Scituate (http://www.theskyscrapers.org) is open every clear Saturday night for observing. Ladd Observatory (http://www.brown.eduDepartmentsPhysicsLadd) in Providence will be only open in June for the transit of Venus on the 5th. It will be closed for the remainder of June and all of July for annual maintenance. Also consider visiting Frosty Drew Observatory (http://www.frostydrew.org) in Charlestown on every clear Friday night. Please visit the respective websites for details.
All of the telescopes at these facilities can provide wonderful images of Saturn and his retinue of moons, as well as a wide variety of double stars, gaseous nebulae, globular and open clusters, and galaxies. The universe is at your eye for you to explore. Come share the wonders that only a telescope can provide.