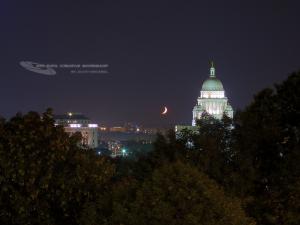 What’s shorter than a fuse on a Fourth of July firecracker? This column! During the last couple of months my columns have been fairly lengthy to inform the reader adequately about special astronomical events. July is a relatively quiet month astronomically speaking, so I will briefly suggest a few sky events one should strive to observe. And you won’t require binoculars or a telescope to enjoy the view.

While it may appear counter intuitive to northern hemisphere residents, the Earth is at aphelion (farthest from the Sun) on July 4 at about 94,510,232 miles. It just so happens that the tilt of the Earth’s polar axis has the northern hemisphere tipped toward the Sun at that time, providing more direct sunlight for us. At perihelion (Earth closest to the Sun) back on January 4, the Earth-Sun distance was 91,406,283 miles. The difference, just over three million miles (or 7 percent), has little effect on our planet. However, northern hemisphere summer is warmer than its southern hemisphere counterpart because there is much more land mass north of the Earth’s equator to absorb the solar radiation.

During the first week of July casual stargazers can get a glimpse of Mercury. On July 1 this hellish world can be found about 12 degrees above the western horizon during bright evening twilight. Each successive night it will be found closer and closer to the horizon. Soon it will be lost in the Sun’s glare.

Also, high in the southwestern sky after sunset you can still see Mars and Saturn. At the beginning of the month they will about 23.5 degrees apart. By month’s end they will have narrowed that distance to only eight degrees. If you have a telescope Saturn will still display a great image. However, Mars will be quite small and show little or no detail, since it will be so far away (132,480,564 miles on July 1 and still increasing).

The morning sky will have its share of beautiful scenes to view as well. Jupiter and Venus will be brilliant beacons in morning twilight. Both can be found in the constellation of Taurus.

And finally, there are two meteor showers at the end of July. These shooting star displays are spread out over a couple of days and therefore overlap. Though a waxing gibbous Moon will pose some interfering moonlight before midnight, once it sets you’ll have several hours of dark sky to observe a few meteors blaze across the sky.

The first meteor shower, the Delta Aquarids, peak from July 28-30, with the morning of the 29th being the best time to observe. Once the Moon sets around 1:46 am EDT, an observer well away from light polluted skies can expect to see about 20 bright, yellow meteors per hour. Because these meteors nearly broadside the Earth, their speed is a moderate 25.5 miles per second.

The second meteor shower you should observe comes a day later on the morning of July 30 with the peak of the Capricornid meteor shower. The Capricornids are also yellow meteors and are noted for producing brilliant fireballs. They are slow interplanetary interlopers, hitting our atmosphere at around 15 miles per second. You can expect only 15 meteors per hour once the bright Moon sets around 2:48 am EDT on the morning of the 30th.

Aquarius and Capricornus, the constellations from which these shooting stars appear to emanate from, will be just less than halfway between the southern horizon and zenith (straight up) around 2:00 am. And don’t forget — wait until the bright waxing gibbous Moon sets so you can maximize your viewing pleasure.

Though it doesn’t get sufficiently dark to observe until after 9:15 pm or so during July, two fine observatories remain open during the summer months for observing the heavens. Ladd Observatory in Providence will be closed during July for annual maintenance. However, Seagrave Memorial Observatory in North Scituate is open every clear Saturday night for observing. And if you wish to observe from perhaps the darkest skies in Rhode Island, grab your passport, pack an overnight bag, and make the trip down to Charlestown and visit Frosty Drew Observatory on any clear Friday night. Please visit the respective websites for details.
As always, keep your eyes to the skies.