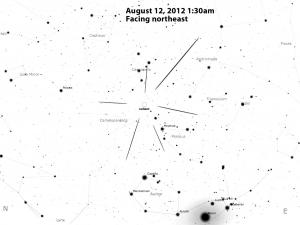 The Perseid meteors will originate from the constellation Perseus

The upcoming Perseid meteor shower of August is the most widely observed meteor shower of the year. This ranking is because families are spending more time outdoors during the summer season, enjoying cookouts, camping, or any other assortment of late evening activities.

Years ago I remember seeing many meteors one summer while watching a screen at a drive-in theater. While not the most productive meteor shower of the year (the December Geminids hold that title), the Perseids are a fairly consistent display of shooting stars.

Unfortunately last year the Full Moon ruined our viewing of the Perseids. However, for 2012 we will be much more fortunate. The peak of activity occurs on the night of August 11-12. That date puts the best part of the display on Saturday night through dawn’s early light on Sunday morning, with the majority of shooting stars seen after midnight. Though a waning crescent Moon will rise around 1:00 am in the same general direction of the Perseids radiant point (area of sky from where the meteors appear to radiate), it should only slightly diminish the number of meteors to be seen.

Perseus is well up in the northeast sky after midnight. If you can see a pattern of stars that looks like a sideways “M” or “W” (that’s Cassiopeia), Perseus is below it so you’re looking in the correct direction.

We can only hope that the weather will cooperate and provide us with a shower of meteors and not one of rain.

The Perseids occur at the same time each year when the Earth intercepts a stream of particles that was liberated from the surface of Comet 109P/Swift-Tuttle and left in orbit around the Sun. Most of the meteors an observer sees are no larger than a thumbnail. They become visible as they plunge into our atmosphere at 134,222 miles per hour and disintegrate as they blaze across the heavens.

Also, the Perseids are usually green, red or orange in color, and some members of this shower are bright and often produce exploding fireballs. From a dark sky location one should be able to count possibly a little less than 60 meteors per hour due to the proximity of the Moon.

While you will be able to count some meteors before midnight, the number of meteors will dramatically increase after the midnight hour. Once that pesky Moon rises above your horizon and tree-line, it would be best to try to block it from view in some manner. Then observe in a direction some distance away from the radiant and the Moon. While other minor meteor showers occur at the same time, and of course there are sporadic meteors or other random space junk entering the atmosphere all the time, you know you’ve seen a Perseid if you can track its streaking trail back to the radiant.

If the weather does not cooperate or you are unable to observe on peak night, try your luck on the nights before and after. You won’t see 60 meteors per hour, but you may catch a couple of dozen or so. The best time to observe will still be between midnight and dawn.

If you happen to stay out and observe until early in the morning I want you to take note of a couple of other interesting astronomical sights.

Even before you finally see the Moon rise above your tree-line you will also notice a bight star-like object. That will be Jupiter. In addition, a little later you will see an even brighter object rise below the Moon. That will be brilliant Venus. And although it will still be late summer, the eastern sky will be full of winter constellations and asterisms, like Taurus, the Pleiades, the Hyades, along with mighty Orion. After most likely swatting mosquitoes all night you might wish that it was winter already!

Round off your observing session with a look to the west to see the band of starlight that stretches towards the western horizon. It’s our home galaxy, the Milky Way. And finally look towards the north to see Ursa Major (the Big Bear/Dipper) as it skims the horizon.

Then retire for the morning and get some well deserved sleep, knowing that you were one of perhaps thousands of stargazers who observed one of Mother Nature’s beautiful displays.

While you don’t require a telescope to observe a meteor shower, the local observatories do provide some great instruments with which to explore other wonders of the universe. Saturn will continue to be the primary focus for the visitors to these facilities. Please check the websites for further details.

Seagrave Memorial Observatory in North Scituate is open for public viewing every clear Saturday night. Our summer hours are from 9:00 – 11:00 pm, weather permitting.

Ladd Observatory in Providence continues to be closed for maintenance.

The darkest skies in Rhode Island are available to stargazers every clear Friday night at Frosty Drew Observatory in Charlestown.