Meteors and Planet Pairings for November 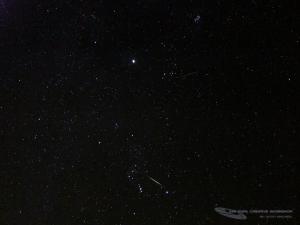 As the late sunsets of summer (along with the heat, humidity and hazy skies) came to an end, my astronomy associates and I welcomed in the fall season. The biggest plus is that we can begin our observing sessions at a much earlier time in the evening. And besides that opportunity, cool or even chilly evenings often provide crystal clear and steady skies to explore the heavens.

Another factor that comes into play at the beginning of November is the end of Daylight Saving Time. On Sunday, November 4, at 2:00 a.m. local time, much of the United States will switch back to Standard Time. Clocks will have to be set back one hour. The saying, “spring ahead, fall back” is often quoted as a reminder about what one needs to do. By doing so also allows astronomers to observe one hour earlier.

But before we implement that timely annual ritual, the heavens will provide a beautiful sky scene on the first day of November. The waning gibbous Moon and Jupiter will rise above the eastern horizon around 7:30 p.m. where Jupiter will be the bright object above and to the left of the Moon. They will be about one degree apart, which is two Full Moon diameters. This conjunction (when two astronomical objects appear close together in the sky) will be a very beautiful sight, and I recommend you try to capture a few images to share with your friends and family.

If you are an early riser I’m sure you’ve noticed brilliant Venus in the eastern sky before sunrise. Venus is so bright it can easily be seen even in strong morning twilight. On the 11th it will be very close to a crescent Moon.

Usually most meteor showers are best observed after midnight, but during the first couple of weeks of November there is a long duration minor shower called the North Taurids. These meteors, which are the remnants of Encke’s Comet, peak around the 12th. The good news is that the Moon is New on the 13th, so it won’t interfere with observing as many meteors as possible. During normal years, including 2012, the peak rate is only about five meteors per hour.

However, some researchers predict the Earth may intercept a denser part of the “swarm” of particles either this year or sometime soon as part of a 61-year cycle of enhanced activity. Such activity has included the increase in the number of bright fireballs as well. While this scenario is not carved in stone, eh, meteors, with the Moon out of the way I would definitely check the sky from time to time centered around the 12th to see if the sky is ablaze with shooting stars.

The North Taurid meteors radiate from the constellation Taurus the Bull (visible soon after sunset in the eastern sky), not too far from the well known and easily visible Pleiades star cluster. They enter the Earth’s atmosphere at approximately 17 miles per second, are yellow in color, and often explode as fireballs, which then fragment into multiple meteors.

The second meteor shower to observe in November is the Leonids. Though this major shooting star display now only produces about 20 bright meteors, usually green or blue, per hour at peak, observing conditions will be favorable to enjoy the sky show.

We’re certainly in luck this year. First, the shower peaks around 4:30 a.m. on Saturday, November 17. Second, a waxing crescent Moon will set around 7:30 p.m. on Friday. Therefore it will not interfere by beaming moonlight throughout the sky during the meteor shower’s peak display between midnight and dawn.

While the meteors can be seen practically anywhere in the sky, you know you’ve spotted a Leonid if you can trace the meteor’s path back to the shower’s radiant point (where the meteors appear to emanate from) in the Sickle (backwards question mark) asterism in Leo.

The Leonids hit our atmosphere nearly head-on at about 44 miles per second. For this reason the display produces many fireballs, with about half of them leaving trains of dust which can persist for minutes.

Mid-November can produce some cold temperatures, so dress warmly, get comfortable, and do try to stay awake as you watch for “burning rocks” to blaze across the sky. And if you can conduct your observing session from a light pollution free environment you’ll be able to enjoy the best view this meteor shower can offer.

As the month draws to an end we’ll have a couple of beautiful conjunctions. As dawn begins on the morning of the 26th and 27th you’ll find Venus and Saturn less than one degree (two Full Moon diameters) apart, low in the east-southeast. On the 28th Jupiter and the Full Moon will also be less than one degree apart.

While there are many objects in the heavens for you to discover and explore, during the next several months the local observatories will be focused on Jupiter. The view provided by the telescopes at these facilities is simply magnificent. Be sure to check all the websites for the public night schedules and opening times before visiting these wonderful observatories.

Seagrave Memorial Observatory in North Scituate is open to the public every clear Saturday night.

Ladd Observatory in Providence is open every clear Tuesday night.